Below 2C
Home Climate Climate Emergency Climate Action: Why Are We So Stuck? 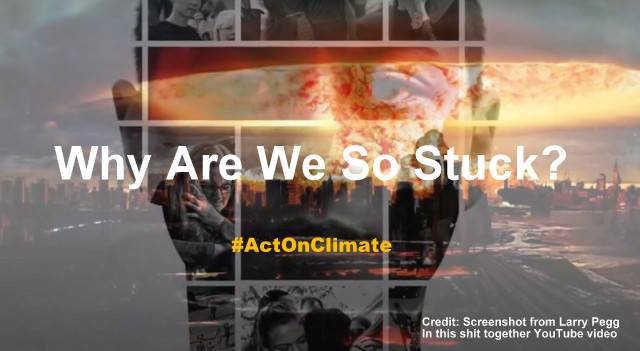 Canada’s recent heat records, wildfires and over 450 deaths are the tip of a quickly melting iceberg. Around the same time, a leaked IPCC draft report warned of just how close we are to a cascading failure of our precious ecosystems. So what’s the response from our so-called ruling elite? A performance…best described as spectacle, sympathy and silence. So why are we so stuck like a deer in the headlights asks Brad Zarnett in the following post from his Climate is Coming for Us series?

Why Are We So Stuck?

First the corporate controlled media pounces on the opportunity to attract eyeballs and show pictures of heat exhausted people, volunteers handing out water and towns devastated by wildfires. Next, corrupt politicians (puppets of the .0001%) offer sympathetic looks, promises to help those in need and platitudes about how Canada is working hard to address climate change. And finally, in the last act of this cynical performance we get deafening silence as to why we can’t seem to engage with this emergency in any meaningful way?

First, let’s be clear – it’s not you and I who are stuck. We’re not driving the failed policy. That psychopathic effort is being driven by the planet’s new de facto political leaders; the corporate elite and billionaire hoarders who are fighting to keep their capitalist wet dream alive.

Secondly, let’s not confuse where the problem lies. It’s not a technological problem – we have the solutions at our fingertips. It’s not a business case problem – that’s a ruse and a distraction to avoid or delay costly regulatory changes. It’s not an investment problem – governments have made it clear that they can borrow as many trillions as they want when it comes to starting a war or paying corporate bailouts. The problem is one of ideology, culture, power and greed.

It feels good to be at the top. To have all the money in the world. To make the rules or at least to be consulted about them. It’s like being a King. People don’t give up that kind of power. They fight for it using every tool at their disposal, and that’s a big war chest when you control trillions of dollars, mainstream media and most politicians from around the world.

Let’s assume for a moment that those with the power, the .0001%, aren’t complete psychopaths. They understand that the planet is warming but they see it through another lens. A lens that’s a result of their life experience – a world where deregulated capitalism, low investment taxes, offshore accounts, markets and money can solve any problem.

It’s understandable. They grew up in this system or at least lived in it for the better part of their lives and they’ve benefited greatly. It’s the system from which they achieved their wealth and status (or inherited it). It’s intertwined with everything about them; their home(s), their job, their possessions, their friends, and the ego and power that comes from succeeding in that system. And since most people are inclined to favour what they know, it’s no wonder that they have difficulty envisioning a world that doesn’t look much different from the flawed system that lies before us.

Self interest and greed have merged with the dangerous fantasy that the toxic system that created the problem will somehow save us. And this ideology has infiltrated the policies of nearly every government and corporation on the planet.

The bottom line is that the elite live in an ideological echo chamber of wealth and privilege and it’s the foundation of their worldview. It’s also important to understand that a big part of that echo chamber is to convince themselves that they deserve everything they have. Their success is due to hard work and their cunning intelligence, and that your lack of success is due to your laziness and nothing else. It’s your fault – not ours. After all, we live in a meritocracy…don’t ya know. It’s a nice little fantasy if you can get people to believe it.

Now let’s step back and look at the bigger picture. We live in a world that has spent decades building and reinforcing a culture that glorifies and celebrates the capitalist ideology. A culture that pushes the narrative that unfettered capitalism and free markets (that suit the .0001%) are the greatest creator of innovation and wealth that the world has ever seen. A culture that uses the corporate controlled media to parade psychopathic billionaires in front of us to promote their self-serving ideas of how deregulated capitalism can find win-win solutions to even the most challenging environmental and social problems (we’re still waiting on this promise). A culture that peppers us with the idea that by reducing taxes on the investment-savvy rich, we will spontaneously create jobs and build wealth for society as a whole.

And of course all of this is weaved together with the ongoing drip of propaganda that tells us that government is wasteful and that you cannot trust them with your money. To believe anything else is communism. 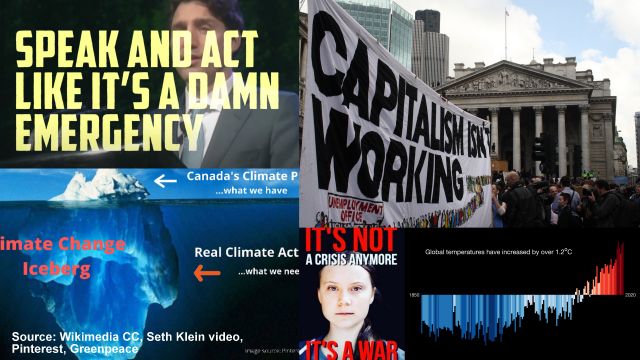 We are stuck staring into the headlights as climate change comes racing towards us. Those who have the largest say in how we should address this challenge seem either unwilling or unable to conceive of a system that doesn’t place them firmly at the top. The need for urgent and disruptive systems change is being blocked by the most powerful people on the planet.

Before I continue, it’s fair to ask, don’t the ruling elite fear an unraveling climate like the majority of humans? Of course they do but greed and a cult-like adherence to capitalism is clouding what should be a clear path forward.

The problem is that they’re trying to reconcile two opposing ideas:

Self interest and greed have merged with the dangerous fantasy that the toxic system that created the problem will somehow save us. And this ideology has infiltrated the policies of nearly every government and corporation on the planet.

So at this point it would seem that the .0001% find it more palatable to maintain their wealth-protecting system in the face of certain upheaval rather than to address our ecological problems from a regulatory angle which will undoubtedly cause them to lose some of their wealth and power.

The Narrative is a Dangerous Illusion

Maybe it’s just a failure of imagination. A tiny group of people who have the clout to force meaningful change are sticking with the myth of capitalism; a system that funnels wealth and power to the .0001% at the expense of everything else.

But with the magic of propaganda, the position that is being sold to us is that our so-called leaders are working “as hard as they can” to put the policies in place that will protect our climate…as well as our economy.

The problem is that their actions don’t support that narrative, in fact, they contradict it. A more accurate description of their goal is to:

Protect capitalism, the source of their wealth and influence, with a secondary PR-infused appearance of trying to protect our fragile ecosystems.

Take Back the Power

Democracy may not be perfect but it makes a lot more sense than giving power to a group of psychopaths who are driven by a capitalist ideology that is toxic to life on this planet.

It’s time that we stopped lying to ourselves and our children. It’s time to stop tinkering around the edges.

The climate won’t be protected by CSR, courts, divesting, offsetting, promises of a circular economy, ESG, Impact investing or whatever tweaking you’re most enamored with. Only with systemic change, a new reward system and strict regulations can we wrestle power away from the dysfunctional elite.

Outliers Will Lead the Way

The echo chamber of the ruling class offers no meaningful ideas beyond the fantasy of win-win market solutions, so-called green consumption and incrementalism that doesn’t really change anything. For now, it seems like the Capitalists will continue to defend their ideology.

If mainstream thinking is a dead end then we need to look at what the outliers have to say – those that aren’t trapped in the cult of capitalism.

The problem is that those fringe thinkers are still way out in front of the policy makers who are still greatly affected by the propaganda that has filtered down from the ruling elite. It’s hard to escape it when everyone around you adheres to that narrative.

Ideally a majority of the .0001% would stand up and say something other than the usual drivel of how they’re working on a new carbon capturing technology or how you can buy this shiny new eclectic vehicle to make the world “greener”. We need them to talk about real solutions that include forcing corporations to pay for the harm that they put into the world, strict regulations, reducing consumption and a rapid decline in fossil fuel use. Failing that, I see two options going forward.

I want to BRAINSTORM for real change!

In case you missed these Brad Zarnett posts:
The Betrayal Behind Canada’s Climate Policy
Ethically Bankrupt Politicians Are Killing The Planet