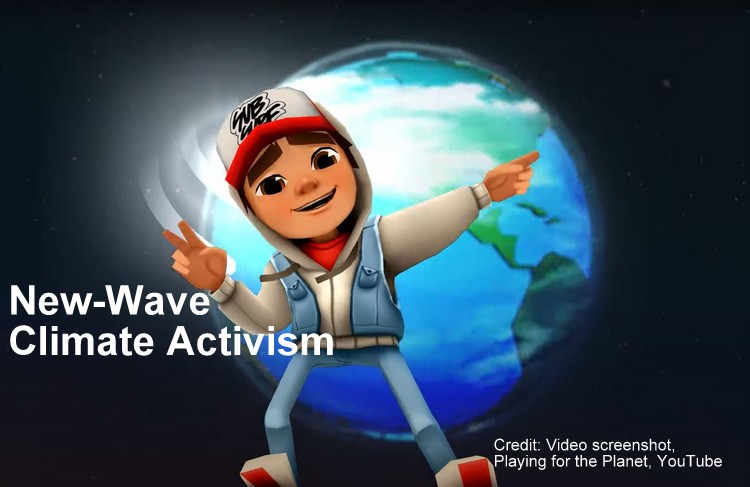 At lease one third of the people in the world are gamers. Could climate change video games—playing for the planet—have a big impact in how we adapt to a climate-constrained world? Are we about to witness a new-wave of climate activism?

(The following piece was previously published in the Climate Reality blog.)

Playing for the Planet

Times are changing and so is climate activism – video games could be the next big thing for inspiring action.

We all need a break from reality sometimes, right? Whether it’s curling up and disappearing into good book or binge watching every episode of “Bridgerton,” allowing our minds to escape from the often-harsh realities of our daily lives is a necessity.

For many individuals all over the world, there’s one method of digital escapism that’s been extremely popular throughout the years: video games.

Now we know you may be thinking- what do video games have to do with climate change? Hear us out.

The gaming industry has a tremendously wide reach, especially with younger generations. Just to note how massive the industry is, around the world, one-in-three people play video games.

With a reach like that, the gaming industry could become one of the biggest assets for climate organizations to inspire people and get them talking about the climate crisis.

The video game industry is not exactly an industry renowned for its sustainability and suffers – rightly or not – from more than a few negative associations.

In 2019, the industry saw an opportunity to rebrand and to do better and mean it.

It also knew it needed help. So that year, GRID-Arendal and Playmob formed an alliance with 30 Triple A companies and smaller gaming studios and joined forces with the United Nations Environment Programme (UNEP) to create the Playing for the Planet Alliance.

Playing For The Planet | The Gaming Industry Is Tackling Climate Change
September, 2019

Two years on, the Alliance is making headway towards its goals of making the industry more sustainable, inspiring action, and exploring new approaches to video game storytelling, among others.

For example, in 2021 60% of the Alliance members committed to become net zero or negative by 2030. At least 14 new organizations joined the alliance and more are interested in joining this year.

Within the Alliance, an initiative was formed known as the Green Game Jam, which aims “to highlight to hundreds of millions of players worldwide the critical role of forests and oceans in the fight against biodiversity loss and climate change.”

In 2021, the Green Game Jam saw tremendous success in inspiring individuals to start taking action, with the first-ever video game climate walk and other actions that led to real life change.

Both campaigns helped Green Game Jam attract a successful turnout for the year. And with the event leading to almost $800,000 in donations to charities, 266,000 trees planted and 60,000 pledges it’s easy to see how influential video games can be in translating action on the screen into action in real life.

So how did the games themselves feature climate actions? Let’s take a look.

It’s Not Game Over Just Yet

One of the most renowned games to ever emerge in the gaming industry is Pac-Man. Since 1980, the game has been seen throughout numerous arcades, in households, and in 23 different game versions.

So, what if we told you that playing Pac-Man could help raise awareness for climate issues?

In the 2021 Green Game Jam, Bandai Namco Entertainment America became a part of the initiative and created the in-game event known as “PAC-MAN For the Planet.” The in-game event consisted of a forest-themed adventure mode where participants could unlock a new award for the event completion.

Numerous other games took on the challenge, incorporating in-game events that advocated for forest restoration or coral reef conservation.

Although 2021, was a pivotal year for the gaming industry and sustainability, 2022 could go even further.

Each company that was a part of the alliance in 2021 set goals for what they would strive to do in 2022.  For example, Microsoft (Yep, Microsoft) has added new hardware and software features to monitor power use and increase energy efficiency in newer Xbox devices to help cut energy use and deliver on the company-wide goal of being carbon negative by 2030.

Not only are the companies adopting more sustainable practices within their business, they’re also encouraging their users to become climate advocates.

For example, this year Sony and Guerilla Games released the much-anticipated Horizon Forbidden West, a sequel to the wildly popular Horizon Zero Dawn. The main plot of the game is centered around the post- apocalyptic city of San Francisco in the year 3022.

The game highlights how humans and their lack of drive to protect the planet eventually led to their demise. However, Ben McCaw, the narrative director for the game says, “One of the things I love about both games is that they’re beautiful, but it’s not without sadness, and that’s the juxtaposition we really like.”

Yes, the game lives in a post-apocalyptic landscape in the future, but it also indirectly pushes its users to think about climate and just how much humans impact our environment right now.

Plus, Sony announced that for each user that unlocks an in-game trophy by March 25, 2022, it will plant a tree with the Arbor Day Foundation, with the goal of planting 288,000 trees.

Gamer-Turned-Advocates Are the Future of Climate Action

In 2021, there was over 2.9 billion people who engaged with video games. This year, that number is projected to surpass 3 billion. With numbers like this, video games could have a critical role in inspiring climate action at a critical time for the planet.

Whether in climate-centered games or even general audience games, increasingly smart game designs are asking more and more players to think about the climate and how it’s impacting their lives.

And at a time when climate change is becoming a regular fact of life for most of us, this shift reflects how a new generation sees the issue as interwoven into every aspect of their lives. It’s the start of a much more diverse climate movement, one with the numbers to win and truly save the world for all of us.

To join our global movement of digital activists, sign up for our email list and get the latest on climate developments worldwide and how you can make a difference.