In our obscurity, in all this vastness, there is no hint that help will come from elsewhere to save us from ourselves. It’s up to us. Carl Sagan

The Most Important Thing I Have Ever Done

The idea of a right to a healthy environment is getting traction at Canada’s highest political levels. Federal Opposition MP Linda Duncan recently introduced “An Act to Establish a Canadian Environmental Bill of Rights” in Parliament. If it’s passed, our federal government will have a legal duty to protect Canadians’ right to live in a healthy environment.

I’m travelling across Canada with the David Suzuki Foundation’s Blue Dot Tour to encourage people to work for recognition of such a right — locally, regionally and nationally. At the local level, the idea of recognizing citizens’ right to live in a healthy environment is already taking hold. Richmond and Vancouver, B.C., The Pas, Manitoba, and the Montreal borough of Rosemont-La Petite-Patrie all recently passed municipal declarations recognizing this basic right.

Our ultimate goal is to have the right to a healthy environment recognized in the Constitution’s Charter of Rights and Freedoms, and a federal environmental bill of rights is a logical precursor. The Charter of Rights and Freedoms itself was preceded by a federal statute, the Bill of Rights, enacted under Prime Minister John Diefenbaker’s Progressive Conservative government in 1960.

This isn’t a partisan issue. It appeals to people across the political spectrum and has broad support among Canadians. An earlier attempt to pass a Canadian environmental bill of rights (also led by Linda Duncan) gained the support of MPs from various parties before its passage through Parliament was interrupted by the 2011 federal election. In France, conservative leader Jacques Chirac championed the idea of environmental rights during his presidency. After more than 70,000 French citizens attended public hearings, the Charter for the Environment was enacted in 2005 with support from all political parties.

I’ve seen so many positive changes in our legal systems and social safety net in my 78 years — including adoption of the Charter of Rights and Freedoms in 1982. My family was incarcerated in the B.C. Interior during the Second World War, just for being of Japanese descent, even though we were born and raised in Canada. Like other people of colour, my parents didn’t have the right to vote until 1948. First Nations people on reserves couldn’t vote until 1960. And women weren’t even considered “persons” under Canadian law until 1918, when they were given voting rights. Homosexuality was a crime punishable by prison until 1969! I’m convinced that legal recognition for environmental rights will be the next big change.

Progress is possible when enough people recognize its necessity and come together to make it happen. Protecting our country and planet, our health and the future of our children and grandchildren is absolutely necessary. We can’t live and be well without clean air and water, nutritious food and the numerous services that diverse and vibrant natural environments provide.

Even in Canada, where our spectacular nature and abundant water are sources of pride, we can no longer take these necessities for granted. More than 1,000 drinking-water advisories are in effect in Canada at any time, many of them in First Nations communities. More than half of us live in areas where air quality reaches dangerous levels of toxicity. And from Grassy Narrows and Sarnia’s Chemical Valley in Ontario to Fort Chipewyan, Alberta, people are being poisoned because industrial interests and profits are prioritized over their right to live healthy lives.

It’s not about hindering industry; it’s about ensuring that companies operating in Canada, as well as our governments, maintain the highest standards and that human health and well-being are always the priority. Evidence shows strong environmental protection can benefit the economy by spurring innovation and competitiveness and reducing health-care costs. This is about giving all Canadians greater say in the democratic process and looking out for the long-term prosperity of Canada.

More than half the world’s nations already recognize environmental rights. It’s time for Canada to live up to its values and join this growing global movement.

There’s no date yet for a vote on Bill C-634, but its introduction has started a conversation among politicians in Ottawa. Let’s hope people from across the political spectrum will recognize the importance of ensuring that all Canadians have the right to a healthy environment.
______ 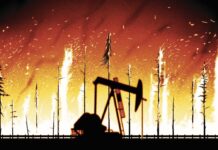