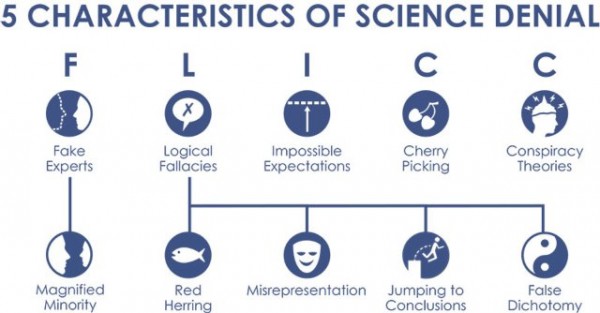 What is driving climate science denial and how do I respond to it? This question has prompted me to follow Denial101x – Making Sense of Climate Science Denial – an online course offered by the University of Queensland in Australia. This article includes portions of the course content from Week 1 of the Denial 101x MOOC (Massive Open Online Course).

Democracy depends on a well informed public. People have a right to be accurately informed. But if the public is being misinformed by people who deny climate science, that has social and environmental consequences. The issue of science denial is controversial and inspires a lot of emotions. That’s why it’s imperative that we take a scientific approach in our response to science denial. We need to draw upon the empirical research into understanding what drives science denial as well as the empirical research in how to respond to science denial ~ John Cook, course developer, instructor and Climate Communication Fellow at the Global Change Institute).

Denial is a process. What do we mean by denial?  Why do people reject scientific evidence? What are the drivers of denial? Psychologically, how does denial work? Are there any tell-tale characteristics of denial? And if so, what are they? And the all important final question – how do we respond to science denial?

Denial is not skepticism. Genuine scientific skepticism is a good thing. In fact, it’s the heart of the scientific method. Genuine skeptics don’t come to a conclusion until they’ve considered the evidence. In contrast, someone who denies well-established science comes to a conclusion first, and then discounts any evidence that conflicts with their beliefs. Denial and skepticism are polar opposites.

Scientists embrace skepticism. There’s a need to reclaim the word so that skepticism once again becomes associated with evidence-based critical thinking rather than the rejection of scientific evidence. Science denial results in confirmation bias – in receiving evidence in a biased way. It’s not necessarily an intentional thing. The trait of denial can come about from unconscious processes. Confirmation bias can cut both ways. Ignoring the full body of evidence can result in alarmist statements that aren’t consistent with all the data.

So what you really want to know is how to tell the difference between skepticism and denial.  Over the years, there have been many different occasions when groups of people denied a scientific consensus. For example, the link between smoking and cancer, that humans evolved from lower lifeforms and more recently, human-caused global warming. All those forms of denial focus on different areas of science.

A scientific paper by Pascal Diethelm and Martin McKee found that regardless of which science is being targeted, all denial shares five characteristics. Diethelm and McKee identify them as Fake Experts, Logical Fallacies, Impossible Expectations, Cherry Picking and Conspiracy Theories – FLICC.

Fake experts are used to create the impression of an ongoing scientific debate.  The general public relies on expert opinion as a guide for their own beliefs about science. For this reason, casting doubt on a scientific consensus is a key strategy for those looking to manufacture doubt about the science. Fake experts appear to be highly qualified but don’t have actual expertise in the relevant scientific field.

People tend to attribute more expertise to those who agree with their existing beliefs and values. People are then more likely to recall experts who they agree with. This results in a distorted perception of scientific consensus. The more you disagree with a consensus position, the lower you think that consensus is.

An alternative way to portray the impression of ongoing scientific debate is to magnify those few remaining scientists who continue to disagree with the consensus position – magnified minority. There are still a handful of apparently credentialed scientists who deny that HIV causes AIDS. While their views have lost respectability in the scientific community, they still continue to create doubt in the public’s mind.

Logical fallacies are logically false arguments that lead to an invalid conclusion. For example, a red herring is a logical fallacy that distracts people with an irrelevant piece of information. Someone might argue that carbon dioxide is a colourless, invisible gas so therefore it’s not a problem. But the fact that carbon dioxide is invisible is irrelevant to whether greenhouse gases affect climate. A number of logical fallacies fall under this umbrella. These include misrepresentation or over-simplifying the science. Making faulty leaps of logic is called jumping to conclusions. And presenting only two choices when other options are available is called a false dichotomy. These all appear in myths that cast doubt on climate science.

The third characteristic of science denial involves impossible expectations. This demands unrealistic standards of proof before acting on the science. This strategy was pioneered by the tobacco industry which highlighted any uncertainty in order to obscure the scientific consensus linking smoking and cancer. Whenever additional evidence linked smoking to cancer, tobacco advocates would raise the standard of proof and claim insufficient evidence.

Cherry picking focuses on specific pieces of data, often out of context, while excluding any data that conflicts with the desired conclusion. But how do you tell when someone is cherry picking? Cherry picking happens when a conclusion from a small piece of data is different from the conclusion supported by the full body of evidence.

Cherry picking  can also result from confirmation bias, putting more weight on agreeable information while downplaying disagreeable evidence. We remember the hits but tend to forget the misses. For example, in one study, people were told about a breakdown at a nuclear power plant. Pro-nuclear participants focused on the fact that the safeguards worked. In contrast, nuclear opponents focused on the fact that the breakdown happened at all. In the end, both groups strengthened their original belief.

When someone disagrees with an overwhelming scientific consensus, there is always the resort to conspiracy theories. How else would you explain that all the world’s experts, scientific organisations and journals agree on something that you disagree with? The only explanation must be that the experts are all conspiring to falsify or exaggerate the science. That’s why there were so many people who believed that AIDS was created by the U.S. government.

A number of studies have found that people who deny climate science are more likely to show conspiratorial thinking. For example, one study found that for people who denied climate change, the most common response to the mention of climate change was conspiracy theories or the belief that climate change was a hoax. About 20% of the people in America, and around 15% in the United Kingdom, to varying degrees agree with the proposition that climate change is a hoax. It might be easy to accuse someone of intentionally trying to deceive us when they present arguments that oppose the scientific consensus. But the science of science denial tells us that these same arguments can arise from unconscious psychological processes. To the outside eye, genuinely held but false beliefs, or misinformation, can be indistinguishable from intentional deception, or disinformation.

You are now more qualified to address the notion of climate science denialism. By understanding the techniques of denial, and the psychology underlying it, you’re better equipped to respond to expressions of science denial including climate skepticism.