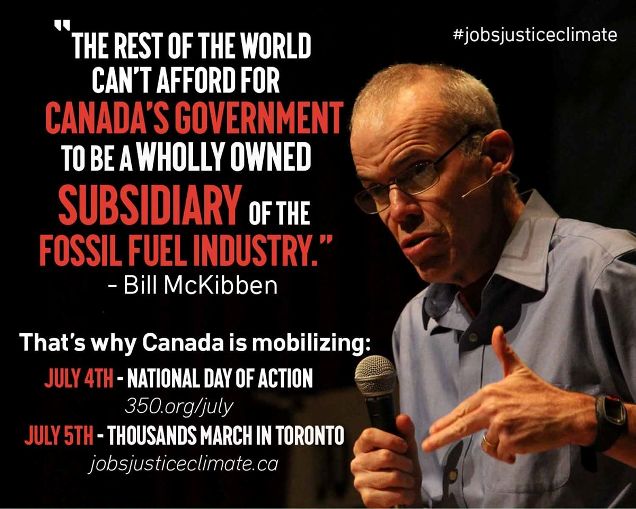 Message from Bill McKibben – A New Day is Dawning in Canada

This post is drawn from an email message from Bill McKibben to friends and people concerned about the survival of future generations. Canada has been a “huge obstacle in the global fight against climate change,” points out McKibben. Canadians need to join the rest of the world in the struggle for #JobsJusticeClimate. (RollyMontpellier ~ Editor, BoomerWarrior.Org).

It saddens me to see that for the last few years, Canada has been a huge obstacle in the global battle against climate change — it’s the country tearing up treaties and rejecting targets. This has been a shock for those of us living on the rest of the planet. We had gotten used to admiring Canada as a global leader dedicated to solving the planet’s problems.

The majority of people in Canada know that Ottawa’s infatuation with tar sands and other fossil fuels is damaging not just the planet but the country’s future. That’s why our friends across the country are mobilizing in an unprecedented way on July 4th and 5th to demand Jobs, Justice, and Climate Action.

On July 4th people will be out on the front lines, from the Atlantic to the Pacific, at all the places where we need to block the industry’s plans. A line will be drawn in the sand on the beaches of Vancouver, in Edmonton — near the heart of the tar sands — organizers will rally by the legislature, and a kayak flotilla will take shape in Hudson-Oka, Québec. Click here to find an event near you.

And then on July 5th, thousands will converge in Toronto for a great march designed to show our numbers and our resolve. As a federal election looms, mobilizing in large numbers is the only way to show leaders that they need to move beyond the politics of the past — and toward the promise of a future that works for everyone. I’ll be there, and I hope you will as well — click here to RSVP today for the March for Jobs, Justice and the Climate.

The rest of the world can’t afford for Canada’s government to be a wholly owned subsidiary of the fossil fuel industry. We need change and we need it fast. Clearly, politicians aren’t doing anything. The people will have to lead — and that’s exactly what’s going to happen in just a week.