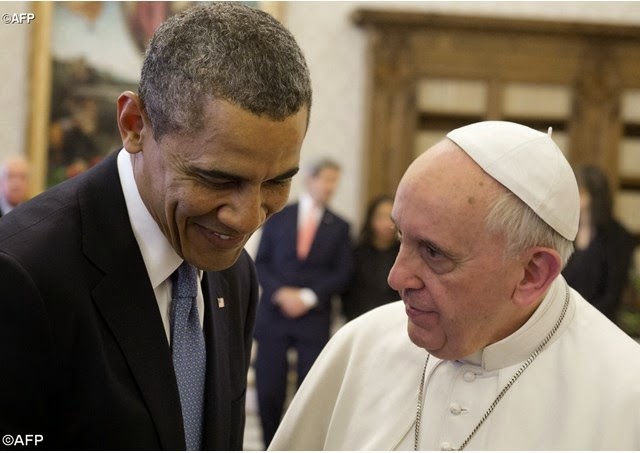 Pope Francis has arrived in the United States with the full impact of a diplomatic envoy. Francis is a strong climate advocate on behalf of the world’s Catholics plus billions of people in the developing world as well as all of us on the front lines of climate activism.

Pope Francis understands the urgency of climate change. Nothing short of a radical transformation in world climate leadership will steer humanity away from global warming armageddon. We may very well be at the point of no return.

While in the US, Pope Francis’ message will be clear reports Salon:

America has had a unique role in creating this problem, and is uniquely positioned to help fix it. Francis’ message to America, grounded in climate science, should be a riff on the Bible verse: “From everyone to whom much is given, much shall be required.”

The following text was originally posted by The Climate Mobilization:

As President Barack Obama witnessed the dramatic effects of climate chaos in Alaska [recently], a distinguished group of scientists and environmental, faith, civic and cultural leaders challenged him to champion a courageous U.S. goal of net zero greenhouse gas emissions by 2025 at the upcoming climate talks in Paris.

The challenge, issued in the form of an open letter, describes the current U.S. target of 26-28% emissions reductions by 2025 as a “weak” goal “that cannot be described as honest, courageous, or responsible in the face of a crisis that threatens the continued existence of humanity.” The letter also calls on the Obama administration to abandon its “all-of-the-above” energy policy.

The open letter references a 2011 letter sent to President Obama – and signed by some of the same leaders – that called for an 80% reduction in emissions by 2020: “Because that urgent call was not heeded, we have lost precious time in the race to save civilization and must now set our sights even higher.”

Urging an “all-hands-on-deck societal mobilization at wartime speed,” the letter states, “It is with a deepening sense of dread over the fate of humanity that we call on you today to use the powers of your presidency to champion a U.S. goal of net zero greenhouse gas emissions by 2025.”

The letter reflects the views of growing numbers of scientists and climate leaders who are advocating dramatic, near-term carbon cuts over the carbon gradualism that has dominated the policy discourse to date. They say the world community has squandered the time available for a leisurely transition, and that an emergency mobilization is now needed to stave off climate catastrophe.

In his groundbreaking 2015 report, Recount, signer David Spratt stated policymakers must recognize that “climate change is already dangerous, and we have no carbon budget left to divide up. Big tipping-point events irreversible on human time scales and large-scale positive feedbacks are already occurring at less than 1°C of warming.”

Signer Yeb Saño, former climate change commissioner of the Philippines, said, “Climate change presents a clear and present danger for us and is already profoundly affecting many vulnerable communities around the world. The only path to climate justice is for the US to embrace the zero emissions paradigm.”

“The Obama administration calls climate change a global threat on the scale of World War II, so why are they not responding with a World War II-scale emergency mobilization?” asked signer Margaret Klein Salamon, founder of The Climate Mobilization. “It is time to treat climate change like the existential threat it is and mobilize off of fossil fuels.”

“Seventy years later, it is hard to comprehend the astonishing achievement of America’s World War II mobilization, the sheer level of commitment, innovation and productivity that transformed society and led to the longest period of sustained economic growth in world history,” said signer Marshall Herskovitz, former president of the Producers Guild of America. “In the face of a crisis that now threatens our very existence, we can and must do it again.”

“If we don’t get to zero emissions within 10 years, we are looking at massive destruction and millions of lives lost,” said signer Laura Dawn, former MoveOn.org creative & cultural director. “Finally leaders are telling the truth about the severity of this crisis and the need for a heroic response.”

“After seven years of half-measures and half-truths, the Paris climate talks will finally
determine whether Obama’s legacy will be that of a climate champion who rose to the challenge of the climate crisis or a failure who was too scared to offer more than rhetoric and insufficient reforms,” said fossil fuel abolition activist Tim DeChristopher with the Climate Disobedience Center.