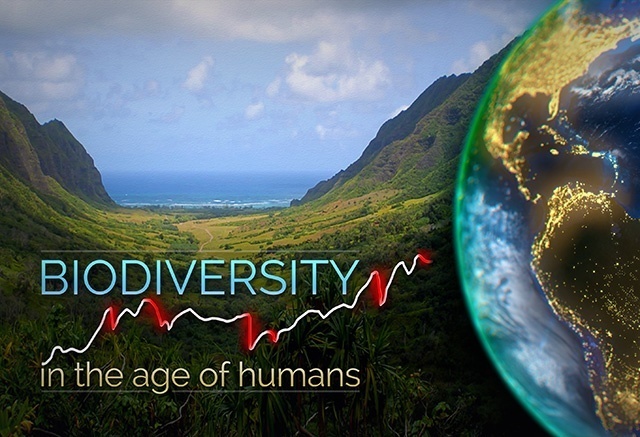 I’m pleased to welcome Bru Pearce as a contributor to BoomerWarrior. Bru is the co-founder of Envisionation, a climate change messaging and solutions website based in the UK. (Rolly Montpellier ~ Editor, BoomerWarrior).

There is a lot of concern about loss of biodiversity but very little is said about the loss of total biomass (the sum of all living things) which is another extremely dangerous anthropogenic impact on our planet, but one that may also point the way to a solution to our problems.

A huge amount of evidence exists to show that the overall biomass on land has been massively reduced over the past 3,000 years and increasingly evidence is coming to light in respect of the loss of biomass in the oceans. Loss of biomass on land may well be as great as 50%, loss of biomass in the seas could be as high as 80%. If this is correct one of the consequences of man’s actions over the past 3,000 years is that the overall annual living carbon cycle has been massively reduced by perhaps as much as 70% of what it would have been over the preceding 2 million years through around 20 ice age cycles, and the part of the paleo record that is relevant to evolved life, including us, on earth now.

I would argue that with a much greater carbon cycle the biosphere’s resilience was far greater than it is now, in respect of maintaining and/or recovering atmospheric balance through major shocks, be they geological, biological, asteroid strikes or as a result of the sudden emergence of an industrial society.

Because of this, referencing the past paleo record as a way of predicting future climate change cannot be entirely relied upon and we therefore need to recognise that there is a significant risk that climate change impacts will occur much faster and with greater intensity than presently anticipated by our paleo based modelling.  This reduced resilience is beginning to become apparent in the earth system sensitivity (the amount of global warming in relation to a doubling of atmospheric CO2e). So that even David Wasdell’s sensitivity figure of 7.8°C to doubling of atmospheric CO2 based on paleo records, may be exceeded due to our additional anthropogenic actions!

Evidence for the loss of biomass on land is all around us; consider the amount of land converted to agricultural use that was formerly forested and further consider that the soils associated with agricultural use that have been ploughed, contain far less organic carbon than mature forest soils. Into this equation one should also add the known areas of expanding deserts and growing urbanisation.

Evidence of the loss of biomass in the oceans is less obvious, researched or understood. What is clear though if one reads the reports of the early explorers, is that in the coastal environments around the world human action has led to a huge reduction in nearly all marine life, fish, kelp forests, reefs, mangroves, seagrass meadows, reed beds, shell fish and marine mammals. We have data that shows a near total collapse of the ocean fish stocks likely to occur by 2042 and most alarmingly records show that a reduction in ocean phytoplankton of 40 % has occurred over just the past 50 years and phytoplankton is responsible for half the planet’s oxygen production!

If we look back 350 years to a time when the world’s whale population had not been reduced by at least 97% and consider that then there would been a much more active nutrient cycle across most of the world oceans, then it follows that phytoplankton numbers would have been massively higher, providing vastly more available food for zooplankton and the tropic pyramid above them. Back then the entire oceans would have been teeming with life instead of having large areas as virtual lifeless desert.

Presently the total amount of carbon in living biomass is thought to be between 750 and 1,500 gigatons. I am speculating therefore that 3,000 years ago it was very much greater, at least twice the size – 1,500 to 3,000 gigatons – and possibly even more.

This suggests that with good husbandry of our planet through a Global Environmental Restoration program we should be able to grow and maintain in seasonal and hemispherical balance at least 750 gigatons of additional organic carbon.

Now our principal problems are:

To counter the warming, proposals are being put forward to preserve and expand Arctic sea ice, generate cloud shields, and ocean brightening, to reflect away solar radiation. Although these may be necessary to buy us a little more time, in the end the only real solution will be an overall reduction in greenhouse gases to a level a little below that of the 280 ppm experienced throughout most of the Holocene. This will require the removal of all of the 532 gigatons of CO2 because as atmospheric concentrations are reduced CO2 will off gas out of the ocean back to the atmosphere.

The lower CO2 ppm number is proposed because the excess ocean heat has to be radiated away, once this had occurred CO2 levels could then be allowed to rise again to ensure proper temperature balance of the biosphere and as necessary to correct against the natural trend to dip towards the next ice age.

Usually when we speak of atmospheric CO2 reduction we are considering permanent sequestration of atmospheric carbon and we look to the natural annual sink that takes place due to biological and geochemical activity as carbon transfers out of the living carbon cycle. It’s only in the case of reforestation that we really look to atmospheric carbon reduction due to increased biomass.

However where I see a real solution to our problems is in a return to a much greater amount of living carbon, drawing down say 325 gigatons of atmospheric carbon into increased biomass on land and in the oceans, which I believe could be done in a matter of 10 to 15 years by growing forests, restoring soils and most importantly fertilising the oceans in such a way that the correct amount of nutrients are permanently available long enough for the re-establishment of the original ocean ecosystems.

The big one-off atmospheric CO2 reduction comes from the growth in biomass in the active live carbon and that can happen relatively quickly.

Importantly the numbers show that there is opportunity for this over-correction which will allow us some hydrocarbon burning leeway, in order to make the transition and to maintain essential economic services. This is immensely important because as well as having added significant greenhouse gases, we also have atmospheric pollutants which shield us from solar radiation and if we fail to maintain these before atmospheric carbon levels are rebalanced, then we risk almost immediate temperature spikes particularly overland which could have devastating impacts on global food production. The economic collapse which would come about if we stop flying and reduced our hydrocarbon energy generation too fast, must be avoided at all costs, as it would immediately kick off a series of extremely severe positive feedbacks. Just consider the impact of millions of starving people in bankrupt economies, cutting down every last tree for fuel and eating anything left alive.

So we need a plan to commence biomass regrowth across the globe immediately and for a graduated reduction in hydrocarbon burning until we reach a sustainable level. In practice this means a rapid implementation of all renewable energy types and a complete retooling of our energy infrastructure. Hydrocarbon use needs to be prioritised so that it is only used were it cannot yet easily be replaced by non-hydrocarbon energy systems.

Climate change is everybody’s problem, all 7.3 billion of us, I argue that if we all get engaged either physically or by paying for it, in growing biomass, then the Earth has already provided us with a mechanism that has the power and capacity to solve the problem. This is not a geoengineering proposal; it’s a call for a Global Environmental Restoration Project and intelligent management of our only home.