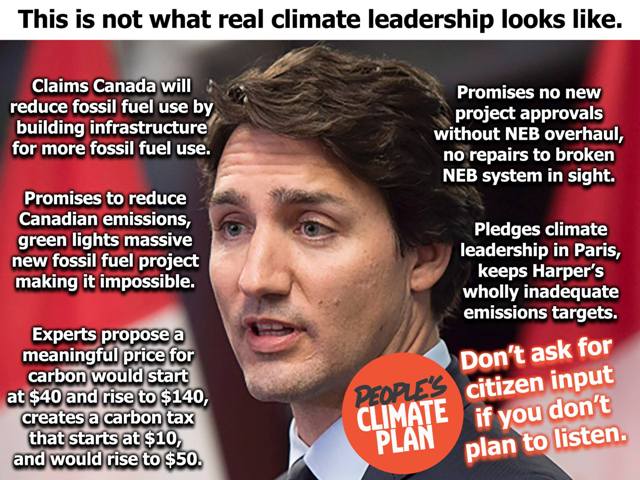 I can understand the new Prime Minister’s exuberance in Paris. Fresh off a convincing election victory, everything seemed possible. Canadians were thrilled to welcome in a new era of hope. And with him shining on the international celebrity stage, the emboldened and confident Trudeau was very convincing.

After a decade of dreadful performances at international climate events by the Harper government, I and millions of other Canadians naively jumped on the Trudeau climate action bandwagon. We drank the Trudeau koolaid. Finally there would be action on the climate.

And it was a great start. During the Paris talks, Minister of the Environment and Climate Change Catherine McKenna took the lead and worked tirelessly to push for the aspirational goal of 1.5°C of warming rather than the previously accepted norm of 2°C. Canada was indeed back in a leadership role.

Sadly, the euphoria generated by Trudeau’s words in Paris dissipated very quickly once the Canadian delegation returned home. I’ve written previously about Canada’s two climate faces — the international one and the domestic one.

But Canada is Only Half Back

Canada is Only Half Back. Federal Ministers Carr and McKenna speaking after the approval of the Pacific NorthWest LNG project, September 27. (Darryl Dyck/The Canadian Press)

Nothing says Canada is only half back more than the this photo showing federal and provincial officials announcing the approval of the largest natural gas project ever undertaken in Canada.

Admittedly there has been some lightweight progress on tackling climate change since Paris. But each “accomplishment” is lacking in seriousness and comes nowhere close to addressing the widening gap between what is happening and what needs to happen. The following are examples of climate half-measures and sellouts.

A First Ministers Meeting held in April resulted in the Vancouver Declaration. Much has been said about this event but it’s not much more than a plan to come up with a climate plan.

The six-point document contains no renewable energy targets, sector specific regulations on GHG emissions, or any mention of Canada’s number one contributor to climate change: the oil and gas sector. The sole national target mentioned in the document is a commitment to meet or exceed Canada’s 2030 target of 30 per cent cuts in emissions levels compared to 2005 levels — a target established under the previous federal government that has been criticized as weak. (Source: Derek Leahy~DeSmog Canada).

Canadians were asked for their ideas on how to address climate change during a summer of consultation meetings and an online conversation on the Let’s Talk Climate Action portal. The Federal government promised to use the results of the climate consultation process in shaping climate policy.

More than 4,000 people submitted some 3,000 ideas and over 10,000 comments. I attended four climate consultations and submitted my carbon pricing guidelines and five climate pillars on the website. However an analysis by 350 Ottawa shows that the data collected has significant flaws.

This government is not listening to Canadians. It’s becoming increasingly clear that the consultation process was entirely symbolic and just meant to buy time. The Liberals are proceeding with their own climate agenda that will include fossil fuel development and weak carbon reduction targets.

In spite of a repeated call to freeze the expansion of the Tar Sands, end fossil fuel subsidies and reject new fossil fuel infrastructure projects, the Prime Minister continues to argue that building more pipelines to get more Tar Sands oil to tidewater is necessary to fund our transition to a clean energy platform and a green future.

At a recent Canadian Climate Forum (which I attended), both Ministers Jim Carr and Catherine McKenna had the audacity and arrogance to tell an audience of clean energy advocates, environmentalists, economists, NGOs and climate scientists about their pro-fossil fuel climate strategy.

People say, ’Leave the oil in the ground,’ they don’t want any development…Our view is we use the wealth of the old economy to finance the new energy economy. (Jim Carr, Minister of Natural Resources).

I’m as much an economic minister as I am an environment minister…I’m going to lose some people along the way. (Catherine McKenna, Minister of the Environment and Climate Change).

These revealing comments by Carr and McKenna come a month after the Liberals’ approval of the Pacific North West LNG project — a massive liquefied natural gas development which includes an export terminal and pipeline expansion.

“Based on the LNG decision, equilibrium between Canada’s contribution to the mitigation of climate change and its energy ambitions remains as elusive as ever,” wrote Chantal Hebert in a Toronto Star article.

Canada will be applauded at the COP22 talks starting in Marrakech on November 7 for its new national carbon pricing plan. The plan sets a floor price of $10 per tonne in 2015 rising by $10 per year to $50 in 2022. But let’s look at the facts.

Even with the new carbon pricing policy, emissions will still be trending upwards by 2022. “It is certainly not enough to do our fair share to avert climate disaster,” says Cathy Orlando, National Director of Citizens’ Climate Lobby (CCL) in Canada.

The strategy represents the lowest carbon common-denominator achievable considering Canada’s dysfunctional relationship between provinces and the federal government. BC’s support of national carbon pricing was only possible if Trudeau approved the LNG project. Alberta’s support is conditional upon the approval of pipelines to get its oil to foreign markets. Premier Wall of Saskatchewan is considering court action to block the plan. And Premier MacNeil of Nova Scotia promises to open a new coal mine.

Several provinces have launched their climate action plan in the last year. But these are less about the environment and reducing carbon emissions than they are about economic development including fossil fuel projects. It’s a masquerade — smokescreen and mirrors. Two examples follow:

British Columbia Climate Plan: Includes a frozen carbon tax, more subsidies and weak emissions reduction targets that are lower than previous commitments. Premier Clarke prefers instead to balance the environment with the economy. The plan is simply a cop-out.

So what awaits Canada at the Marrakech COP22 climate talks? How will it spin such puzzling half-measures into a positive message? Can Catherine McKenna convince the international climate community that the environment and the economy go together? Can she hide the fact that Canada’s climate policy is steeped in oil?