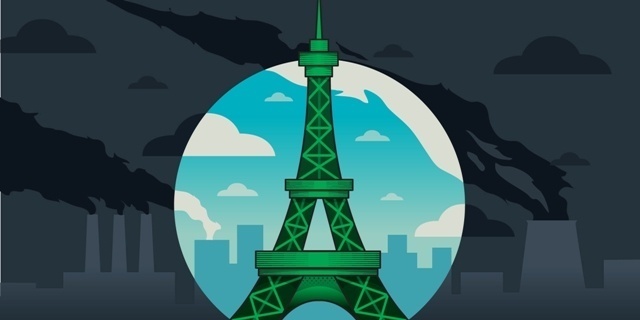 This post is sourced from The Tree which is a service provided for climate communicators and influencers involved in public discourse on climate change, global warming and the transition to a clean energy platform. Title of post – The Paris Agreement is Now Official. Now What? (Rolly Montpellier~Editor for BoomerWarrior).

The Paris Agreement negotiated by 197 countries in France last year is now official with the full force of international law, well ahead of all expectations. This treaty’s “entry into force” (on November 4) will shape the way that governments, cities, investors and businesses tackle global warming over the decades to come.

And as the last year has shown it is already speeding the transition away from fossil fuels towards clean, sustainable energy systems. And the sooner the better for a world that has again notched up another hottest year record. Increasingly, vast populations are now suffering from air pollution, the world’s greatest environmental health risk, along with more frequent extreme weather events.

The challenge for Governments now is to use this collective momentum to cement needed actions, and a golden opportunity awaits at the UN climate negotiations set to kick off  in Marrakech.

For the first time, the world will meet to start writing the rulebook that will guide the international community to a future safe from threatening climate change. The Paris Agreement outlines a regular, clear and mandatory process for countries to incrementally increase and strengthen their climate actions every five years. COP22 must outline clear expectations on how countries will increase ambition by 2020.

Countries must submit their long-term strategies which will be tied to sustainable development goals and national planning. These plans are crucial to unlock new investment opportunities and redirect finance into climate-friendly initiatives.

The issue of finance remains sticky. While a roadmap to 100 billion has been delivered ahead of the negotiations – another sign of political momentum – there are still some significant gaps. Rich countries can help bridge some of these in Marrakech by committing to double climate finance to help communities adapt to the ongoing impacts of global warming.

Loss and damage also remains a key issue, reaffirming the need for a 1.5°C goal and addressing the needs of the most vulnerable. The impacts of climate change are being felt by the poorest communities, in particular small island nations and other tropical coastal countries, whose very existence is under threat. Decisive action and explicit commitments on ratcheting up ambition are needed now in order to limit warming to 1.5°C.

Human health is also once again a key issue around the negotiations, with landmark reports out this week showing air pollution is responsible for the deaths of 600,000 children under the age of five annually. Furthermore, 300 million children around the world are living in areas subject to extreme levels of toxic fumes. This puts all Governments on notice that dangerous emissions from dirty energy sources such as coal-fired power stations cannot continue unabated.

Accelerating the transition away from fossil fuels is the only way to prevent a global children’s health crisis and ‘an avoidable human tragedy’.

The World Health Organisation and UNICEF have now thrown their weight behind the renewable energy transition which could save 100,000 lives a year in China, create 470,000 clean jobs in the US and save the EU $33billion a year in dirty energy imports.

The Paris Agreement — entering into force in time for next week’s UN climate conference —  is political recognition of a change that is already well underway. The clean energy transition is not just well underway, it’s unstoppable and accelerating. Legally locking-in the Paris Agreement with almost unprecedented speed is yet another strong signal to business and investors that have moved into clean, sustainable models that they did the right thing.

In the last 18 months alone the global rate of decarbonisation has doubled. Now even oil majors are seeking to back renewable energy in a cynical or possibly desperate roll of the dice as they know they are trapped on the wrong side of history.

Despite 2016 notching up another hottest year record, current plans on the table for COP22 will see the world warm by more than 3°C. Although 87 countries, responsible for more than 63 per cent of greenhouse gas emissions, have signed on to the Paris Agreement, far more needs to be done to reduce the influence of fossil fuel companies and speed up decarbonisation efforts.

Boosting national climate actions and filling gaps in the finance deal that rich countries have put on the table to support the poorest are key points for negotiators at COP22 in Morocco. Countries have to build on the platform of the Paris Agreement and a good way to start would be to kick polluters, like the World Coal Association, out of the UN climate negotiations for good.

Governments have completed the paperwork, now the real work begins. The only way to meet the 1.5°C or even just the 2°C target under the Paris agreement is to keep fossil fuels in the ground. The Paris agreement means that we cannot have any new coal, oil or gas projects. In fact, we need to start phasing out existing fossil fuel operations across Europe now. – Nicolò Wojewoda, 350.org