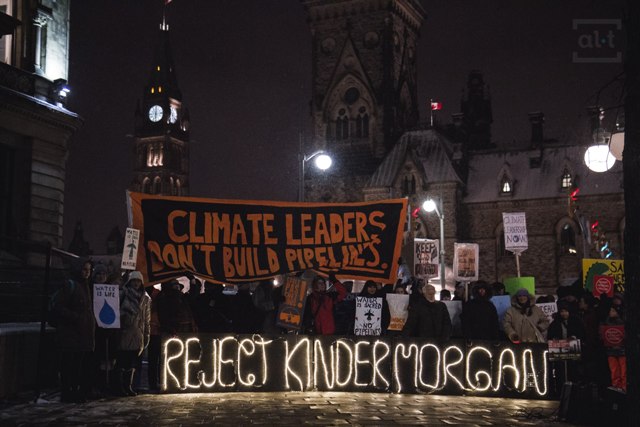 During the last week, thousands of Canadians attended more than 50 vigils organized by 350.Org (Canada) and local community organizers to protest against the approval of the Kinder Morgan pipeline. Daniel Caley-Daoust of Council of Canadians was the coordinator and local organizer for the Ottawa event.

I attended the Ottawa vigil where I spoke on behalf of 350Ottawa.org. This post is a summary of my talk and the words of other speakers at the event.

Andrea Harden, also of the Council of Canadians, told the crowd that Kinder Morgan is the litmus test of the Trudeau climate leadership. The possible approval of Kinder Morgan is becoming more of a national issue and a test about Trudeau’s climate promises, environmental rights and Indigenous rights.

Kinder Morgan is The Litmus Test

The Kinder Morgan Trans Mountain proposed expansion is a $6.8 billion project that would increase capacity from the current 300,000 barrels per day to 890,000 barrels daily. It would also increase risky tanker traffic from the Westbridge Terminal from 5 to 34 per month.

But we don’t need more pipelines to get existing oil products to market. In a world envisioning decarbonization by 2050, the current system is adequate. As we transition to a clean energy platform, we will decrease production gradually until fossil fuels become an energy source of the past.

A recent report, (The Sky’s Limit) by Oil Change International (OCI), shows clearly that there is no remaining atmospheric space for any new fossil fuel projects. “These pipelines wouldn’t be needed unless there’s a massive expansion of tar sands that is allowed to continue right up to 2030….Once the pipelines are built, there’s a huge incentive to continue filling them and allowing that expansion…We can’t continue expanding oil production in the midst of a climate crisis,” says OCI‘s Adam Scott.

Even today’s fossil fuel operations will push the atmosphere beyond the 1.5°C long-term target of warming adopted at the Paris climate summit. In fact, some current operations will need to close down, and not expand as the Liberals want to do.

Graham Saul of Ecology Ottawa spoke at the vigil. He exposed the climate cognitive dissonance of the Trudeau government to the cheers of the enthusiastic crowd of protesters. Cognitive dissonance is a condition resulting from holding two conflicting beliefs, ideas or values at the same time. The Liberals’ behaviour on climate is the classic textbook case of cognitive dissonance.

The Trudeau government has just released its Long Term Climate Strategy which calls for a 80 percent carbon cut by 2050. We have a long way to go — from 732 million tonnes of emissions to 150 million tonnes during the next 35 years. The strategy identifies targets in many sectors such as housing and transportation but fails to include the managed phasing out of fossil fuel production or a ban on pipelines.

In Marrakech, Canada was accused of touting climate ambition and boasting about its success at home and its Paris commitments after just approving LNG projects in spite of strong opposition from Canadians and local First Nations.

Canada’s climate actions are not lining up with its climate promises. The actions and the rhetoric are diametrically opposed and contradictory. It’s simply not possible to reduce emissions by approving fossil fuel infrastructure that increases emissions.

The following excerpt from iPolitics sums up the Canadian climate dissonance in a nutshell:

We like the idea of taking action against climate change, we support other countries in their efforts, we’d like to meet our obligations. We also really want to sell the world more fossil fuels. This means we put forward climate initiatives that produce great headlines while delivering little in the way of actual GHG reductions — then approve large projects that increase our emissions.

My Message to Prime Minister Trudeau

Mr. Trudeau, your government was given a strong climate mandate in October of 2015. You campaigned on the need for climate leadership in Canada.

And after promising to become an international climate leader during the Paris Agreement talks in December 2015, you are rapidly losing credibility as a climate leader. Canadians are starting to realize that your climate action strategy is hypocritical, dishonest and politically cheap. Empty rhetoric is no substitute for “real” climate action.

Real leadership is demonstrated by doing what is right and making hard choices. But you are taking the easy way out by copping out to the fossil fuel sector. And by doing so it will be impossible to decarbonize and reach our Paris emissions goals.

In British Columbia, you approved the LNG project to get Christy Clark’s support for the national carbon pricing plan. In Alberta, Rachel Notley needs a pipeline before she will support you. And now Premier MacNeil in Nova Scotia is being given an extension past the 2030 phasing out of coal plants to bring him onside.

To continue expanding oil production in the midst of a climate crisis is the wrong path. The right path is to listen to the climate science, to heed warning signs, to stand with Canadians and over 85 First Nations.

Mr. Trudeau, you want to sell the world more fossil fuels by building more pipelines and you want to be a global climate leader. You can’t do both. The world is watching you. Now Canadians are watching too and 2019 is just around the corner.

Mr. Trudeau, you must decide what is more important – the future of our children and our grandchildren or the future of the fossil fuel sector. You must say NO TO PIPELINES.

The world needs a new climate leader. Why Not You?