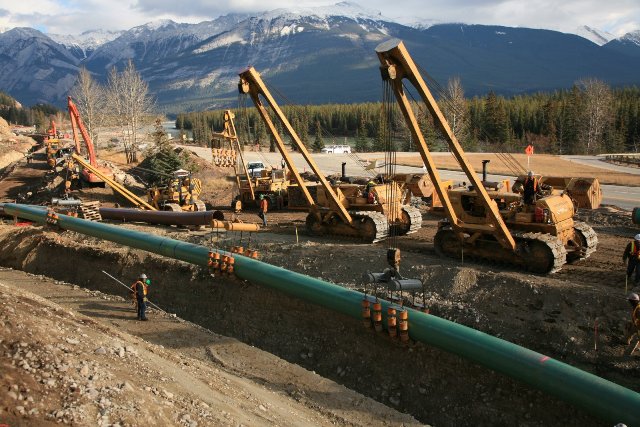 Canada can’t approve Kinder Morgan’s controversial Trans Mountain pipeline and still convince the international community that it plans to keep its promises on climate change, a fiery panel of Canadian and international speakers told a news conference in Marrakech.

The panel called on Canada to suspend all new fossil fuel development projects, and meet its fair share obligations to an international climate finance regime that has been one of the major sticking points in negotiations during COP 22 in Marrakech.

“Canada’s actions recently have not lined up with its promises to address climate change, especially with regard to the rights of Indigenous peoples,” said session moderator Maya Menezes of the Canadian Youth Delegation. “We’re touting our huge success and commitments to the Paris Agreement,” but the country recently approved two new liquefied natural gas (LNG) projects over strong opposition from local First Nations.

“Numerous sources have also confirmed that Canada is moving to approve the Kinder Morgan pipeline in about two weeks,” Menezes added. “This is in direct opposition to all their rhetoric here at COP, and in Paris, as well.” She said the international community “has noticed that Canada and other rich countries continue to act, thinking they can carry on with business as usual while the most vulnerable countries struggle for survival in a warming world.”

Lidy Nacpil of The Philippines, speaking for the Global Campaign to Demand Climate Justice, said her country is one of the most vulnerable to climate change, and has been facing extreme weather for many years. “For us, 1.5°C is a question of survival,” she said. “Our people are already being displaced in the millions, we have already lost thousands of lives to climate-related disasters, and we are very gravely concerned about rich countries like Canada doing their fair share” to keep carbon out of the atmosphere.

“This fair share is not just living within their carbon budget,” she stressed. “Their fair share also includes delivering on the finance that is needed so that developing countries like The Philippines will not only do our own fair share, but do more.”

Nacpil pointed to the “historical tragedy that the rich countries of the world have emitted so much in the last 100 years that even the utmost of domestic action is not enough to keep temperature rise below 1.5°.” That means international climate finance “is not something to help developing countries. It is something the whole world needs. The biggest mitigation potential is in developing countries, and that must be delivered to save the entire planet.”

Benson Ireri of Christian Aid Africa noted that Africa “is one of the continents suffering most from the impacts of climate change,” with people continually displaced by drought and other climate effects. “For us, it’s a serious concern when we see the international community not honouring their commitments to cut emissions,” despite countries’ “moral obligation to honour the Paris Agreement.”

Ireri pointed to Canada as a developed country that is “still pursuing its fossil fuel-based sector,” raising serious questions about “whether they are walking the talk” on the goal of capping fossil fuel investment. “They have to keep their pledges to divest from fossil fuels and, most importantly, invest in the renewable energy sector and provide the much-required financial support to help developing countries cope with the impacts of climate change.”

Kevin Hart, Manitoba Regional Chief with the Assembly of First Nations and co-chair of the AFN’s climate and environment committee, stressed First Nations’ duty and determination to protect water as the “vital, sacred source of life.”

From that starting point, “I’ve told our ministers in Canada, Minister Jim Carr and Minister Catherine McKenna, that as one of the leaders of the AFN I simply cannot approve or support any current or future pipeline development in Canada,” he said. “Indigenous peoples in this world contribute the least to climate change, and yet you can see full well that we see the full effects of climate change in our communities”—from changing weather patterns, to a shorter season for northern ice roads that reduces access and increases the cost of food and other essential supplies coming into remote First Nations communities.

Hart traced the fight against the Dakota Access Pipeline in the United States back to the fundamental need to protect water as a sacred life source. “It’s not just a Native American problem or a First Nations problem. It’s a human problem, and you can see that people of all colours and creeds are there at that camp.” The pipeline route crosses the Missouri River, and Hart said 1.6 million people would be affected by a spill or an explosion.

“Canada has come to these negotiations and been relatively constructive, open, and positive, and they have made very strong commitments to the international process by signing and ratifying the Paris Agreement,” he said. “But “there’s a very big disconnect, and it’s being noticed in the international community and at forums like this one in Marrakech.”

Scott pointed back to Oil Change’s recent analysis, The Sky’s Limit, which showed no remaining atmospheric space for any new fossil fuel projects.

“If you think about pipeline projects in Canada, they’re really all about facilitating massive growth in Canada’s fossil fuel industry, and tar sands in particular,” he said. The 40 to 50 year lifespans of the projects raise concerns about cumulative emissions, meaning that “we’re going to blow past our goals and it’s going to make decarbonization impossible. We have to say no today to make our goals achievable.”