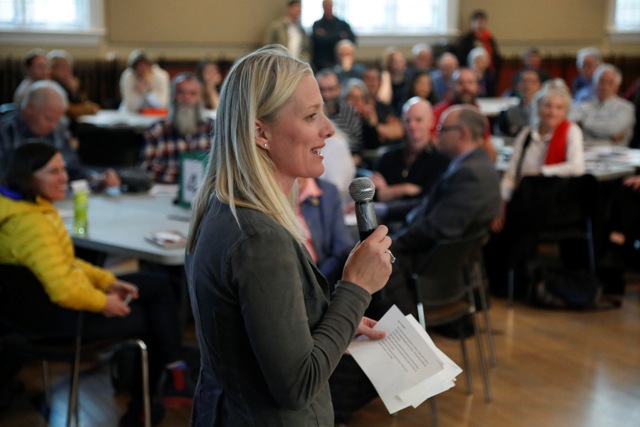 I’m pleased to welcome Monica Woodley, an ordinary citizen (like millions of us), who has been inspired by her grandchildren to become a climate warrior. I spoke with Monica on the phone recently. We agreed that our current government under the leadership of Justin Trudeau has made a mockery of the democratic practice of consultation, reducing it to a level of artful deception — an illusion, a work of fiction.

Climate change is one of the greatest challenges of our time. I was inspired and encouraged by the level of engagement I saw at my town hall. The ideas I heard last night showed clearly that Canadians want to be part of the solution. I encourage Canadians from coast to coast to coast to hold town halls in their communities and provide the feedback they hear to the government over the spring and summer. (Source: Catherine McKenna about her climate consultation meeting).

Like me, many Canadians support bolder action to address the threats of climate change. I want our federal and provincial governments to listen thoughtfully and respectfully to my concerns about climate change and take action to reduce its risks. As a grandmother, I understand that my grandchildren’s futures depend on it.

But ordinary citizens struggle to be heard over industry lobbyists defending fossil fuel subsidies and calling for new pipelines. Our voices must be part of the government’s decision-making on a national climate plan. That is why I and many other Canadians were pleased to hear last Spring that the government would hold a country-wide public engagement on climate change.

My story goes back to May 24, 2016. That day, I excitedly joined two colleagues to attend a York Region town hall on climate change with our Member of Parliament, Majid Jowhari. I had learned about the event online and wrote to my MP. As we entered the large hall, I was surprised to see the number of people already seated at a dozen large tables. There were more than 200 of us, plus five presiding MPs and their staff.

There was a sense of urgency and excitement. We knew we were talking about one of the most important challenges our communities face. Many youths were in attendance, and one man at my table brought his nine-year-old daughter.

Participants at each table were given a question to discuss and to report back to the room. People showed up understanding the problem and wanted to get to work.

During our discussion, I heard comments like “Why are we doing this?”and “They already know the problems and the possible solutions to meet our climate targets and goals.” Someone added, “Why don’t they just do it! I am getting tired of the talking.” Someone countered, “Come on guys, this is our chance to be heard and to push the new government to serious action.”

Our table focused on ideas to reduce emissions, such as stopping new pipelines and leaving some fossil fuels in the ground. We talked about promoting renewable energy and retraining oil workers to work in cleaner industries. There were suggestions about public education, transportation, and support for First Nations communities. Others offered creative fiscal and economic solutions for growing our economy while reducing emissions, with support for putting a price on carbon and providing rebates for electric vehicles.

People at other tables discussed the impacts of climate change on our communities. They shared personal stories and concerns about the impact of extreme weather on health. I worry about how shorter winters and more intense heat waves will affect cultural and recreational activities my family enjoys. Some young people wondered about bringing children into a world so negatively affected by climate issues.

Yet when the town hall concluded, I still left feeling very hopeful. I was eager to receive feedback about our work that day and assumed we would see a strong national climate plan. But so far I have received no information about what took place and found nothing official online about our town hall. This is bizarre considering the town hall was held by five local MPs and the lead organizer was Deb Schulte, MP for King-Vaughan. In addition to Schulte and my MP, Jowhari, there were three other MPs present from our region — Leona Alleslev, Kyle Peterson, and Francesco Sorbara.

Given the Liberal party’s insistence on transparency and meaningful consultation with Canadians, it is surprising to find no notes from this meeting were submitted to the central online portal, nor were they distributed to participants.

I understand the magnitude of the challenge we face in combating climate change. Since the town hall, the federal government announced carbon pricing plans and decided to phase out coal power faster. These decisions are encouraging to me. On the other hand, we’ve seen major new fossil fuel projects approved and public subsidies to polluting industries continue.

Needless to say, this sends a conflicting message to me and the others who believe this government is serious about taking climate action. I firmly believe, as did many others at our town hall, that government subsidies to the oil industry must end and that no new pipelines should be approved.

Is Anybody Really Listening?

Was anybody in government really listening? What was the purpose of these town halls?

Because government didn’t let us know what was done with our contributions, I was glad to see a new report by Leadnow and The Climate Reality Project Canada that summarized what took place at town halls across the country. I was surprised and disappointed to learn that even the researchers who compiled these findings could not find notes or minutes from the large consultation I attended with several MPs. It makes me wonder where my ideas went. Was this an exercise in futility, or will our input actually be considered by government?

I remain hopeful that my thoughts will be reflected in a national climate plan that many Canadians – especially us grandparents – anxiously await.

This article was first published in the National Observer.