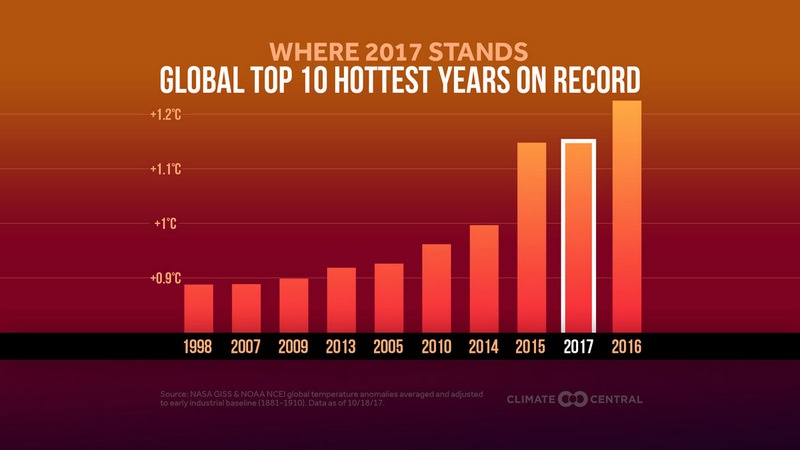 As COP23 (Conference of the Parties) begins its two weeks of meetings in Bonn, key indicators of climate change continue unabated. Two years after the landmark Paris Agreement, the world’s nations are now focusing on working out the technical details of  the accord which is the key to keeping global warming well below 2 degrees Celsius. Whereas the Paris Agreement laid out the groundwork, COP23 will flesh out the rule book world nations will have to follow.

The Bonn climate talks begin with a backdrop of bad news on the warming of the planet.

A UN report just released ahead of the Bonn talks paints a grim picture about the likelihood of success of the Paris Agreement. “Current national pledges will only get us one-third of the way to our 2030 target while efforts elsewhere aren’t making up the difference,” says Don Woynillowicz of the Clean Energy Review. “Momentum is clearly faltering,” said Edgar E. Gutierrez-Espeleta, Costa Rica’s environment and energy minister and president of the 2017 UN Environment Assembly. “We face a stark choice: up our ambition, or suffer the consequences.”

The window is closing

Scientific American reports that the window is closing to avoid dangerous global warming. There’s a 50 percent chance that the earth’s temperatures will reach 4°C by 2100 unless nations get serious about reaching carbon neutrality by 2050. Current climate actions under the Paris Accord will not get us there.

Experts (Christiana Figueres and colleagues) have declared that the world has but three years to make significant reductions in greenhouse gas emissions to safeguard our climate. The group has set out a six-point plan to do so as reported in Nature.

The Energy Mix (EM) reports that Canada’s emissions reduction strategy appears to be stalling out. Quoting Angel Gurria, (secretary-general of the Organization for Economic Co-operation and Development) the EM article points out that ‘with emissions down 2% from 2005 levels, when they should have fallen 17% by now to keep pace with the country’s international carbon commitments,” makes it highly improbable that Canada can reach its 2030 Paris Accord targets. Climate Action Tracker (CAT) rates Canada as “highly insufficient” in its efforts to do its fair share towards the success of the Paris Agreement — based on INDCs, 2020 pledges, long term targets, current policies. 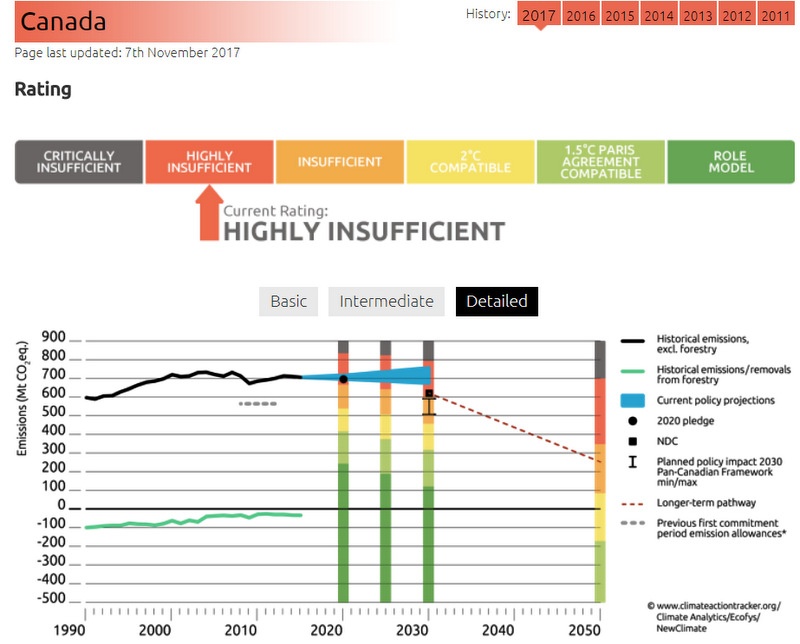 Commitments with this rating fall outside the fair share range and are not at all consistent with holding warming to below 2°C. If all government targets were in this range, warming would exceed 4°C – Carbon Action Tracker rating

And then there’s Trump

And then there’s the elephant in the room — the US withdrawal from the Paris Agreement — which will slow down talks and perhaps even sidetrack discussions to secondary issues such as the benefits of coal-fired power, which the US delegation is expected to focus on. And this strange positioning by the US team is completely contradictory to the findings of the The Fourth National Climate Assessment Report which strongly links US climate to global warming caused by human activities.

Back to COP23 – The Three Big Climate Change Topics

1. International Standards: Nations must first agree to set standards on how to measure carbon emissions and how to compare each nation’s contribution to the overall goal of keeping warming below 2°C — the global stockade. Tracking carbon achievements is a priority leading in to 2020 when nations have to start measuring collective progress toward achieving Paris Agreement goals.

2. Ratchet Mechanism: The ratcheting up mechanism is meant to steadily increase carbon reduction targets over time to ensure that the world reaches zero emissions that will keep temperature rise to below 2°C. Carbon Brief displays a well-laid-out timeline on “how countries plan to raise the ambition of their climate pledges” starting as early as 2020.

3. Money: Vast amounts of money are required to facilitate the transition of fossil-fuel-based economies to a clean energy platform. This transition will only become a reality if wealthier nations help poorer nations. The Paris Accord calls for over $100 billion annually distributed to developing countries by 2020.

Up to 25,000 people are attending the Bonn talks — diplomats, world leaders, activists, lobbyists, environmentalists, business leaders, scientists. This small army of participants has its work cut out for them. So much remains to be done to make the Paris Agreement a success. Patricia Espinosa, UN Climate Change Executive Secretary, sums it up quite well when she calls on the world’s nations to “go further and faster together”.

The thermometer of risk is rising; the pulse of the planet is racing; people are hurting; the window of opportunity is closing and we must go Further and Faster Together to lift ambition and action to the next defining level.