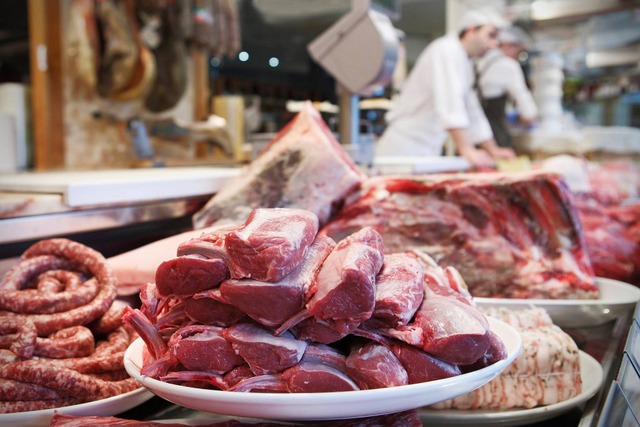 Emissions from livestock account for 14.5% of human-caused GHGs (greenhouse gases) according to a UN Food and Agriculture Organisation (FAO) study – total of 7.1 gigatonnes per year. Animal agriculture is driving global warming and deforestation around the world. It is the premise of this post that meat taxes will become part of the mix in tackling climate change, the greatest challenge of our time.

In the US, a recent report by Mighty Earth shows that toxins from manure and fertilizers end up in waterways – streams, rivers, oceans – causing marine life to die and the contamination of drinking water. Animal agriculture is being blamed for the largest-ever dead zone in the Gulf of Mexico. According to campaign director Lucia von Reusner at Mighty, “a reduction in meat consumption is absolutely necessary to reduce the environmental burden.” As the world’s appetite for meat continues to rise dramatically, the idea of tackling climate change through livestock management is gaining momentum around the globe.

According to the US Department of Agriculture, beef and pork consumption is expected to grow significantly over the next decade. By 2025, the average American will eat 219 lbs of meat yearly. And demand for meat products from developing economies like China and India continues to soar with no end in sight.

Is It Time for Meat Taxes?

Some countries like Belgium and the UK show meat in the same category as sugars and chocolate on their eat-well guides. Both countries recommend plant-based diets as alternatives to meat and dairy consumption. Others including Denmark, Germany and Sweden are making compelling arguments for a meat tax to reduce emissions in the same way they use carbon pricing as a mechanism to reduce CO2 emissions.

According to the FAIRR (Farm Animal Investment Risk & Return) initiative, “meat is on a similar pathway to tobacco, carbon and sugar and it is “highly probable” that some governments will begin to tax it.”

The very first global analysis of meat taxes was done in 2016. It found that tax levies of 40% on beef, 20% on dairy and 8% on chicken would save 500,000 lives each year and curtail emissions. Denmark is the first to come out with a proposal to impose a tax of $2.70 per kilogram of meat. The recommendation comes from the Danish Council of Ethics and is now being considered by the Danish government.

Nations will begin to impose a tax on meats when there is consensus over the harmful effects of meat products on both our health and our environment. Many claim this as politically impossible but the same was said about other “sin taxes” in the past.

Today over 180 jurisdictions around the world tax tobacco, more than 60 tax carbon and 25 impose a tax on sugar. Meat and dairy products are just around the corner especially as the world gets serious about mitigating the effects of a warming planet and meeting Paris Agreement targets.

As implementation of the Paris climate agreement progresses, we’re highly likely to see government action to reduce the environmental impact of the global livestock sector. On the current pathway we may well see some form of meat tax emerge within five to 10 years. ~ Maria Lettini, director of FAIRR

Related articles:
Let’s Talk About the Cow, Pig, Chicken, Sheep in the Room, Ellen Moyer
Eat Better and Help Save the Planet With Organic , Ellen Moyer