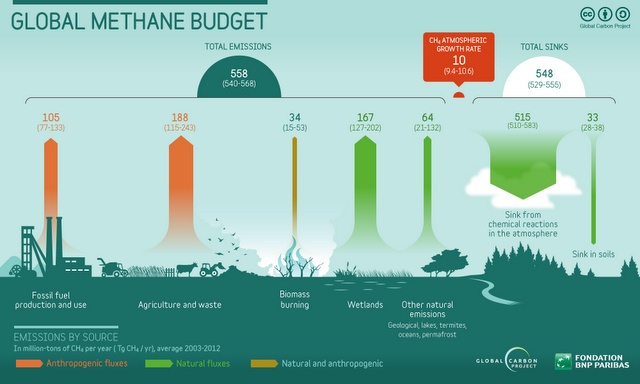 Carbon dioxide is commonly pictured as the bad boy of greenhouse gases. And even if methane is roughly 30 times more potent as a heat-trapping gas, it stays mostly under the radar in climate discussions. The Global Carbon Project reports that methane (CH4) is the second most important greenhouse gas with a warming effect 28 times more potent than CO2 during a time horizon of 100 years. The current concentration of methane levels is 150 percent above pre-industrial levels, accounting for 20 percent of warming.

The following article by Greg Allen was first published in the Ottawa Citizen. It is featured in Below2°C with his permission. (Below2°C Editors).

Information leaks, whether true, false or misinterpreted, may have political fallout. But there are gas leaks occurring that have fatal consequences for civilization and the biosphere.

Methane levels in the atmosphere have risen faster than carbon dioxide over the last century. After a hiatus over the first decade of this century, the levels are rising again. Since this was coincident with widespread hydro-fracturing in North America, researchers have been focusing attention on determining how much these practices are contributing.

Studies from Harvard and Cornell universities and, close to home, Carleton, confirm that the gas industry’s estimates of fugitive methane that are used in federal greenhouse gas inventories, are way too low. One study, using satellite data, concludes that up to 60 per cent of the global methane increase is due to North American natural gas production. When upstream emissions are included, natural gas accounts for higher GHG emissions than all other fossil fuels.

Canada took a leadership role in the Paris climate change consensus that targets a limit of 1.5 C rise in global temperature. Intergovernmental Panel on Climate Change scientists consider exceeding this limit to be dangerous.

Climate models predict that if we act aggressively now to curb CO2 but fail to drastically cut methane, we will exceed this limit within 15 years. It is no wonder that former president Barack Obama and Prime Minister Justin Trudeau signed an agreement in 2016 to reduce industry methane emissions by 45  per cent. How this will be done, how fast and how will we know are questions that need answering.

But more importantly, we need to examine whether this is sufficient and prudent.

Ontario uses natural gas for most of its heating and plans to increase its use for electricity generation while the nukes are down for repair. It supplies as much energy as transportation fuels and emits CO2 in a similar proportion.

To meet provincial GHG reduction targets, natural gas must either come from renewable sources or be phased out. Renewable natural gas is produced by fermenting bio-wastes such as livestock manure and green box waste, but the maximum supply is less than 10 per cent of current demand.

This leaves us no choice than to drastically reduce demand and switch to other renewable resources. By eliminating demand, both methane and CO2 emissions are avoided.

Even if we stop fracking in Canada, as the Green party advocates, our gas would continue to be supplied from fields south of the border. There is an even more inconvenient truth. Each fracked well drilled, about a million so far, is liable to release methane into permeable rock formations whereby it seeps to the surface.

This looming methane bomb appears yet to be adequately examined and there are no remedial measures proposed. The only responsible course of action is to transition off gas as quickly as humanly possible. Canada did this for oil heating in the 1970s.

The EcoTay Education Centre recently hosted a gathering of citizens, energy experts, and officials from eastern Ontario who met to explore the issue and develop solutions for the region. What emerged were strategies that benefited the community, such as deep retrofit, district heating, biomass cogeneration, seasonal geothermal storage and distributed renewable generation with battery storage.

Such local initiatives are providing answers that elude our provincial and federal governments.

The methane problem is the subject of several international conferences. Growing public concern will lead to demands for government policy responses. Serving the interests of corporations that profit from pollution must give way to the prerequisite of GHG abatement and it will be informed citizens that can make this politically achievable.

Greg Allen, P. Eng. has been advancing sustainable design and policy for 45 years. His family resides in Frontenac County [Ontario] in a net zero energy house.