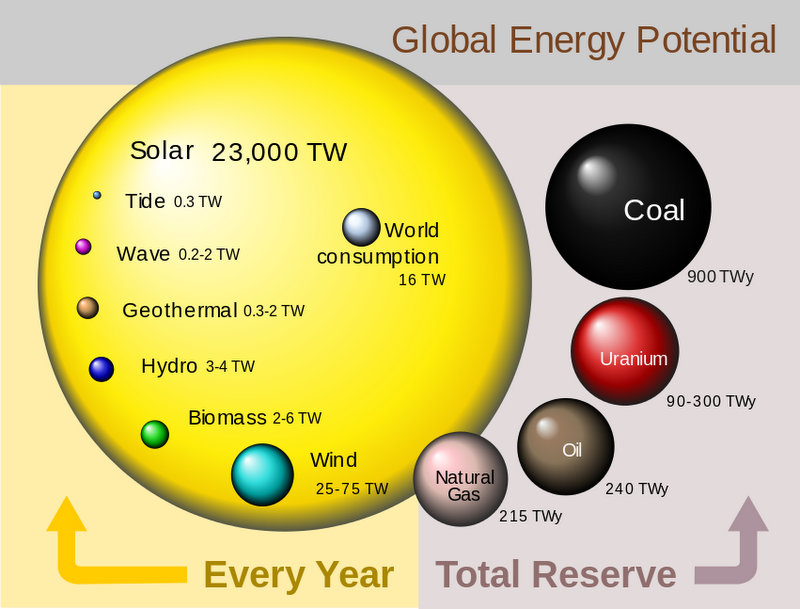 To say that the solar energy sector is on fire would be an exaggeration. But solar power is unquestionably the front runner in the world’s conversion to a low-carbon future. Energy from the sun is decidedly the largest component of any energy source available on our planet. The world’s entire energy use during one year can be provided by just one small dot of the sun’s entire surface. World energy use is only 16TWy (Terrawatts per year) compared to the sun’s 23,000 TW yearly capacity.

While the focus has been on coal, oil, natural gas and uranium for the last 200 years, humanity is now poised for the greatest energy leap ever. If only we had looked to the sun before the industrial revolution rather than waiting until now. What a different world it would be. The following info-image shows our global energy potential with a comparison of renewable and conventional energy sources. For renewables, the amount of energy is shown per year, while for conventional sources, the total reserve is displayed.

We are just at the very beginning of the clean energy revolution. And as renewables become mainstream, the era of fossil fuels will come to its torturous end. The transition from high-carbon to low-carbon energy has been called the clean disruption by Tony Seba from Stanford University. Of course, the timing is perfect as the world struggles to meet emissions reduction commitments made in 2015 during the Paris Accord talks.

This post highlights the strong leadership from the state of California, China and India in solar power. Other notables are France, Germany and Sweden.

The state of California has seen solar rise from 0.5% of its energy generation in 2010 to 10% in 2017. In fact, on March 5, solar provided an astounding 50% of the state’s energy needs. California’s current mandate to generate 50% of its electricity from renewable sources by 2030 is now considered very achievable. Moreover, the state Senate is proposing legislation that would required 100% of the state’s energy from renewable sources by 2045.

China is well ahead of target with recent installations of a “a stunning 35 gigawatts in just seven months—more than twice as much as installed by any other country in all of 2016,” Greenpeace analysts Jing Yan and Lauri Myllyvirta report on EcoWatch. “As a result, total solar PV capacity (112 gigawatts of installed solar capacity) now exceeds the government’s 2020 goal of 105 GW, set as recently as last year.” (excerpt from The Energy Mix)

A primary example of Chinese solar innovation is the world’s largest floating solar farm atop a closed-down coal mine. 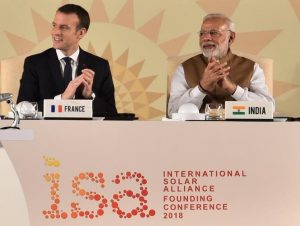 During the COP21 climate conference held in Paris in November 2015, India’s Prime Minister Modi floated the idea of forming an International Solar Alliance (ISA). His proposal was welcomed and subsequently led to the first International Solar summit co-hosted by both India and France on March 11. The 58 countries which have joined the International Solar Alliance support the ambitious plan of mobilizing $1 trillion in investments for the harnessing of solar energy. French President Macron has pledged 700 million Euros to the ISA. (Photo credit: India government)

India’s actions since the signing of the Paris Agreement reaffirm an unwavering commitment to reach its carbon emissions targets by reducing its dependency on fossil fuels. India has adopted the ambitious goal of increasing the non-carbon share of its electricity mix to 40% by 2030.

The following is but a small sample of the ongoing advancements we are witnessing in clean energy technology:

Solar power now comes in the form of a flower

Forget rooftop panels. This is the next generation of solar power.

While fossil fuels will continue to dominate the energy market for a few more years, the future of energy is clearly solar. And this transition to clean energy is decisive, irrefutable and unstoppable. As the Beatles once sang….Click Here!

Here comes the sun, and I say
It’s all right. Sun, sun, sun, here it comes. (The Beatles)

Other similar posts…
Catching the sun…
Clean Tech triumphs of 2017