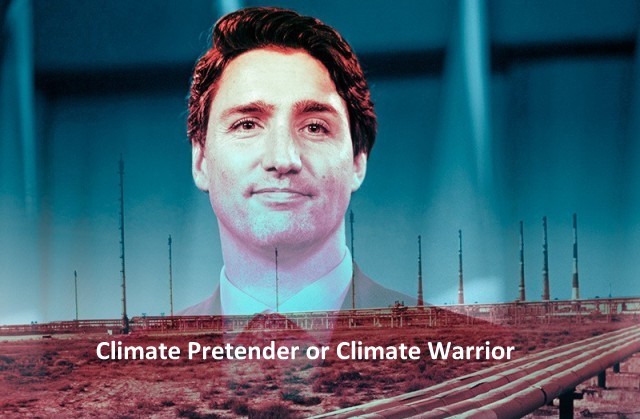 In a recent interview with CBC’s Wendy Mesley, Naomi Klein (author of No Is Not Enough and This Changes Everything) accuses Prime Minister Trudeau of only pretending to care about climate change. The debate about whether Trudeau is a climate warrior or a climate pretender started in December of 2015 during the Paris Agreement talks. It became quickly obvious that Canada has two climate faces.

I’m just looking at what they’re doing. I think their rhetoric on climate change is very good…Trudeau has given some very strong speeches, he’s raised hope of a lot of vulnerable nations [in Paris] and then went home and approved two new Tar Sands pipelines and celebrated when Donald Trump announced that he would be approving the Keystone XL pipeline. All of this is linked to Alberta’s plan to greatly increase production of Tar Sands by 40-50 percent which is completely incompatible with the two-degree target in the Paris Accord. The math doesn’t add up ~ Naomi Klein. 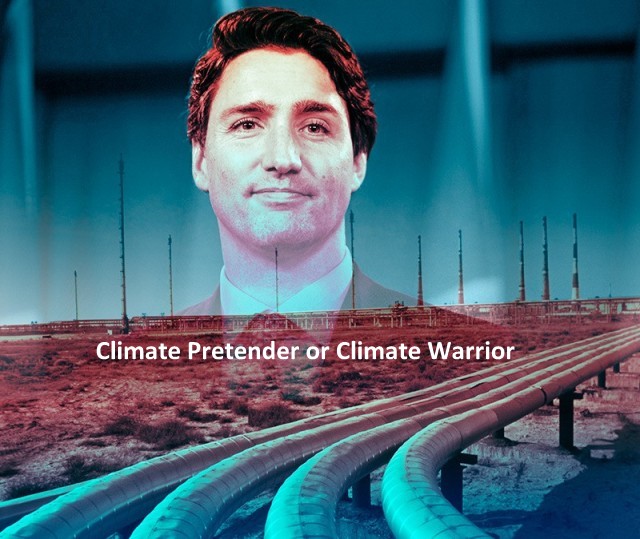 So how do we tell if Prime Minister Justin Trudeau is just pretending to go along with the Paris Agreement? What are the tell-tale signs? In a June Rolling Stone article, How to Tell If Your Reps Are Serious About Climate Change, Bill McKibben wrote “that it’s not enough for elected officials to say they believe in climate science.” He lists three simple criteria for determining whether politicians are serious enough about climate to pass the test:

Trudeau’s Liberals have yet to articulate a plan to transition to a 100 percent renewable energy platform even though multiple reports indicate that new and emerging technologies make this decidedly feasible.

Celina Bak of Analytica Advisors reports that “investments to boost clean tech in the 2017 [federal] budget aren’t moving fast enough. Without quick access to capital, many of the biggest players in Canada’s $13-billion clean tech sector will fall behind global competitors”. The Analyitica Advisors’ 2017 Canadian Clean Technology Industry Report shows that Canada’s clean tech profits are actually dropping and the industry’s market share has declined by 12 per cent from 2008 to 2015.

Canada’s Paris targets call for a reduction of 200 MtCO2 by 2030, a reduction of 30 percent — from 724 MtCO2 to 523 MtCO2 below 2014 levels. Our current carbon emissions upward trajectory will make it virtually impossible to attain that target. Still there appears to be no sense of urgency to accelerate the transition to renewables.

Perhaps the time is ripe for the federal government to switch its $3.3 billion in oil subsidies away from the fossil fuel sector in support a rapid transition to renewable energy.

Hope is not a strategy. Good intentions will not enable us to win. We have to actually execute ~ Celine Bak.

2. Keeping fossil fuels in the ground

Prime Minister Trudeau is doing everything but keeping fossil fuels in the ground as called for in Oil Change International’s report, The Sky’s Limit. According to OIC, not only must we stop exploring for more fossil fuel reserves, it is imperative to gradually scale down current operations in order to remain within the carbon budget limitations of the planet.

Trudeau has become the cheerleader-in-chief for Canada’s fossil fuel industry, approving two pipelines and cheering when Trump green-lighted Keystone. Trudeau has said that “there is not a country in the world that would find 170 billion barrels of oil and leave it in the ground”. Furthermore, he recently approved drilling in Canada’s largest marine protected area.

Trudeau is sticking to his pro-pipeline rhetoric even as evidence mounts that “new pipeline capacity isn’t needed” as reported in the The Energy Mix article about Trudeau’s fossil-climate dilemna. “The world is beginning to notice the incongruity of the prime minister’s messages…Promoting Alberta’s oil patch while embracing the urgency of mitigating carbon emissions is becoming ever less credible and harder to maintain, commentators both foreign and domestic observe.”

Bill McKibben has referred to Trudeau as a “stunning hypocrite…when it comes to the defining issue of our day, climate change,” because of his irreconcilable pro-climate and pro-fossil fuel stance.

3. Understanding that Natural Gas is the most dangerous fuel

Much as been said about natural gas being the bridge to a clean energy future. The primary argument supporting that myth is the fact that it is much cleaner than coal which is used extensively around the world. But natural gas consists mostly of methane which is a highly potent greenhouse gas, trapping 34 times more heat than carbon dioxide.

In September of 2016, Trudeau approved the Pacific Northwest Liquid Natural Gas (LNG) project which was subsequently scraped by Petronas and its partners due to depressed natural gas prices and a shifting energy industry beginning to move to a clean energy platform. In a world inundated in gas, combined with the thrust to reduce emissions globally, the window for natural gas is rapidly closing.

The New Denialism of the Climate Pretender

There’s a new type of climate denialism in Canada, a more subtle, nuanced and less visible version than the shameless denial of the past. It’s a new dis-ease that injects itself into the public discourse about climate change. Its tools are doubt, fear, halftruths, mistruths and outright lies. What makes it so despicable is its sneaky intent and willful blindness meant to deceive a vulnerable public. Its primary purpose is to create a facade of climate action.

This new denier is more sophisticated and calculating. Trudeau is the embodiment of the new climate denialism. He accepts the science of climate change, the need to price carbon, the need to transition to a clean energy tomorrow and the imperative to reduce carbon emissions. And yet, the gap between his climate rhetoric and his actions is becoming strikingly obvious.

Justin Trudeau is an artful practitioner of public messaging intended for mass consumption by a receptive but naive Canadian public. But even the slick Trudeau profile (the nice hair and flashy socks) does not hide his government’s glaring climate hypocrisy.

Our Prime Minister’s climate action charade will fool Canadians for only so long. We Canadians want to believe that we are acting quickly on the climate problem. But we are not. We are just pretending.