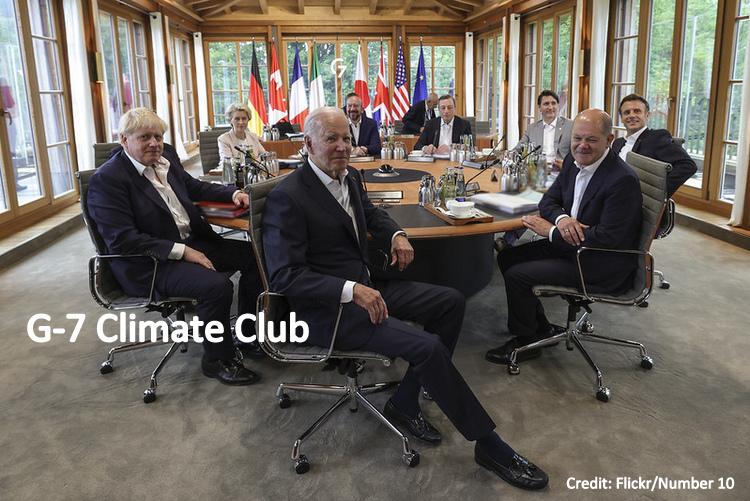 At their recent summit, G-7 leaders announced plans to form a new Climate Club by the end of the year. “We endorse the goals of an open and cooperative international Climate Club, and will work with partners towards establishing it by the end of 2022,” stated the 28-page Communiqué. The Climate Club’s goal will be “to drive urgent, ambitious, and inclusive action” in alignment with the goals of the Paris Agreement.

(The post is sourced from an OpEd co-written by Cathy Orlando and David Michael Terungwa of Citizens’ Climate Lobby – more about them at the end.)

Needs to Be More than a Talking Shop

June 30 marked the first anniversary of the Lytton Creek BC fire. After a record-setting heat-dome settled over Lytton, it was almost entirely destroyed by fire. For those who returned, they were displaced once again this past November due to the floods and landslides that resulted from an unprecedented atmospheric river.

All around the world the climate crisis is wreaking havoc.

For example the impact of climate change on Nigeria’s environmental and socioeconomic systems is compounding the country’s fragility risks. Extreme weather patterns—fiercer, longer dry seasons and shorter, more intense rainy seasons—are exacerbating challenges confronting local communities. As a result, growing desperation over food supply is driving resource conflicts across Nigeria. In short, farmer/herder violence over the past decade has worsened and disrupted business operations across the country.

The Leaders of the Group of Seven (G7), have just concluded their summit in Elmau, Germany. The G7 countries are Canada, France, Germany, Italy, Japan, the United Kingdom, the United States and the European Union.  A hopeful outcome of the G7 was the declaration of an open and inclusive climate club. The G7 declaration was also endorsed by the G7-2022 partner countries Argentina, India, Indonesia, Senegal and South Africa.

The work of the G7 is not done in a vacuum.

All the major civil society groups that engaged within the 2022 G7 including the B7 (business), C7 (civil society), S7 (science), T7 (think tank), W7 (women) and Y7 (youth) had carbon pricing or redirecting financial flows in their key climate demands.

Last year at COP 26, 450 major financial institutions committed to aligning the $130 trillion they manage to science-based net-zero targets in the Glasgow Finance Alliance for Net-Zero. This is more than enough money to transition the economy. What is needed now is government policies that will successfully mobilize private sector financing at that scale.

Making polluters pay is beginning to unleash that financing. Currently, 46 countries, including Canada, price carbon pollution. What is needed is global coordination and that is also underway. On May 16, 2022, Canada and the European Union (EU) issued a joint declaration confirming the willingness to coordinate on respective approaches to carbon pricing, carbon border adjustments to prevent carbon leakage and to engage international partners to expand the global coverage of carbon pricing. Two weeks later Canada and Chile made similar announcements.

Citizens’ Climate International leaders globally are eyeing Canada’s carbon pricing policy because it reduces income inequality and greenhouse gas pollution at the same time.  Research published in a November 2021 article in Nature reported it will be possible to reach a 2C target while also increasing wellbeing, reducing inequality, and alleviating poverty globally if countries enacted a carbon fee with an equal per capita dividend policy. Thus, with a few more policies in play in addition to carbon fees with dividends, the 1.5C goal could be reached while reducing inequality at the same time.

Just prior to the G7, the Sustainable Markets Initiative—a collection of more than 400 CEOs from every sector and chaired by His Royal Highness the Prince of Wales—put forth a three-pronged path to accelerate the transition to a sustainable future that includes carbon pricing, optimization of the the impact of public funds, and government mandates that offer the private sector clarity and stability.

A good example that would offer the private sector clarity and stability is the Honourable Senator Rosa Galvez’s Bill S-243, the Climate-Aligned Finance Act. It would guide Canada’s financial sector through an orderly transition to a low-carbon economy in order to meet our climate targets while safeguarding the financial system from the systemic risks posed by climate change.

The G7 Climate Club will need to be more than just a ‘talking shop’. It must and it can deliver concrete actions. The G7 leaders must be empowered by the fact that all the major Civil Society networks that advised the G7, a business umbrella group and climate advocates globally are now collectively pushing together for policies to transition the economy.

(The executive summary of the Communiqué is available here.)

David Michael Terungwa is a Nigerian. He is the Africa Regional Coordinator at Citizens’ Climate International. He was a member of the Global Advocacy Taskforce to the G7 this year.

Mixed reactions to the creation of the G-7 Climate Club:

From The Energy mix: “The G7 commitment on fossil fuel finance is so riddled with holes, it could be mistaken for Swiss cheese,” agreed Eddy Pérez, international climate diplomacy manager at Climate Action Network-Canada. “When it comes to cutting their addiction to fossil fuels, wealthy polluters continue to take one step forward, two steps back. They claim to understand the urgency of climate action, but underlying those nice words is a refusal to change their colonial habits of expansion and extraction—to the cost of the world’s poorest and most marginalized people.”

From Bloomberg: Canada is “looking in the medium term at expanding some infrastructure, but in a way that hits that medium term and long-term goal of accelerating the transition not just off Russian oil and gas, but off of our global dependence on fossil fuels because of the impacts of climate change,” Trudeau said.

ICYMI:
Hypocrisy and Obstruction At Climate Talks Ahead of COP27
G7: Steer Us to Safety Now
It’s Time To Stop Fixing the Old and Start Building the New