Much has been written and debated about Kinder Morgan’s Trans Mountain Expansion (TMX) during the last months — its economic merits, job creation, the Tar Sands expansion, its acquisition via taxpayer dollars, Canada’s national interest, our Paris Agreement emissions targets and more. But what about the climate impacts of Kinder Morgan. In this article, Stephen Leahy crunches out some numbers about the real costs associated with releasing more CO2 into the atmosphere. His article was first published in MotherBoard.

The scale of Alberta’s tar sands operations is hard to grasp. From near the southern limit at Marwayne, east of Edmonton, it can take six hours or longer of nonstop driving to get to the northern edge at Fort McKay. The drive takes you through many of Alberta’s 175 active oil sands projects, each spanning tens of thousands of hectares. In 2013, the most recent year for which data is available, the tar sands impacted area covered 895 km2 (346 sq. mi.)

If Kinder Morgan’s controversial Trans Mountain Expansion (TMX) is completed, the tar sands will have to get a lot bigger. The $7.4 billion pipeline expansion is designed to carry 590,000 barrels of oil products a day from Edmonton, Alberta, to a port in Burnaby, British Columbia. (The existing pipeline carries 300,000 barrels a day.) But the fate of the expansion, which was approved by Justin Trudeau’s government in 2016, is still unclear. Kinder Morgan halted construction on April 8 over what it called “uncertainty” resulting from British Columbia’s opposition due to fears over oil spills in coastal waters. It set a deadline of May 31 to get a clear political signal from governments that there won’t be additional delays. Alberta and Ottawa have insisted the project will go forward. However, on Wednesday, First Nation Chiefs from across Canada gathered at a special assembly to underline their opposition to the pipeline expansion.

Carbon Emissions Come at a Price

Texas-based Kinder Morgan claims the 1,150-kilometre pipeline will bring in a total of $2.3 billion a year in additional taxes and royalties to the federal government, and to provincial governments in Alberta and BC. Many scientists and environmentalists have pointed out that the carbon emissions associated with the project also come at a price. “Building TMX is inconsistent with Canada’s 2030 Paris target to cut CO2 emissions by 30 percent,” Simon Fraser University energy economist Mark Jaccard told Motherboard.

Although Canada’s government agrees there are real costs to decisions that result in releasing more CO2 into the atmosphere—costs that are reflected in our tax bills, insurance claims, and ill health—politicians never seem to total up those costs. Here, we gave it a shot.

This attempt to estimate TMX’s climate-related costs is based on government and scientific reports on how much additional carbon dioxide (CO2) will be emitted to produce the oil products, including diluted bitumen—a tar-like form of crude oil—to fill the new TMX pipe. It does not include the impacts of the far larger amount of CO2 released from using the stuff in cars and trucks.

With the 2016 Paris climate agreement, governments around the world—including in Canada—recognized that every ton of CO2 added to the atmosphere will have a range of economic impacts related to climate change, including decreased agricultural yields, harm to human health, and increased damages from flooding and storms.

Canada and the US have assessed the cost of those impacts at C$45 per ton of CO2 (all figures in Canadian dollars). This is known as the social cost of carbon, or SCC: a monetary measure of the incremental damages expected from an additional ton of CO2 in the atmosphere.

If the TMX is built, it will carry 590,000 barrels of heavy oil a day alongside the existing Trans Mountain pipeline, bringing the total capacity up to 890,000 barrels of oil per day. Tar sands’ current total production of 2.5 million barrels a day is being accommodated by existing pipelines and rail. Despite complaints about pipeline bottlenecks, if TransCanada’s Keystone XL pipeline to Nebraska and Enbridge Inc.’s Line 3 expansion to Wisconsin go forward, more than a million additional barrels a day could be exported.

Production and processing of an additional 590,000 barrels a day to fill the new TMX pipe would emit 13 to 15 million tonnes of CO2 a year, according to a 2016 report by Environment and Climate Change Canada (ECCC). These are called upstream emissions, while downstream emissions are produced by the refining and burning of the product.

ECCC says its upstream emission estimate does not include emissions from the destruction of forests and wetlands, nor from producing the electricity or fuel used in transportation. Moreover, it did not estimate how much land could be impacted, and told Motherboard that the “publicly available data and established methodologies currently do not allow for the inclusion of land-use change emissions.”

“We know that building a new pipeline will generate emissions,” said a Kinder Morgan media representative. The company estimates building the pipeline will result in an estimated one million tonnes of CO2, mainly from land-clearing activities and burning vegetation. The National Energy Board has required Kinder Morgan to offset these emissions. Offsets could include planting trees, investing in carbon capture and storage, or buying emission credits from other parties.

Still, upstream emissions of 15 million tonnes of CO2 a year is a lot: It’s equivalent to adding another 3,750,000 passenger vehicles on Canadian roads.

So 15Mt of CO2 per year, at a social cost of carbon (SCC) of $45 per tonne, means TMX would result in $675 million a year in economic impacts. That number will climb over time: As emissions accumulate in the atmosphere, so does the cost of damage from every additional tonne of CO2 emitted. In 2030, the SCC is expected to rise to $54.50, pushing the climate damage from the pipeline to $817 million a year. Of course, it’s not just Canadians who will have to deal with this. The impacts will be global, with the poorest countries hit hardest.

Specifically, the SCC used today fail to account for biodiversity losses, ocean acidification, long-term impacts on labor productivity and economic growth, impacts on the poorest, as well as the possibility of extreme and irreversible changes, they said. 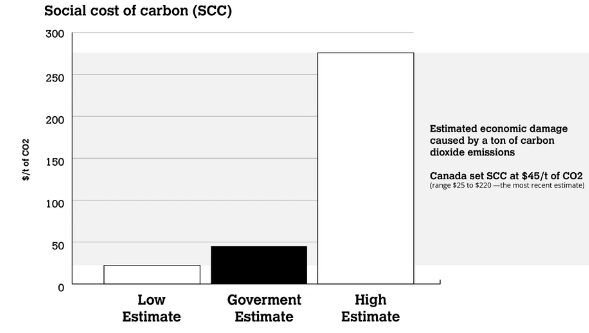 This suggests the $45 SCC is likely too low. I ran the numbers with the $275 SCC estimate published by Stanford University. In that case, the economic costs of the upstream emissions of the TMX expansion that Canadians and the rest of the world will pay is just over $4.1 billion a year. For comparison, Alberta’s entire royalties from all tar sands operations totaled $1.48 billion in 2016-17, which was more than the previous year.

Figuring out the emissions from the destruction of forest and wetlands is difficult but important, given the immense size of tar sands projects. Just under half of these projects involves surface mining, and a process that digs up layers of peatland and sand 50 metres deep to get at the tarry bitumen. The other recovery method, in situ, involves pumping superhot pressurized steam underground to melt out the bitumen so it can be sucked up to the surface.

If half of the TMX’s 590,000 barrels a day comes from surface mining, approximately 34,000 hectares of boreal forest and peatland will have to be mined. This is based on scaling up the footprint of Horizon oil sands mining project, currently producing 240,000 barrels a day.

A 2012 study in the Proceedings of the National Academy of Sciences on the tar sands mining operations estimated that digging up the forested peatland releases between 1,400 to 5,700 kg per hectare of CO2. Based on this, digging up 34,000 hectares will release up to to 194Mt of stored CO2. An SCC of $45 means the climate impacts will cost Canada between $2.1 to $8.7 billion.

I could find no comparable data on the impacts of in situ tar sands operations on the landscape to try and make a similar calculation. (One 2009 study suggests the impact is comparable to mining oil sands.)

To summarize: The climate impacts of the TMX will cost at least $2.1 to $8.7 billion upfront, and at least $675 million a year, for as long as the pipeline operates. As for the downstream emissions of 105 Mt per year, maybe someone else will foot the bill?