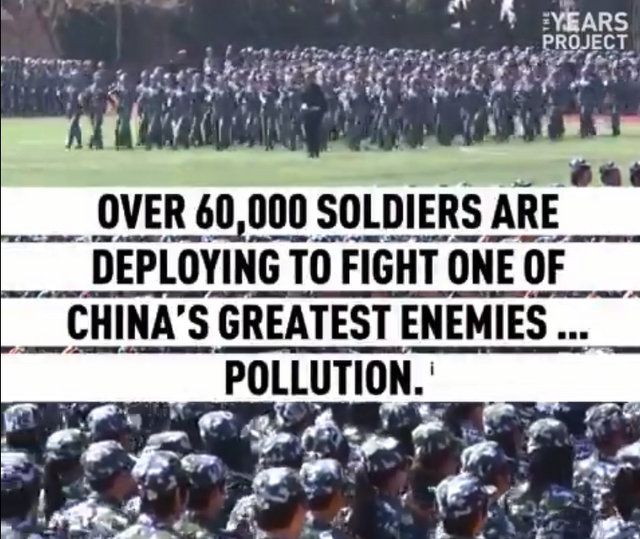 The world’s biggest emitter decided to take some serious climate action – and in the process renewed our hope that we will beat the climate crisis.

Source: The YEARS Project: We Can Solve This video

Ten years ago, the idea that China – the planet’s single biggest carbon polluter – would be a global leader on climate in 2018 would have sounded, well, a stretch.

But with terrifying levels of air pollution threatening to spark social unrest in earlier years and the US stepping back from the global stage under President Trump, that’s exactly what’s happened.

The story begins with a massive public health crisis, but how China responded – and five steps in particular – lays out a practical path to a low-carbon future for countries around the world.

It all goes back to the “Airpocalypse.”

Not too long ago, many in some of the Chinese cities were going about their business engulfed in a cloud of pollution. The gray haze could be so dense, that buildings and trees would quite literally disappear in front of your eyes. And stepping outside, even for just a minute, required wearing a facial mask to avoid directly breathing the toxic air.

The source of much of that pollution wasn’t hard to find either: coal-fired power plants and vehicles on the road. Since the early 2000s, China’s economy had been growing rapidly, powered largely by coal.

The unchecked use of coal on such a huge scale didn’t take long to generate real problems. In 2005, China surpassed the United States to become the world’s biggest CO2 emitter (a title that the country has held since the 20th century). And in 2008, 16 of the 20 most polluted cities in the entire world were in China, according to the World Bank.

In 2013, the Chinese government finally decided that enough was enough, introducing a national action plan to curb air pollution, including a set of coal consumption limits for key regions including Beijing and the Pearl River Delta.

In 2016, China released its national plan for the 2030 Agenda for Sustainable Development, and committed to lowering the country’s carbon intensity of GDP by 60–65 percent (below 2005 levels) by 2030 in its Nationally Determined Contribution (NDC) to the Paris Agreement. As the world’s second-largest economy – and home to nearly 1.4 billion people – that’s a big deal to the world.

It hasn’t all been smooth sailing. Emissions are still rising as the country continues to grow. And although China has halted many coal projects over the past years, environmentalists have called it out for investing coal energy in other countries such as Turkey and Pakistan to satisfy its immense need for energy.

On the other hand, China has made real progress. Between 2013 and 2017, Chinese cities cut the amount of fine pollution particulates(PM2.5) in the air by an average of 32 percent. And the capital Beijing has seen a lot more sunny days as PM 2.5 concentration dropped 54 percent in the fourth quarter of 2017, in comparison to the same period of 2016.

On a global level, there’s also good news. China has been instrumental in keeping the Paris Agreement process going, continuing to curb emissions and expand renewables even as the US (another huge polluter) has dramatically backed down at the federal level.

So how’s China done it? There have been many steps, but five have been especially key.

China has been slowly (but surely) moving away from coal energy. Last year, the government announced plans to cancel 103 new plants and closed the very last coal plant located in the capital, Beijing.

From 2014 to 2015, coal consumption declined after a decade of steady increase.

2. Putting a Price on Carbon

One of China’s most impressive moves was to launch the world’s largest national carbon trading market in 2017. The goal is to encourage companies to become greener by allowing them to sell or buy excessive carbon emissions. The first phase of the project only covers the power generation sector, but the initiative is expected to expand across many other areas of the economy.

China is so keen on green that it’s deploying soldiers to plant trees across the country. The goal is to replant many of the forests that were cut down for industrialization and farmland, all with an eye to removing carbon from the atmosphere on a massive scale and doing it naturally.

Sowing seeds is actually one of the country’s Paris Agreement goals – China wants to increase forest stock volume by 4.5 billion cubic meters by 2030, from its 2005 level. China is also planting a different kind of forest on its buildings to help sequester carbon.

Moving away from fossil fuels and toward renewable energy is not just an effective way to clean up the planet. It’s also a good investment.

In 2017, China invested a staggering US$ 126.6 billion in renewable energy – 45 percent of the total worldwide investment. The country has been using a whole lot of green technology internally  – nearly doubled its solar generation from 2016 to 2017. But it also has its eyes on a much larger international market.

China is showing the world how to move many people around quickly and cleanly. Around 17 percent of the country’s municipal buses are electric, and the city Shenzhen holds the record for the globe’s largest electric bus fleet, with all of its 16,359 buses having gone electric last year. The achievement was only possible due to government subsidies. But in the long run, operation and maintenance costs of electric buses are significantly lower than those fueled by diesel.

The Catalyst – Choking on Pollution

The catalyst was the sight of millions choking on industrial and power sector pollution. That visual has been one of the most influential for emissions reduction and energy transformation the world has ever seen.

The good news is that it doesn’t take a public health crisis for countries to embrace these and other practical solutions. The world’s second-largest economy has already shown they work, and now it’s time for other nations to follow its lead.

Want to stay updated on climate action across the globe? Join the Climate Reality activist list. Climate Reality will deliver the latest on climate science and innovative ways you can get involved in the climate movement right to your inbox.

This article was first published in the Climate Reality Blog.