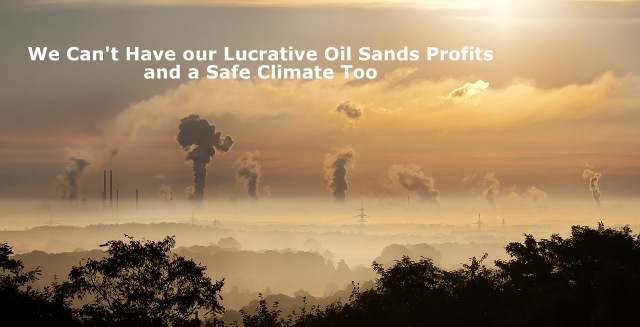 “Continued investment in the oil sands generally, and in the Trans Mountain pipeline specifically, means Canada is doubling down on a no-win bet,” write Thomas Homer-Dixon of the Balsillie School of International Affairs and University of Waterloo doctoral candidate Yonatan Strauch in a recent Globe and Mail op-ed.

On the one hand, the Trudeau government is betting that in spite of a global climate consensus — the Paris Agreement — the demand for oil will continue to rise. We will continue to use more oil including our own dirty and expensive Tar Sands oil. “We’re betting on climate disaster,” writes Homer-Dixon.

On the other hand, if the 195 signatories to the Paris Agreement get serious about meeting their emission-reduction targets, then we, the taxpayers of Canada, will be left holding the bag. The multi-billion investment in the Kinder Morgan pipeline and Trans Mountain expansion will be a bust “because the first oil to be cut will be higher-cost oil such as ours,” he adds.

Heads or tails, we lose. That’s the idiocy of it. We can’t have our lucrative oil sands profits and a safe climate, too.

Canada’s Paris pledge is to reduce its greenhouse gas emissions by 30% of 2005 levels by 2030 – from 722 megatonnes annually in 2015 to 517 megatonnes by 2030. But “it’s virtually impossible to do so if the oil sands’ output rises to Alberta’s cap of 100 million tonnes of carbon dioxide emissions a year,” suggest the authors. There is no room in the world’s carbon budget for Alberta’s Tar Sands expansion. It’s simply not compatible with keeping the warming of the planet below the 2C threshold which is the premise of the Paris Agreement.

Prime Minister Trudeau and his Liberal government could have carved out a different path. Rather than spending billions on a pipeline, those same billions could and should be used to create a clean energy transition fund. Trudeau’s current path is economically, politically and morally unsupportable.

In a world where oil demand must decline, the Trudeau government has adopted a climate-energy strategy that is economically unsupportable. In the short term, Justin Trudeau is betting that pipeline investments can still be profitable in spite of a clean energy transition that is gaining momentum. Trudeau’s risky gamble will likely run out of time.

Instead of clinging to a fading fossil fuel industry we should be embracing the future. Instead of building a pipeline which will create a few hundred full-time jobs, we could be installing hundreds of thousands of solar panels and building wind farms that will lead to the energy jobs of the future.

Tony Seba, who teaches at Stanford University, is a guru of the clean disruption phenomenon. He believes that electric vehicles (EVs) will transform the transportation industry and create huge problems for the oil industry by 2030. Already, countries like France, Britain and Norway have announced the ban of gas and diesel vehicles starting between 2030 and 2040. And China, which has the world’s largest car market, is developing a plan to phase out the sale of fossil-fuel powered vehicles.

“The fissures in our federation over climate and energy policy are now extraordinarily deep, and there’s little sign that they’ll close soon,” write the authors. “The commitment to the oil sands are contorting our politics and encouraging our leaders to use double-speak and cynicism to hide the terrible nature of our gamble.”

Homer-Dixon and Strauch suggest that “Canadians should do their part to cut emissions, even if some countries aren’t currently pulling their weight.” It is our moral imperative. We owe this to our children and grandchildren.

But Alberta’s Tar Sands expansion makes that impossible by consuming a disproportionate share of the country’s emissions targets. Alberta makes up 11.6% of Canada’s population but it produces a whopping 37.5% of our GHG emissions. By comparison, Ontario is the most populous province with 38.3% of the population but only 23.3% of Canada’s GHGs

To those who think an oil-rich Canada can be a prosperous winner in a world that exceeds the Paris emission targets, it’s time to think again.