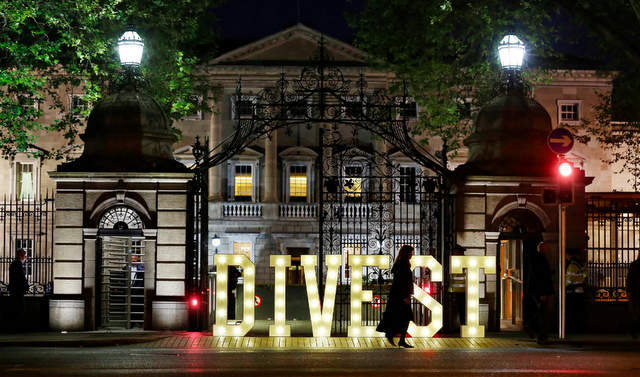 Humanity is in a race against time. Our planet is warming. We are witnessing a scorching summer on a global scale. The Arctic is melting. Oceans are the hottest ever recorded. The evidence is irrefutable.

However, the world is waking up to this new reality. And change is happening.

Countries are gearing up to reduce their greenhouse gas emissions to meet their Paris Agreement targets. Governments, individuals, corporations and the fossil fuel industry are beginning to address the climate problem. There are thousands of new initiatives and actions to mitigate against the effects of climate change and bend the curve on rising emissions. A few are referenced below.

Ireland is becoming the world’s first country to divest from fossil fuels. It plans to do so within the next five years. The Irish €8bn Strategic Investment Fund holds €300m in fossil fuel investments in 150 companies. Ireland has been slow to react to the climate challenge but with this announcement is sending a powerful signal that the world must plan for a managed phase-out of fossil fuels to avert catastrophic climate change.

Governments will not meet their obligations under the Paris agreement on climate change if they continue to financially sustain the fossil fuel industry. Countries the world over must now urgently follow Ireland’s lead and divest from fossil fuels ~ Gerry Liston, Global Legal Action Network.

As reported in The Energy Mix, Sweden in on track to hit its 2030 renewables target later in 2018, a full 12 years ahead of schedule.

“By December, Sweden will have 3,681 wind turbines installed,” the news agency states, citing the Swedish Wind Energy Association. “Together with second-half investment decisions, that will be more than enough capacity to meet a target to add 18 terawatt-hours of new renewable energy output by the end of next decade.” The association expects 7,506 MW of wind capacity to be installed, mostly on land, by the end of the year, with a total of 2,609 MW coming online this year and next. (Excerpt from The Energy Mix article)

“California beat its 2020 emissions target four years early,” headlines a recent Fortune article. This is a notable achievement in this era of rising greenhouse gas emissions.

“In 2016, California’s greenhouse gas emissions were lower than in 1990, despite a larger population and booming economy, the state’s air resources board reported. Emissions in 1990 were 431 million metric tons and they were 429.4 million metric tons in 2016,” notes the article. The emissions reduction is equivalent to removing 12 million vehicles off the road.

Repsol SA is a Spanish energy company which has just made the stunning announcement that it will no longer pursue a growth strategy for its oil and gas business. Repsol is preparing for the inevitable transition to a clean energy future. It will soon disclose a new business plan that limits oil and gas output to current levels and reduces reserves to no more than eight years.

The company recognizes that an industry shift is on the horizon. And other European oil producers are also seeking to shift to renewable energy. Royal Dutch Shell is building refueling stations for hydrogen and electric vehicles; Norway’s Statoil has re-branded itself as Equinor and is starting to diversify its energy repertoire by adding floating wind farms.

The city of Seattle has introduced a ban on plastic straws and utensils for all food service businesses — restaurants, coffee shops, cafeterias and grocery stores. Seattle is the first city in North America to do so. The regulation comes after growing pressure by environmental groups advocating for such bans. Straws and plastic utensils are some of the most common littered items and, because of their small size, easily end up in rivers, lakes and the oceans.

McKibben is writing “with a Guinness clutched in one hand, because this week the government of Ireland gave us a big reason to celebrate: it became the first nation on earth to commit to fully divesting from fossil fuel companies.”

On the other hand, McKibben is merciless when it comes to Canada. “But unfortunately, by buying out a dying pipeline project, your Prime Minister and self-styled climate champion, Justin Trudeau, has cemented a place for himself on the wrong side of history,” writes McKibben.

He encourages Canadians to continue to oppose the Trudeau pipeline buy-out by joining the People’s Town Halls taking place across the country. Although the Trans Mountain deal is to be finalized by July 22, the fierce opposition to the Kinder Morgan pipeline will not cease.