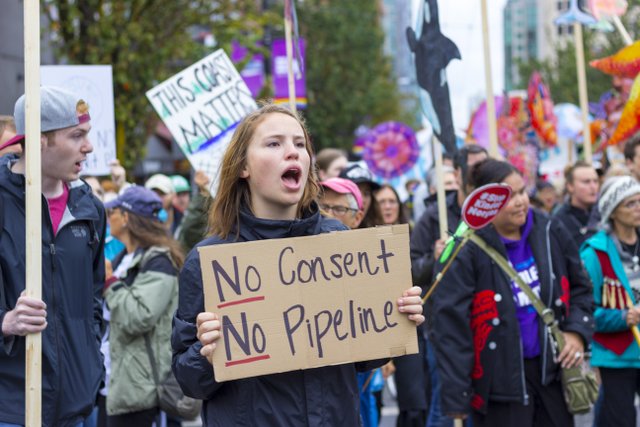 Remember the Northern Gateway pipeline? How about the Energy East pipeline? Neither got built. Both projects got quashed due primarily to public resistance. As opposition and resistance build in the coming months, Kinder Morgan will become the next pipeline to nowhere. (Editorial comment).

On July 22 the Canadian government missed the deadline to find a private sector buyer for the Kinder Morgan pipeline project.

Corporations are now seeing the writing on the wall for new major fossil fuel projects (including their prospects for profit) in a era of transition away from fossil fuel reliance. Meanwhile our federal government remains committed to its false narrative about the Kinder Morgan pipeline, jobs and the economy.

Members of Trudeau’s own Youth Council made national news last week with their open letter and call to action to cancel the KM Buyout.

“We, a group of young Canadians, are writing to express our immense disappointment in the decision announced on May 29, 2018 to buy Kinder Morgan’s Trans Mountain pipeline project for 4.5 billion dollars. The young people of Canada were major supporters of your candidacy during the 2015 election, largely due to the promises you made on issues such as reconciliation and climate leadership. When you appointed yourself as Minister of Youth, you indicated that you were willing to step up to the challenge of listening to and honouring the concerns of our generation– a commitment that is predicated upon a safe and sustainable future. The decision to buy the Trans Mountain pipeline project calls into question your commitment to young Canadians.”

Considering the Trudeau millenial vote, this threat should sting. You can support their message with this Coast Protectors action alert.

Kanahus Manuel was recently arrested by the RCMP (and released) on unceded Secwepemc Territory/Clearwater for allegedly defying an eviction order from the BC Parks service. This happened after BC Parks service gave Kanahus and others present an eviction order from the North Thompson Provincial Park, the location of a three-day tattooing ceremony that grew into a Kinder Morgan blockade by July 11 (Kanahus says this was a Secwepemc village site).

Kanahus is an important part of the Tiny House Warriors work, building tiny homes strategically placed on the pipeline route, on unceded Secwepemc territory, to block access to it. She recently provided an update on Facebook that the Tiny Homes have been moved to the site of the proposed Kinder Morgan man camp. For more on the man camps and the serious problems they present, see the Secwepemc Women’s Delcaration Against the Kinder Morgan Man Camps.

You can donate to the Tiny House Warriors work here (as highlighted on their website).

Townhalls and Screenings of Directly Affected

The townhalls invite MPs to hear from their constituents on this $4.5 billion dollar (and rising) decision. Directly Affected, is a moving documentary that: “…weaves together the stories of people impacted by the Trans Mountain Pipeline Project, the broken National Energy Board review process used to approve the pipeline, Canada’s commitments at the Paris Climate Talks and the innovators working towards the low-carbon economy.”

[Across Canada hundreds of other groups are gathering for Directly Affected and discussing the federal government buyout of Kinder Morgan’s Trans Canada pipeline].

On July 3rd, twelve people from Coast Salish territories, British Columbia, Alberta, Ontario, Quebec, the U.S., the U.K. and Mexico, rapelled down the Ironworkers Memorial Bridge, blocking the path of an oil tanker in the Westridge Marine Terminal that was loaded with tar sands crude from the Kinder Morgan pipeline.

As quoted in the National Observer, “I will remain the fierce opposition. It is in my blood to protect the water,” declared Will George, one of the climbers and the leader of Kwekwecnewtxw. “Our Indigenous rights are being completely ignored, the safety of our water is being ignored, and most of all, my son’s future is at stake. I will do whatever it takes to protect the water and my family and your family.

On July 14, over 100 Indigenous people and environmentalists joined by international crews from the Greenpeace ship Arctic Sunrise, formed a flotilla to protect water and take a stand against the pipeline expansion, holding a water ceremony in the Burrard Inlet.

On July 19 three Greenpeace members scaled the outside of the Olympic Stadium tower in Montreal with a banner – Stop pipelines, don’t dirty our money – in protest of the buyout.

While media had previously reported government, including Trudeau, saying construction would ramp up this summer, this seems unlikely. The government doesn’t fully take ownership until the early fall according to various media reports, and Kinder Morgan is unlikely to pony up more money for these efforts.There is also a significant string of regulatory hurdles that still need to be crossed.

As reported in the Vancouver Sun, “According to the National Energy Board, the project only has approval to proceed with construction at Westridge, the Burnaby Terminal, various pump stations and various temporary infrastructure sites. The NEB has approved 68 per cent of the pipeline route.

Of the 1,179 permits needed from the B.C. government for the expansion project, 242 have been approved. Another 266 permits that have been submitted are under review. And 671 permits have yet to be submitted.”

This article was first published in Council of Canadians Blog by Andrea Harden-Donohue.

Other #StopKM posts you might have missed…
Kinder Morgan’s Trans Mountain Pipeline: 9 Reasons We Shouldn’t Be Buying The Pipeline or The Spin
Can Trudeau Pull Out Of The Kinder Morgan Deal
Climate Economic Impacts From Kinder Morgan May Total $8.7 Billion