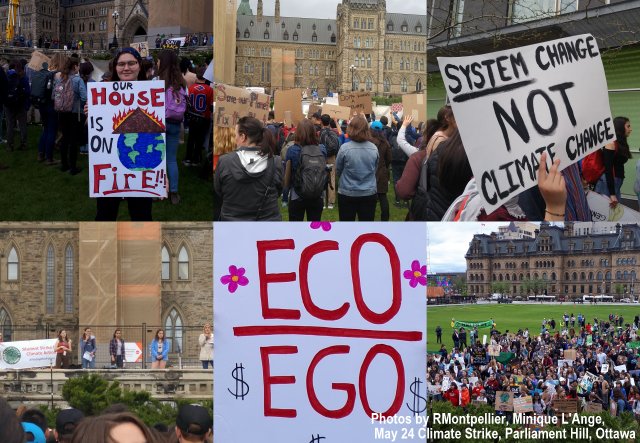 “Greta Thunberg speaks for and to all of us,” writes Warren Bell in his opinion piece in The National Observer.  Greta speaks with a clarity and a force that reaches very deep inside each of us. Her message cannot be ignored: If we persist mindlessly in our destructive and exploitative behaviour, if we continue to pretend we’re not in a climate crisis, then we will pay a dreadful price. “Sorry if this is inconvenient for you,” she tells adults. “But this is not a single-generation job. It’s humanity’s job.” (Editor’s intro)

The following article by Gaye Taylor was first published in The Energy Mix.

The day before more than one million young people in 125 countries around the world took to town and city streets yet again to demand climate action, #FridaysforFuture founder Greta Thunberg called upon all adults, and especially parents, to “step up alongside us” in a global climate strike September 20.

In what organizers say was the largest #schoolstrikeforclimate action yet, students from New Delhi to Berlin, from Ottawa to Seoul, from Auckland to Stockholm, absented themselves from their classrooms May 24, rallying to the ongoing calls for climate action from Thunberg, and to their own urgent sense of a planet in crisis—and their futures in peril.

In the words of a young junior who co-organized her Connecticut high school’s mobilization last week, “The world is our home, right? So we have to do the best we can to preserve it. If the adults in our politics aren’t making a change, then we have to take a stand.”

Sorry This Is Inconvenient For You

In an open letter to The Guardian published May 23, Thunberg and 46 other youth activists address the ongoing failure of adults—from politicians to parents—to acknowledge that our planetary home really is “on fire,” and to act on that knowledge.

Speaking about the school strikes, Thunberg and her peers write that after being witness to “years of talking, countless negotiations, empty deals on climate change, and fossil fuel companies being given free rides,” they feel they have no choice but to take the accumulating and accelerating lessons of the climate crisis to the streets: “We have learned that if we don’t start acting for our future, nobody else will make the first move. We are the ones we’ve been waiting for.”

But now that the first move—by brave children who refused to be intimidated—has been made, write the activists, adults everywhere need to throw off their complacency and acquire the requisite courage. In her characteristic “emperor-has-no-clothes” idiom, Thunberg writes: “We feel a lot of adults haven’t quite understood that we young people won’t hold off the climate crisis ourselves. Sorry if this is inconvenient for you. But this is not a single-generation job. It’s humanity’s job.”

Thunberg points out scathingly that, whereas in other times of crisis adults have raced to the defence of their offspring, “today we children are fighting for ourselves, [while] so many of our parents are busy discussing whether our grades are good, or a new diet, or what happened in the Game of Thrones finale.” Warning that those “comfort zones” are actually death traps, she invites all adults, “neighbours, co-workers, friends, and family,” to join children and youth in a worldwide strike for the climate on Friday, September 20. You can join now.

This is a battle that “has to happen,” she adds, reminding readers that the Intergovernmental Panel on Climate Change has been “clear about the unprecedented dangers” of allowing a global temperature rise in excess 1.5ºC. Framing the issue with a precision that hammers home both the urgency of the climate crisis and the stake that all young people alive today have in its resolution, Thunberg observes that “emissions must drop rapidly—so that by the time we are in our mid and late 20s, we are living in a completely transformed world.”

“But to change everything, we need everyone,” she adds. Short hours before more than one million young people would roundly prove her point, Thunberg urges, “it is time for all of us to unleash mass resistance—we have shown that collective action does work. We need to escalate the pressure to make sure that change happens, and we must escalate together.”

The Largest Climate Strike Ever

As reported by Time and an array of other major news outlets, the May 24 #schoolstrikeforclimate event saw children and youth out in vast numbers, testifying together to their precise understanding of climate change as a global crisis that begins at home. Amongst the 2,000+ actions around the world were demonstrations by Senegalese youth against a controversial coal plant, and demands by students at Cape Town University that their school divest from fossil fuels.

In Melbourne, 1,000 student activists staged a die-in in their city’s financial district, responding to the May 18 re-election of Australia’s climate-denying conservative government, the country’s hottest summer on record, an ongoing drought that is savaging the country’s farmers, and news that the Great Barrier Reef grows ever weaker as the oceans warm. Thousands of miles north, in the Philippines, student activists included child survivors of 2013’s devastating Typhoon Haiyan.

In the UK, youth marched hours after Prime Minister Theresa May announced her resignation, seizing the opportunity to demand climate leadership from the next PM. In Toronto, teens on the same wavelength as their peers in Melbourne zeroed in on the financiers of Bay Street. Notable in many of the #schoolstrikeforclimate actions was a profoundly empathetic recognition that climate change is already being cruelly felt by those least responsible for causing it.

14-year old Toronto teen Cecilia La Rose told media that recent floods and the growing threat of wildfire are “scary” wake-up calls, and that she fears for those living in rural areas and in Indigenous communities who “will be impacted first.”

Adults Must Deal With Their Complacency

Adults still inclined to complacency—even after listening to, or reading, Thunberg and any one of her millions of followers—might want to absorb a recent opinion piece by Helen Mountford, vice president for climate and economics at the World Resources Institute. Citing a recent article in the journal Nature, Mountford writes that while “we have only 12 years left” has become the rallying cry for the world’s student activists, the reality is even more terrifying.

“Global greenhouse gas emissions must peak no later than next year and rapidly decline thereafter for us to have a good chance of preventing increasingly severe consequences from the climate crisis—everything from imperiled croplands [to] flooded communities and widespread disease,” she warns. “Delaying any longer will push us toward an ecological tipping point, with no way for humanity to claw its way back out.” Recent research also suggests that participating in climate protests actually increases one’s sense of agency—reinforcing Thunberg’s call to action for the global strike September 20. “People have risen up before to demand action and make change,” she writes. “If we do so in numbers, we have a chance. If we care, we must do more than say we do. We must act. This won’t be the last day we need to take to the streets, but it will be a new beginning. We’re counting on you.”

Climate Action: It’s Time To Switch to Cathedral Mode
Can Students Save Humanity When We Adults Could Not