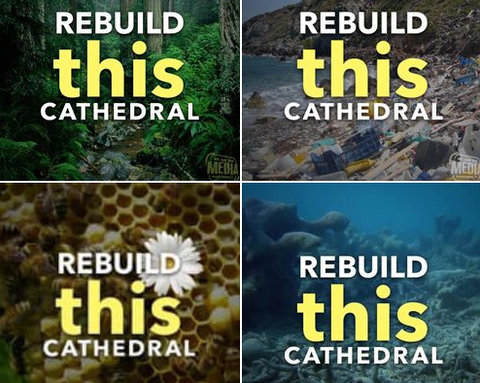 Let’s imagine for a few chilling moments that our house is on fire. That our house is being destroyed, falling apart in front of our very eyes. Then think Notre-Dame Cathedral—the symbolic home of millions of Catholics in France and around the world. Then think climate action. Then think of the glaring dissimilarity of response for both. Let that sink in for a few seconds.

I was amazed at the outpouring of support for the rebuilding and restoration of such an important structure, a work of art many would say. At the same time, the hypocrisy surrounding Notre-Dame is inescapable. If we could only react to the climate crisis in the same way. If we could only switch to cathedral mode immediately.

Cathedral Mode for the Climate

The hypocrisy did not go unnoticed by Greta Thunberg, currently the world’s foremost climate activist. During her recent speech to the European Parliament, Greta highlighted the urgency to act on climate change:

If our house was falling apart our leaders wouldn’t go on like we do today… Well, our house is falling apart and yet nothing is happening. We’ll have to switch to cathedral mode. I ask you to wake up and do what is necessary.

As Notre Dame was still burning—in less than 24 hours—over 1 billion euros were committed to the rebuilding and preservation of the cathedral. This is more than France’s total pledge to the Green Climate Fund—new global fund to support developing countries to respond to the climate challenge. Donations began to pour in as the fire was still burning.

I cannot help but wonder why we humans are so easily captivated or seduced in such large numbers by isolated events and (in the grand scheme) trivial things—the Notre-Dame fire, sports events, Donald Trump, Brexit, celebrities, mass shootings, floods, hurricanes, airplane crashes, Megan and Harry—and yet fail to see the climate crisis that is upon us. The ‘insignificant’ continues to seize an inordinate amount of attention while the planet burns. This is reflected in David Schneider’s tweet:

If we could all actually watch in horror at our planet being destroyed in the same way we watched in horror as Notre Dame was being destroyed, we might do more to stop it. #ExtinctionRebelion https://t.co/uyI7EKvgKB

A number of new climate movements such as Fridays For Future, Extinction Rebellion and We Don’t Have Time represent exciting new voices sounding the alarm globally about the urgency of climate action. “While Notre-Damn is undoubtedly a tragedy, it shows that money and resources can be mobilized rapidly in times of anguish. Why are we not seeing the same reaction on climate change?” writes James Ellsmoor in his Forbes Opinion piece.

In fact one could argue that the opposite is happening. The evidence on the ground is disheartening. Global banks led by JP Morgan Chase have invested $1.9 trillion in fossil fuels since the signing of the Paris Accord in 2015. Canada’s 5 largest banks have invested $338 billion.

Global emissions rose nearly 3% to an all-time high in 2018. And in Canada, emissions continue to grow pushing us further away from our Paris pledge to slash greenhouse gases by 70% by 2030, based on 2005 levels.

The top four hottest years (as a group) are the last four, 2015-2018.  Furthermore, scientists at the  Climate Prediction Center at the National Oceanic and Atmospheric Administration warn that 2019 will likely become the warmest year yet.

“If our house was falling apart” is a phrase she repeated numerous times during her speech to highlight the tremendous inertia of current political thinking about climate action. She ended her speech with these words: “What we are doing now can soon no longer be undone…It will take cathedral thinking. To do your best is no longer good enough…I beg you, please do not fail”.

Can Students Save Humanity When Adults Could Not?
Fear and Frustration Over Climate Trigger New Climate Movements