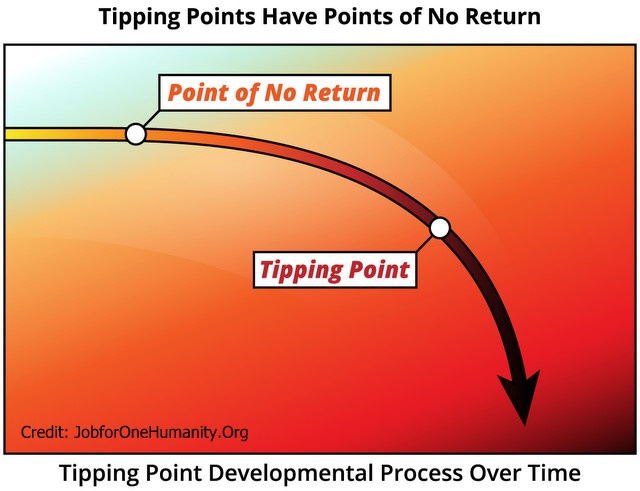 Humanity is in a race against time, caught between two competing tipping points. And our timeline is compressing. We now measure scientific knowledge and technological progress in months and years, not decades.

Due to a rapidly changing climate, the world is racing toward the irreversible collapse of the Earth’s ecosystems and life as we know it . A recent (May 2019) landmark report by the UN’s IPBES (Intergovernmental Science-Policy Platform on Biodiversity and Ecosystem Services) shows that the rate of species extinction and the decline in biodiversity are speeding up, with alarming implications for human survival.  One million species are at risk of extinction warns the report. It is now believed that humans have triggered a sixth extinction.

In November of 2018, the release of the IPCC’s Global Warming of 1.5°C special report sent shockwaves around the world with a stark warning that we have but 12 years to keep the warming of the planet at no more than 1.5°C higher than pre-industrial levels.

It is now abundantly clear that we are getting dangerously closer to this first tipping point. The question is can we slow it down? Can we stop it from tipping?

The second tipping point “is when the fight for climate action tips from being just one of many political concerns to becoming a mass social movement,” reports Democracy, A Journal of Ideas. Our only hope is to create a global socio-political movement that will counteract the effects of “two centuries of fossil capitalism….that have created powerful vested interests, systems inertia, and mental frameworks that blind us to the dangers and prevent us from seeing alternatives.”

We are facing an existential question. And yes there is hope. But our hope is pitted against the advancing menace of climate change. Our challenge is to dramatically speed up these efforts and tip first before climate does.

Which tipping point will prevail?

There is No Future for Us without Nature
A Terrifying Twelve Years: Sounding The Climate Alarm Bells