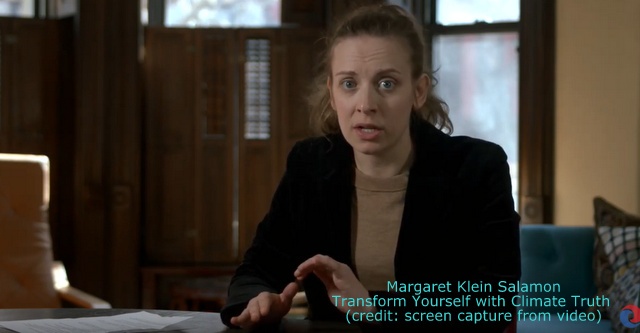 We’re supposed to save the world. That’s why you’re alive right now in this time of great consequence. Humanity is putting together a team to cancel the apocalypse. And you might not realize it but your name is on the roster. ~Margaret Klein Salamon

Margaret Klein Salamon is a clinical psychologist who transformed her life after her own confrontation with climate truth. She founded and directs The Climate Mobilization, a grassroots advocacy organization that demands WWII scale climate mobilization.  In this video, Margaret discusses her book, Facing the Climate Emergency: How to Transform Yourself with Climate Truth. “I’ve had hundreds of conversations with people about the inner emotional, personal side of confronting this crisis. I have helped people process their feelings and turn their fear, grief, anger into fuel for effective action,” says Margaret.

Below2C editor’s note: The following is an excerpt (first published in Common Dreams) from the author’s forthcoming book Facing the Climate Emergency: How to Transform Yourself with Climate Truth.

The Climate Crisis and the Future We Thought We Had

Where do you see yourself in 10 years? In 20? Perhaps you plan to be advancing in your career, married, with children or retired, living near the beach, traveling often. Whatever it is—have you factored the climate crisis into it? In my experience, most people have not integrated the climate emergency into their sense of identity and future plans. This is, a form of climate denial.

The vast majority of Americans—especially educated, successful, powerful, and privileged Americans—are still living their “normal” lives as though the climate crisis was not happening. They are pursuing their careers, starting families, and even saving for retirement. They know, intellectually, that the climate crisis is real, but they have not faced that reality emotionally, they have not grieved the future they thought they had, and consequently, they have not been able to act rationally or responsibly.

Thankfully, this is starting to change. Thanks to the efforts of the School Strikers, The Climate Mobilization (the organization which I founded and direct), Extinction Rebellion, the Sunrise Movement, leaders like Rep. Alexandria Ocasio-Cortez, authors like David Wallace Wells, and many more, people are increasingly confronting the terrifying reality of climate truth, and looking for help processing and making sense of what they find.

After you acknowledge the apocalyptic scale and speed of the climate emergency, you must allow yourself time to grieve. There are so many losses: the people and species already lost, your sense of safety and normalcy.

“My grief enabled me to remember my connection to all life, and helped me  let go of the illusion of my separate self. If the forests die, I die. If the oceans die, I die.”

Grieving for your future

Above all, in order to live in truth, we have to grieve for our own futures—the futures we had planned, hoped for, and thought we were building.  Grief is appropriate. On one hand, this is the loss of an abstraction, not a living creature. On the other, it’s a huge loss—the loss of our most cherished plans, goals, and fantasies.

When I was a child, I remember my mother telling me that I could be anything I wanted to be.  I knew this wasn’t literally true, but I also knew that I had many options. I studied at Harvard, then earned a PhD in clinical psychology with plans to write books about psychology for popular audiences. I imagined myself married with children. What a lovely life I had planned! It was going to be meaningful, intellectually stimulating,  financially rewarding, and rich in relationships.

But there was one problem.

When I forced myself to learn about the climate crisis, when I fully grasped its reality, and when I started the process of grieving what was already lost, I also realized that my lovely life was… not going to really work. Maybe I could still pull off living my perfect life—at least for a decade or so—but it would happen while tens of millions of refugees streamed out of regions made unlivable by heat, drought, or flood, and while state after state failed and threatened the collapse of humanity and the natural world.

Ultimately, I had to acknowledge that the future I was planning on was ruined. I was never going to lead a happy and satisfying life while watching the world burn, no matter how much self-care I practiced. I already felt that I was simply too interconnected with the planet for that. I had to say goodbye to the future I had planned on, and, in many ways, I had to say goodbye to the person who had made those plans. And so I had to grieve those losses too.

Grief is not optional

Psychotherapists know that grief is not optional: when confronted with devastating losses, grief is the only healthy way to respond and adapt to new realities. If we stop ourselves from feeling grief, we stop ourselves from processing the reality of our loss. If we can’t process out loss, then we can’t live in reality. We become imprisoned and immobile. Grief ensures we don’t get stuck in the paralysis of denial, living in the past or in fantasy versions of the present and future. Think of the widower who cannot acknowledge the death of his wife, never cleans out her closet, and is thus never able to create a full life without her.

The climate emergency threatens to destroy our shared and personal futures.  It challenges basic assumptions about progress—that, as Dr. Martin Luther King Jr said “the arc of history is long but it bends towards justice.” The climate crisis threatens to set back thousands of years of human development. It has ruined the futures we had planned. It has also made the present—what we do now—almost unbearably important. Our actions now, this year and next year, have a incalculable amount of importance to all life.

When I grieved the loss of the future I had planned for myself, I gained the ability to engage more fully and meaningfully in the here and now of reality and morality. You can, too. Changing course allowed me to set out on a new path, with a new future dictated by the personal mission to do whatever I could to help society confront the truth, and initiate a global response to the climate crisis. Letting go of my hopes and plans that were, in themselves, a kind of climate denial—allowing me to live in line with my values and in climate truth. This action allowed me to feel a hope that was powerful enough to motivate my transformation into a climate warrior who is prepared to do everything that I can to prevent catastrophic outcomes from fully unfolding, and to help restore the health of the climate and protect all life.

“Only when you are able to face the future as it is—not as it was or as you dreamed it would be—will you fully grieve and be ready to move on.”

My grief enabled me to remember my connection to all life, and helped me let go of the illusion of my separate self. If the forests die, I die. If the oceans die, I die. I am entirely dependent on the natural world for my life and safety.  The natural world will only survive if humanity has a collective awakening and commences emergency mobilization. I realized, as Dr. King Jr. wrote in “Letter from a Birmingham Jail,” that “We are caught in an inescapable network of mutuality, tied in a single garment of destiny.”

I realized that I was only truly going to be able to thrive on a healthy planet where humanity realizes that we must take seriously our responsibility to protect and nurture the natural world and each other. Understanding this meant I had to shed my former self and go far beyond my goals for personal happiness and success, and reorient them around helping to create the collective awakening that we need.

You, too, must grieve the future you’ve dreamed of. It’s a hard step, but it’s also part of the necessary work of stepping into the now and facing our climate emergency. This way, we can turn grief into power.  Once you realize that the future you thought you had is not going to happen, you can begin to think of yourself differently. If humanity’s two choices are to transform or collapse, the only rational, moral choice is to immerse yourself in the struggle to protect all life.

Only when you are able to face the future as it is—not as it was or as you dreamed it would be—will you fully grieve and be ready to move on. To help as you grieve the future you thought you had, ask yourself: