When Greta Thunberg began her friday climate strikes on August 20, 2018, she promised to continue her weekly protests until Sweden reduced carbon emissions in line its Paris Agreement commitments. Since then, her legendary rise to become the world’s leading environmental activist has propelled millions to call for more ambitious action on the global climate emergency. In Canada, a million of us hit the streets on September 27 crying out for aggressive climate policy that matches the scope and severity of the climate crisis we are facing.

If Canada Was Sweden 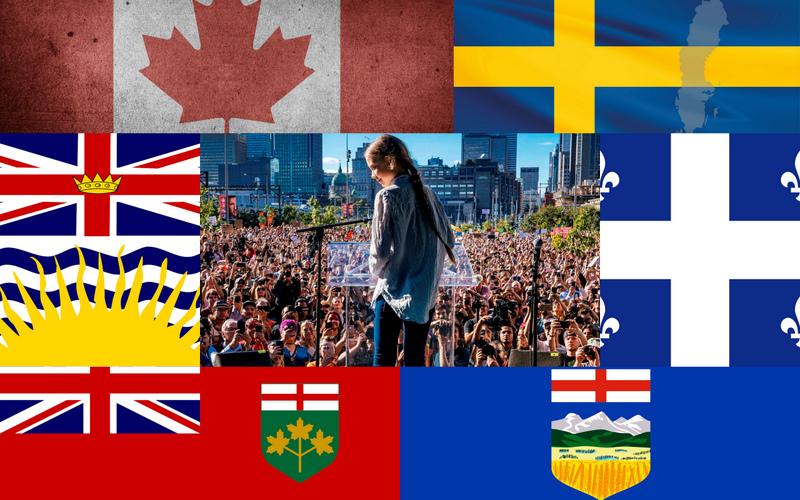 There are many similarities between Canada and Sweden. Geographically, both countries are located in the northerly part of the northern hemisphere. Both have small populations living largely in urban centres but also widely scattered in rural areas. Both have a large living space per capita. So how do both countries compare on climate policy and emissions reduction? Barry Saxifrage provides some answers in his recent piece in the National Observer. 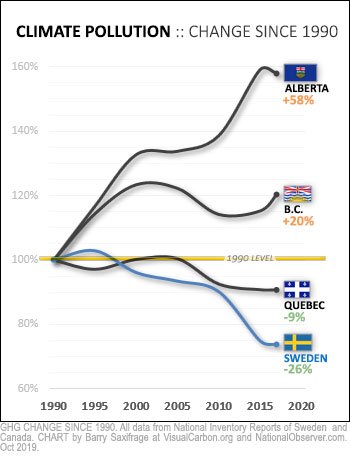 Ten years ago, Canada signed the Copenhagen Accord pledging to reduce its GHG emissions by 17% below 2005 levels by 2020. We will miss that goal by a country mile. We’re actually 20% above our target.

The main culprit killing any hope for reducing emissions on a national scale is Alberta which shows an alarming increase of 58%. Alberta makes up 11.6% of Canada’s population but it produces a whopping 37.5% of our GHG emissions. By comparison, Ontario is the most populous province with 38.3% of the population but only 23.3% of Canada’s GHGs.

The Saxifrage chart (above right) compares the three provinces recently visited by Greta—B.C., Quebec and Alberta—to Sweden which has scaled down its pollution by 26% during the same time frame.

“Sweden’s efforts show that it is clearly possible for wealthy northerners to achieve the kinds of pollution reductions we promised – and a whole lot more. Heck, the U.K. has managed to pull off a 41 per cent reduction since 1990,” writes Saxifrage.

This Saxifrage chart shows climate pollution per person for Sweden and the same three provinces.

The Swedes again come out on top in a comparison of tonnes of CO² per person with Quebec, Alberta and British Columbia.

Under the Paris Accord, Canada has committed to a 30 percent reduction in emissions by 2030 (compared to 2005 levels). By refusing to do its share of the heavy lifting, Alberta single-handedly  threatens to kill all of Canada’s climate goals.

In a previous piece, Saxifrage shows how our national carbon budget is “being eaten up by climate pollution from Alberta’s oilsands industry.”

The emissions gap between Swedes and Canadians is sure to widen as the Kenney government in Alberta doubles down on the unrelenting expansion of oilsands production. Similarly British Columbians face the grim prospect of more pollution resulting from the further development of LNG projects. 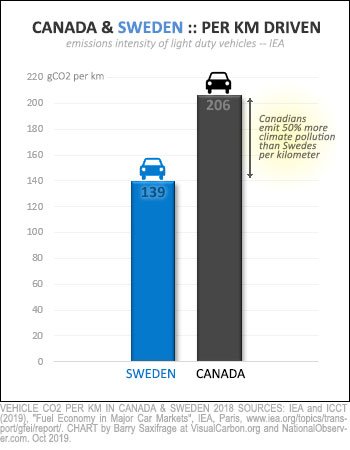 Many people reading this subtite will think immediately that comparing the driving and flying habits of Swedes and Canadians is an unfair comparison. We have much greater distances to travel. But Saxifrage takes this into account by comparing the amount of pollution per kilometre for the average passenger vehicle.

Our average Canadian vehicle dumps 206 grams of CO² per kilometre into the atmosphere. This converts to 4,850 kilometres of driving for each ton of emissions.

Swedish cars fare much better. They produce 139 grams per kilometre and can drive 7,200 kilometres for each ton they emit—50% better than their Canadian counterpart.

The climate impacts of driving and transportation in general are increasingly under the microscope as we struggle to remain within the global carbon budget. Using more efficient travelling modes—buses, rail, EVs, car pooling—will stretch our distance travelled per tonne of CO².

As Greta has indicated quite openly, Sweden is not climate-perfect. There is much room for improvement. On flying alone, Swedes pollute three times more than the global average. In comparison, Canadians are at 4.6 times the global average.

The latest environmental movement sweeping Europe and Scandinavia is flygskam, an anti-flying movement that started in Sweden.  Flygskam translates to ‘flying shame’. And Greta’s decision to stop flying is shining the light on this trend. “I’ve decided to stop flying because I want to practice as I preach, to create opinion and to lower my own emissions. One person who stops flying will not make a difference. But if a large number of people do then it will. It sends a message that we are in a crisis and have to change our behaviour,” says Greta Thunberg.