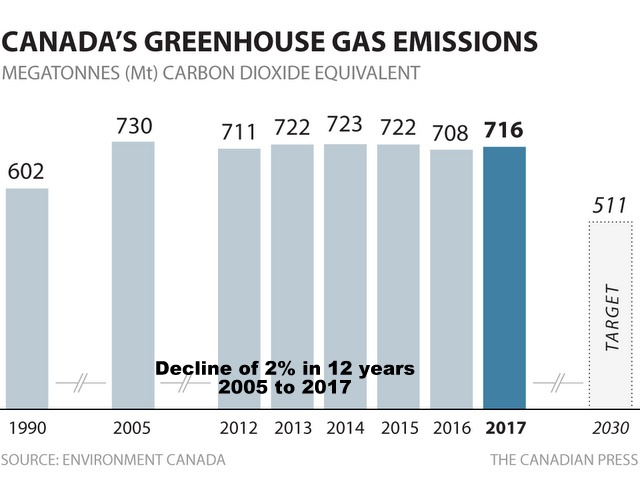 Every year Canada submits its latest greenhouse gas inventory to the United Nations Framework Convention on Climate Change (UNFCCC). The 2019 report is not a pretty picture. It shows an increase of 12 million tonnes of carbon dioxide (12MtCO2) over the last year. The report shows the total amount of greenhouse gases produced in Canada hit 716 million tonnes, up from 708 million tonnes the year before. We are going the wrong way.

Not On Pace To Reach Paris Emissions Target

We Canadians are far off pace from meeting our Paris Agreement target of a 30% reduction from 2005 levels. In his recent analysis featured in the National Observer, Barry Saxifrage claims Canada will meet its targets, but two centuries late,.

Saxifrage points out that an extra 12MtCO2 is “equivalent to tossing another New Brunswick’s worth of emissions onto the already huge pile that needs to be eliminated.”

The gap between Canada’s climate commitments and climate actions is growing wider and wider. In 2016, with a newly negotiated Pan-Canadian climate plan in hand, hope ran high. Projections showed we could get within striking distance—44 MtCO2s—of our 2030 Paris target. But that was in a perfect world where carbon pricing would be welcomed by all provinces and territories.

In spite of this setback, Catherine McKenna (Minister of Environment and Climate Change) continues to insist that Canada will meet its Paris target. Perhaps McKenna lives in a parallel universe in which Canada proclaims itself as a climate leader, supports fossil fuel expansion, buys a pipeline and is still able to reduce emissions by 30% by 2030. In the world I live in, which I call reality, Canada is on a fast track to blow by its 2030 target as well. 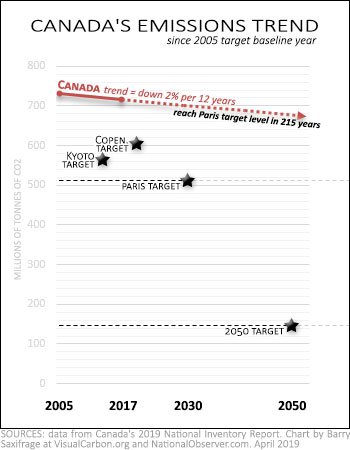 We are more than half way through the 2005 to 2030 emissions-reduction time frame. And since 2005, emissions have declined by a mere 2%. Saxifrage’s chart shows a downward trend that is “so foot-draggingly slow that it will take two centuries for Canada to reach its Paris target at that pace.”

It’s a funny thing about targets. I’ve never met one …. I met, someone told me once. Canada did not meet its Kyoto targets—6% total reduction by 2012 compared to 1990 levels of 461 Megatonnes. And we did not meet our 2020 emissions reduction target—17% by 2020 set in Copenhagen years earlier. With months to go, we will blow by that target by nearly 20%—a 37% swing in the wrong direction.

The Oil and Gas Sector is a Climate Killer 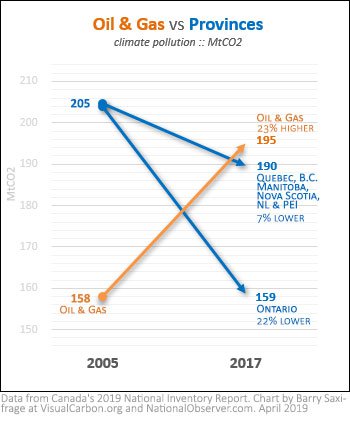 The oil and gas sector, which is centred in Alberta, is killing Canada’s Climate Plan, and with it, any hope of reducing emissions in any significant way. The sector spews out 50 million tonnes more than Canada’s 2050 climate target. Its emissions are spiralling out of control—a 23% increase since 2005.

The Climate Culprit is Alberta

The obvious culprit in Canada’s rising emissions gap is Alberta. The Tar Sands alone pollute more than the entire British Columbia or Quebec economies. And in spite of this outrageous climate injustice being forced on all Canadians, Alberta is promising to ramp up its oil production and build more pipelines under the newly elected pro-fossil-fuel-anti-climate Jason Kenney, Canada’s latest climate monster.

Environment groups say the oilsands’ impact on Canada’s emissions cannot be overstated. Keith Stewart, a senior energy strategist at Greenpeace Canada, said “emissions from the oilsands eclipse those from every province except Alberta and Saskatchewan.”