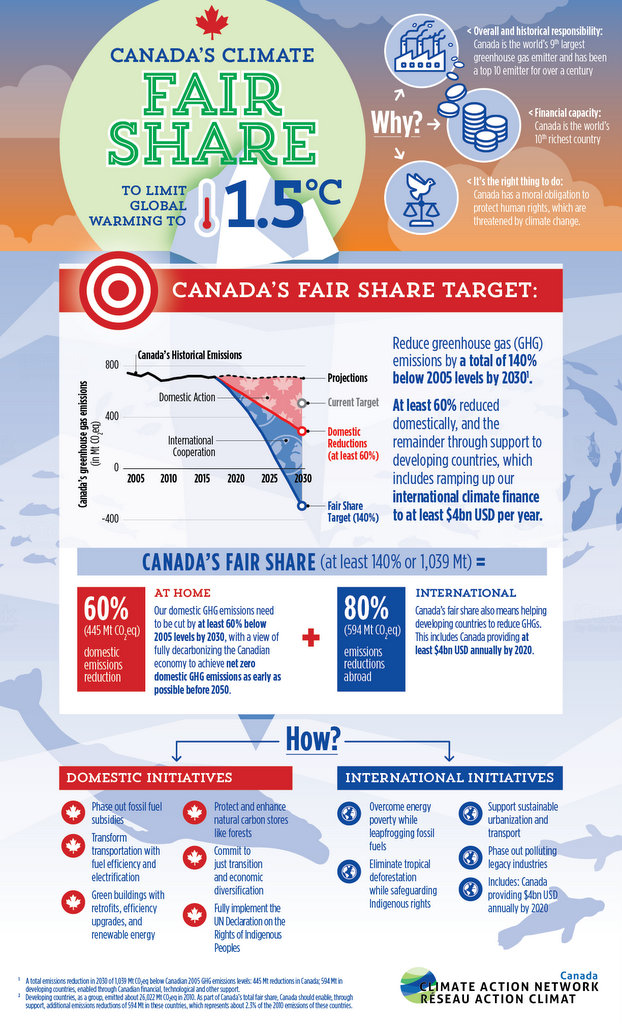 United Nations Secretary General Antonio Guterres has dubbed the Madrid COP25 summit as the “point of no return” in the fight against climate change. We’re reminded daily of the impacts of climate change, and in spite of decades of warnings from climate scientists, carbon emissions continue to rise. The science is clear and undeniable: humanity is in a climate emergency.

And so isn’t it time to get real about the climate crisis? How about starting with the premise that every country needs to do its fair share? How about expecting that every country—including Canada—first live up to its Paris Agreement commitment of “holding the increase in the global average temperature to well below 2 °C above pre-industrial levels and pursuing efforts to limit the temperature increase to 1.5 °C” as per Article 2.1.a?

It’s Time to GET REAL Canada

(Source: Infograph above and text below from CAN blog article by Catherine Abreu, Executive Director, Climate Action Network)

Climate Action Network Canada believes that Canada must do its fair share towards a global effort that ensures that global warming is limited to no more than 1.5°C without overshoot.

Canada has substantially contributed to the global buildup of greenhouse gas pollution in the atmosphere for over a century, and continues doing so today, reaping enormous economic benefits but also accumulating a substantial carbon debt. This means that Canada bears a large responsibility for creating the climate crisis and, as a wealthy country, possesses considerable capacity to act to address it.

As a result, Canada has a moral obligation to cut domestic greenhouse gas emissions as fast as technically and economically feasible, while also substantially supporting emissions reductions in developing nations as part of our total fair share towards a 1.5°C-consistent global effort.

Specifically, our domestic greenhouse gas emissions need to be cut by at least 60% below 2005 levels by 2030, with a view of fully decarbonizing the Canadian economy to achieve net zero domestic GHG emissions as early before 2050 as possible.

Additionally, our fair share includes an obligation to enable a reduction in developing countries’ greenhouse gas emissions equivalent to a total Canadian contribution of 140% of Canadian 2005 emissions. This would cut emissions in all developing countries¹ on average by 2.3% below their 2010 levels in 2030, in addition to the reductions² that they achieve on their own or with other wealthier countries’ support.

Priorities for Canada at COP25

Day by day, citizens from all corners of the world are saying “enough!” Enough with unresponsive, unambitious political leadership that continues to feed the root causes of inequality and climate injustice. Enough with economic and political systems that put profit before people and the interests of wealthy polluters before the interests of young people, workers, vulnerable communities and Indigenous peoples. — Catherine Abreu

Citizens from around the world are saying “enough!” But what will the greater than 26,000 people—negotiators, policymakers, researchers, scientists, business leaders, heads of governments, activists, journalists, campaigners— attending the Madrid COP25 climate talks say? Will they also say enough? Our future depends on it.