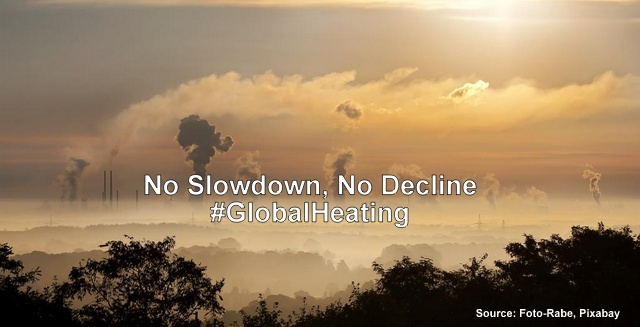 The 1.5°C and 2°C temperature targets of the Paris Agreement are fast becoming just an unachievable dream. With only 121 months left to 2030—the target date set by the IPCC— the unrelenting increase of greenhouse gases (GHGs) shows no decline, not even a slowdown. Our failure to meet Paris commitments will open the door to a nightmarish future of runaway #globalheating and catastrophic climate change.

This article was first published in Common Dreams.

“There is no sign of a slowdown, let alone a decline,” warns the World Meteorological Organization chief.

In yet another signal to global governments that greater ambition is needed to combat the climate crisis, an annual United Nations report just released reveals that levels of long-lived greenhouse gases in the atmosphere reached record highs last year.

No Decline, No Slowdown in GHGs

“These values represent, respectively, 147%, 259%, and 123% of pre-industrial (before 1750) levels,” the bulletin noted. In terms of contributions to warming the climate, “carbon dioxide is the single most important anthropogenic GHG in the atmosphere” among all long-lived greenhouse gases, the primary focus of the report.

Both methane and nitrous oxide are emitted by natural sources, but about 60 percent of CH4 emitted into the atmosphere comes from human activities such as biomass burning, cattle farming, fossil fuel exploitation, landfills, and rice agriculture, according to the bulletin. About 40 percent of N2O comes from human sources, including fertilizer use and various industrial processes.

From 2017 to 2018, concentrations of all three gases surged by higher amounts than the yearly increases documented over the past decade.

“Since 1990, there has been a 43% increase in total radiative forcing—the warming effect on the climate—by long-lived greenhouse gases,” the WMO said in a statement announcing the new bulletin.

The bulletin was released a week before the next U.N. Climate Change Conference, COP 25, is scheduled to start. Representatives from across the globe will meet at the conference in Madrid to discuss governments’ commitments to tackling the human-caused climate emergency, including obligations under the 2015 Paris accord.

The 🌍 is on track for a temperature rise of over3°C. This would bring mass extinctions & large parts of the planet would be uninhabitable.

WMO Secretary-General Petteri Taalas, in the agency’s statement, tied the bulletin’s findings to the necessity of bolder climate action on a global scale.

“There is no sign of a slowdown, let alone a decline, in greenhouse gases concentration in the atmosphere despite all the commitments under the Paris agreement on climate change,” Taalas said. “We need to translate the commitments into action and increase the level of ambition for the sake of the future welfare of… mankind.”

“It is worth recalling that the last time the Earth experienced a comparable concentration of CO2 was 3-5 million years ago,” he added. “Back then, the temperature was 2-3°C warmer, sea level was 10-20 meters higher than now.”

Inger Andersen, executive director of the U.N . Environment Program—which last week released a report detailing how projections for fossil fuel production by 2030 are “dangerously out of step” with global climate goals—connected the bulletin to UNEP’s next annual Emission Gap Report.

“We face a stark choice: set in motion the radical transformations we need now, or face the consequences of a planet radically altered by climate change.” Inger Anderson

“The findings of WMO’s Greenhouse Gas Bulletin and UNEP’s Emissions Gap Report point us in a clear direction—in this critical period, the world must deliver concrete, stepped-up action on emissions,” Andersen said.

U.N. Secretary-General António Guterres tweeted the WMO bulletin and wrote, “another record that shows we are not doing enough to address the climate emergency.”

The bulletin elicited renewed demands from activists for both governments and the private sector to ramp up efforts to drive down greenhouse gases, particularly by phasing out fossil fuels.

The level of greenhouse gases in the atmosphere has reached another record high, according to @WMO.

Another record that shows we are not doing enough to address the climate emergency.

“The record rise in greenhouse gas concentrations is a cruel reminder that for all the real progress in clean technology, we have yet to even stop global emissions increases,” Nick Mabey, chief executive of global think tank E3G, told The Guardian. “The climate system cannot be negotiated with. Until we stop new investment in fossil fuels and massively scale up green power the risks from catastrophic climate change will continue to rise.”

Related articles:
Disconnect Between Paris Climate Goals and Countries’ Policies on Fossils
Can Litigation Save Us From Climate Change?