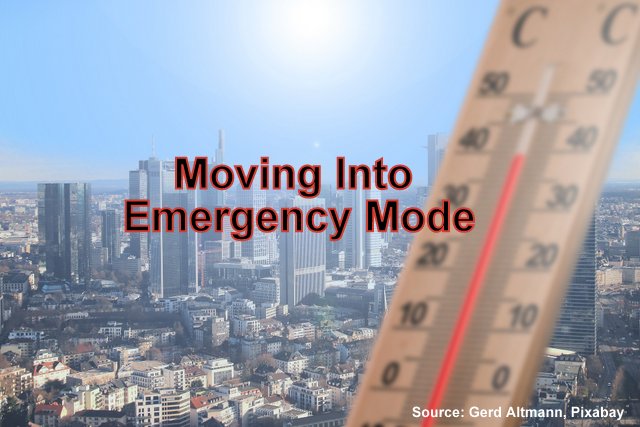 The enormity of the climate problem we face cannot be confronted with a business-as-usual approach. The climate solution requires going into emergency mode.

In her revised essay, Leading the Public Into Emergency Mode, Margaret Klein Salamon argues that “we must tell the truth about the climate emergency…and act as though that truth is real. Everyone will need to shift into “emergency mode” in order to create the politics that will address climate destruction with the scale and speed it requires…the goal of the climate movement must be to lead the public out of “normal” mode and into emergency mode.”

Following are excerpts from her May 2019 revised essay. You can read the full essay here.

Get Talkative and Loud

People who understand the climate emergency must exit normal mode and abandon the gradual policy advocacies and enervated emotional states that accompany it. Instead, we must seek to restore a safe climate at emergency speed. To accomplish this, the climate movement must lead the public into emergency mode.

First we must go into emergency mode ourselves, and then communicate about the climate emergency and need for mobilization with clarity, dedication, and escalating assertiveness.

We Need a National Consensus

The climate crisis poses a challenge unlike anything humanity has ever faced. Full-scale emergency mobilization requires a higher degree of participation and consensus than treating AIDS, implementing civil rights legislation, or even toppling a dictator. In order to initiate the WWII Scale Climate Mobilization that we need, I believe we need a national consensus that we are directly threatened by the climate emergency.

Thus we must seek to be as inclusive as possible, while unwaveringly demanding WWII-scale climate mobilization. Our tone must balance emergency-mode, steadfastness, assertiveness, and inclusiveness.

Many people who understand the scope of the climate crisis are paralyzed by fear and helplessness. Empowerment, the solution to helplessness, is a key element of all social movements.

The best thing that we can do to confront the pervasive sense of helplessness and despair is to rapidly build an effective and public Climate Emergency Movement.

After decades of politicians and environmental organizations downplaying and soft-pedaling the threat, The Climate Mobilization and the Climate Emergency Movement proposes a corrective: tell the truth. Yes, it’s scary. Yes, the challenge before us is immense.

While considered “too hot to handle” by gradualists, the truth is actually our movement’s greatest strategic asset. The truth is that no human endeavor can succeed on a planet beset by catastrophic climate change. None of our values, joys, or relationships can prosper on an overheated planet. There will be no “winners” in a business-as-usual scenario.

Indeed, having candid conversations with our friends and family is something that everyone can and should do. If we are silent, our understanding does not become power. Disrupt pluralistic ignorance! Break the silence! Come out of the “Climate closet” and let your friends and family know how you feel about the climate emergency.

Many people worry about the social awkwardness of bringing up the climate emergency — but keep in mind, many of your friends and family are also worried, and will be relieved and appreciative when you do bring it up, especially if you can offer them support and guidance. Be personal, be emotional, be authentic and empathetic. Hear people out and make them feel listened to. (Image from The Climate Mobilization)

The Emergency Threat is Real

The climate movement must fully adopt the language of immediate crisis and existential danger. We must talk about climate change as threatening to cause the collapse of civilization, killing billions of people, and causing the extinction of millions of species. These horrific outcomes await us during this century, possibly even in the first half of it if things truly slip out of control. This is not a matter of “protecting the planet for future generations” but protecting our own lives and those of the people we care about. We are in danger now and in coming years and decades. The climate crisis is, far and away, our top national security threat, top public health threat, and top threat to the global economy.

We cannot be silent about the fact that emergency mobilization can only be coordinated by a “big” government that is granted the power to ban ecologically destructive practices and spend without limit to save as much life as possible. We must acknowledge that gradual approaches that prioritize political expediency and the alleged wisdom of the “free market” over the common good are doomed to failure.

We need to eliminate net greenhouse gas emissions in years, not decades, and remove excess greenhouse gases from the atmosphere until a safe climate is restored. This will take a whole-society, all-out effort.

The truth vs. False Narratives 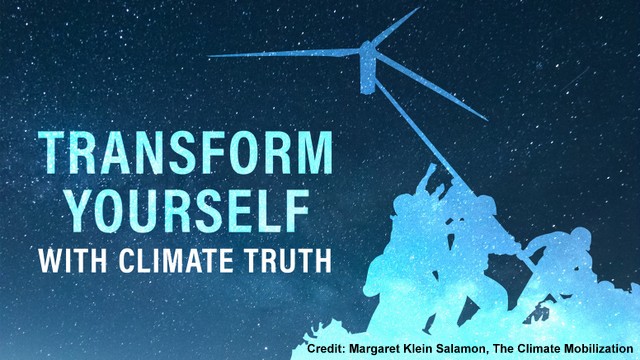 Representing the truth, and moving the public into emergency mode means letting go of false or misleading narratives that shield the public (and ourselves) from the frightening truth. Instead, we must fully accept and communicate the truth no matter how difficult it may be.

Popular narratives that must be refuted include the idea that we have a significant carbon budget remaining, that 2°C or even 1.5°C of warming above pre-industrial levels represent “safe limits”, or that climate change will be a problem only in other places or for future generations.

We must replace these narratives with the truth that dangerous climate change is already here and presents an existential threat for all of us. However, we must be careful not to encourage an unwarranted sense of hopelessness. We still have an opportunity to change course on climate, though urgent action is needed in all sectors of human activity, including transportation, industry, agriculture and land use. We can and must transform our society, and each of us can help lead the change process.

My forthcoming book, Transform Yourself with Climate Truth is a radical self-help book for people struggling to come to terms and cope with the climate emergency. Yes, the feelings are intense and overwhelming, but we can use those feelings as fuel to create rapid and dramatic change. They are part of the solution.

Affect phobia is often official. For example, Columbia University’s popular CRED Guide to Climate Communications contains a section, “Beware the Overuse of Emotional Appeals,” in which they caution presenters to avoid telling the whole truth about the climate crisis, as this would cause “emotional numbing.” So presenters are given strategies including choosing a specific “portfolio of risk” to communicate — such as the link between climate and disease — rather than the whole, frightening truth.

Affect phobia can also be found in almost any discussion within the gradualist climate movement about what to say or what to advocate. “Fear doesn’t work as a motivator” so we shouldn’t “make” people afraid as it might “turn them off.”

Focus on Turning People On

While it is accurate that climate truth overwhelms some people, the climate movement should be focused on turning people on — getting more people to enter emergency mode as activists. Further, some people will be “turned off” by climate truth temporarily, but will process it over time and then enter emergency mode later. With the truth, we give people the opportunity to face the facts and their feelings, and move forward productively. Without the truth, we deny them this chance.

Another critical reason for organizations and leaders to overcome affect phobia is to provide a safe space to discuss the crisis in the fellowship of others who understand. People who understand the climate crisis are often alienated, feeling that they must act “as if” things are OK in order to get along.

If you feel the urge to say, “But people can’t handle the truth,” question whether you may be reacting to your own anxiety and your own difficulty processing the climate crisis. Of course it’s difficult! Of course people will feel afraid, angry, and grief-stricken. Those are rational, healthy reactions to the surreal and nightmarish reality we find ourselves in. The climate movement should encourage people to acknowledge these feelings and learn to see them as a call to action.

We are Now in a Time of Tremendous Consequence

Incredibly, the choices we make now and in the near future matter a great deal to the future of humanity and all life on earth. It’s time to leave gradualism, business as usual, and normal mode behind until we have solved the climate problem. The time has come to enter emergency mode, both as a society and as individuals. The stakes could not be higher.