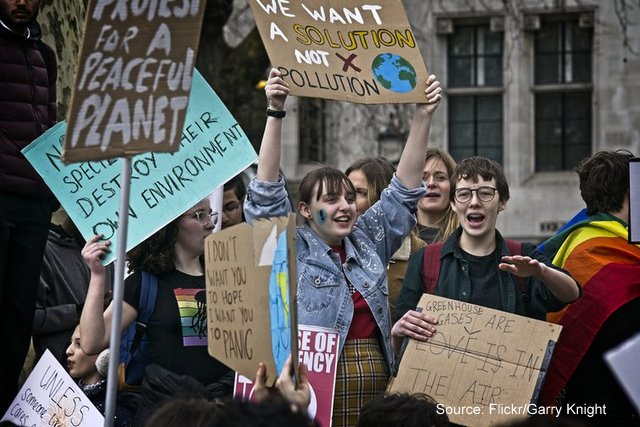 “Climate change, ecological degradation, migrating populations, conflict, pervasive inequalities, and predatory commercial practices threaten the health and future of children in every country,” says the WHO-Unicef-Lancet Report just published February 18, 2020. How can we help our children and grandchildren cope with this existential threat? What do we tell them about their uncertain future? And how do we explain that we’re failing to ensure they will have a liveable planet?

From Climate Angst to Climate Action

This post by Harriet Shugarman (ClimateMama) was first published in Open Democracy.

Our children are angry and frightened, and they are speaking out. Young people’s voices are rising; they are loud and demanding to be heard, and it’s working. Not only are they increasingly invited in, but they are being asked to sit at the table, to speak in the boardrooms of multinational corporations and in the halls of Congress, on the steps of the White House and in houses of worship around the world. This is something I haven’t witnessed in my decades of working on the climate crisis.

We know that this crisis can’t wait. It’s urgent, its real, and it’s happening in large part because of us and on our watch. The emperor is wearing no clothes – we see this, and our children are watching and seeing it too. Our children are demanding answers and cutting through the ‘noise’ that distracts us in ways that only children can – with truth and without guile.

Our children see our hypocrisy and our hesitations, and they are calling foul on our actions of ‘kicking the can down the road.’ Our shining ‘north star,’ the Paris Climate Agreement, is a promise at best, something to strive for but with no significant funding, enforcement mechanisms or implementation tools in place.

So how do we as parents, relatives, friends and mentors respond to these urgent cries? We must do so by telling the truth, showing our children through our actions and our own demands for change that we are serious, and that we stand with them in their efforts.

Our job is not only to listen to children, but to hear them, support them, work with them and include them wherever it makes sense, so that together we are doing everything in our power to slow down the climate emergency. That process of truth-telling and multi-generational collective action begins by acknowledging that this struggle is both personal and political.

Living with the Climate Emergency for the rest of our lives

Many of us are overwhelmed by the politics of the day, by our jobs and the need to put food on the table, and by managing our day to day lives and the activities of our children. Adding climate action to these responsibilities begins to tip many people over the cliff. But we need to get comfortable with the very uncomfortable fact that we will be living with the climate emergency for the rest of our lives.

This requires us to work diligently so that we can turn the disease of climate change into a chronic illness that might eventually be cured, rather than a cancer that kills us. For this we need more than personal change; we need corporate, governmental and societal change. We need to recognize that slowing down the crisis doesn’t rest on our shoulders alone, or the shoulders of our children.

Emphasis on individual responsibility alone is naïve, yet to me, the call for personal action as the primary solution to the climate crisis seems to be embedded in our lives, with sinister intent. The weight of the world is being placed squarely but unfairly on our shoulders, often by the very companies and government officials that should be taking on these massive problems directly and urgently themselves.

This isn’t new. In 1953 for example, the Keep America Beautiful (KAB) campaign was launched in the United States to encourage people to promote an ethic of ‘national cleanliness,’ based largely on taking personal responsibility for waste. ‘Reduce, Reuse and Recycle’ became the mantra, and one that is still repeated widely and loudly today.

Many of the KAB campaign’s original corporate founders were from the beverage and packaged goods industries: Philip Morris, PepsiCo, Anheuser- Busch and Coca Cola. Today the campaign continues, and its board of directors includes representatives from these same companies, as well as executives from Keurig, Dr. Pepper, McDonalds, Dow, Mars Wrigley, and the American Chemistry Council.

Think about this for a moment.

Beverage and packaging companies began to expand globally just as plastics entered the scene, causing costs to go down as manufacturers transitioned from recyclable and reusable glass and aluminum containers to cheap, single-use plastic ones. Marketing teams arrived at a creative and powerful way to keep costs low, which was to pass on the disposal and recycling of these items to the consumer. This put the onus on the consumer and made them think, not only that it’s their responsibility but also their patriotic and ethical duty to keep the country clean and tidy.

The cost of recovering, reusing, and recycling single-use plastic isn’t ordinarily factored into their price. This is how single-use items are kept cheap and accessible. For more than 60 years, the ad campaigns that encouraged us to “Keep America Beautiful” have been widely successful, but ‘buyer beware.’ You aren’t just getting hydration from that plastic water bottle; that package in your hand is now your responsibility. Find a place to recycle it or throw it in the garbage and feel guilty – it’s up to you.

As it now turns out, facilities to recycle single-use plastics are few and becoming fewer. In 2018, many of our normal recycling venues – plants that had been moved not only out of sight but across the oceans to China, Vietnam, and other Asian countries – stopped taking recyclables from Europe and the USA. They put up signs saying ‘closed for business,’ and suggested that we clean up our own messes. In a similar way and with similar ad campaigns, we have been convinced by fossil fuel companies that it’s okay if they produce goods and services that cause immense global pollution that affects our and our planet’s health, and that the onus to clean up their waste resides with us.

The use and burning of coal, oil and gas creates greenhouse gases and pollutes air and water; this is a fact. For a variety of reasons, however, the responsibility for addressing the damage these gases create, including the health impacts of hospital visits and the treatment of chronic diseases like asthma, certain forms of cancer and even changes to our DNA, are not apportioned – they are just accepted.

CO2 and methane are two of the most damaging greenhouse gases to our atmosphere. Yet we have allowed the air to be treated as if it were a giant open sewer, with no collection fees attached. New studies have linked exposure to various types of pollution and stress, including air pollution and extreme weather, to in-vitro damage, so even the place where we consider our children safest, a mother’s womb, is no longer safe.

Oil and gas companies have been working covertly behind the scenes and directly in front of us to keep these facts hidden. Campaigns that put guilt and responsibility onto our shoulders are everywhere: Eat less meat! Use less electricity! Drive less! Fly less! The burden of greenhouse gas accumulation has become ours to carry.

We must change this.

Putting the onus on individuals while hiding the fact that our planet is spinning out of control isn’t just the message of the oil and gas companies. Many government officials and lobby groups are also working against the renewable energy transition that is so essential. They want to maintain the status quo and slow progress on climate action for as long as they can.

Along the lines of the Keep America Beautiful campaign, the concept of shaming or blaming individuals for their personal habits is alive and well. We need to get beyond this story, without diminishing the notion that individuals have power and must use it. So let’s keep listening to and hearing our children, and increasingly, working with them too.

And while we show them through our actions that we are serious about addressing the climate emergency, we can and must demand corporate, governmental and societal changes that can be scaled-up and amplified. They need to see and press for this too. We must do this together, through organizing that crosses generations. Movements like Fridays for Future, Extinction Rebellion and Climate Reality show us what this looks like in concrete terms.

Will our planet give us the time to see these changes through – to elect leaders and support organizations that demand and implement these huge changes? Only time will tell, but one thing is clear: our children have given us a wake-up call and we should heed it.

Harriet Shugarman’s new book is How to talk to your kids about climate change, available for pre-order now.