Internal combustion engines are doomed to die off soon, writes Jim Harris. The rise of EVs, e-scooters and autonomous Ubers will spell the death of old automobiles sooner than you think. Traditional car companies are zombies. They’re dead but they just don’t know it yet.

This article was first published in Corporate Knights.

By 2022, electric vehicles (EVs) will become cheaper to buy than gas cars. EVs are already cheaper on operating cost and maintenance cost. The electricity to power EVs costs 80% less than the gas to power a traditional car and electric car maintenance costs are 80% lower. A typical gas powered car has 2,000 moving parts, while an EV has 20. With thousands of fewer parts and no oil changes, there’s very little maintenance required for EVs. Gas cars are dead. Here’s why. 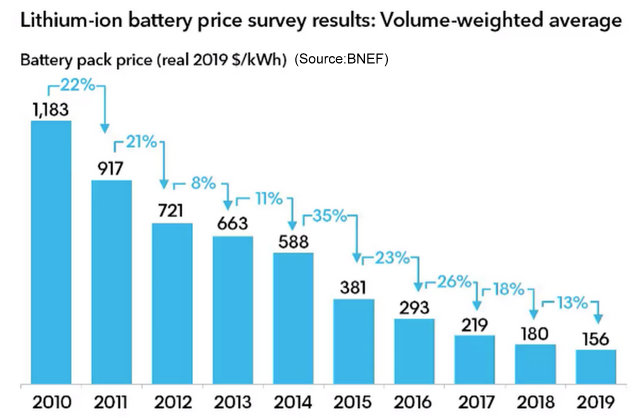 The largest cost of an EV has historically been the battery but battery prices are plummeting, having fallen by more than 90% since 2010, according to Bloomberg New Energy Finance (BNEF).

In 2017 BNEF predicted that by 2026 EVs would be cheaper to buy than the average gas car in North America.

But battery prices have been falling so fast, that BNEF now predicts that cross over will happen in 2022.

Catherine Wood, CEO of New York based investment manager ARK, forecasts that the cross over will happen in 2021, and that by 2025 inexpensive electric vehicles in the US will be up to $11,000 cheaper compared to a gas powered Toyota Camry.

Who is going to buy a traditional gas car when an EV is cheaper to buy, cheaper to run and cheaper to maintain? 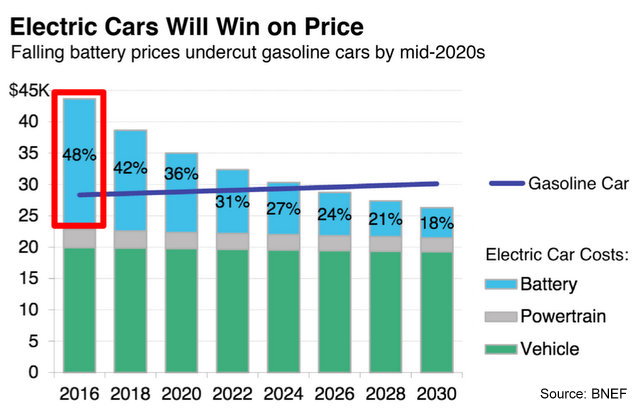 Rise of Mobility as a Service (MaaS)

Using Uber or Lyft is already cheaper than owning a car for 25% of Americans, especially for those living in dense urban areas and people traveling fewer than the average 13,000 miles per year (in Canada the average distance traveled is 15,200 kilometers).

The cost of personal travel was $1.70 per mile in 1871 by horse drawn carriage. The cost fell to 70 cents per mile by car and remained constant for 100 years when adjusted for inflation.

Once we have autonomous fleets (including autonomous Uber and Lyft cars), the cost will plummet to just 26 cents a mile. At that point who’s going to want to buy an expensive gas clunker when they can get anywhere they want to go for a third of the price? 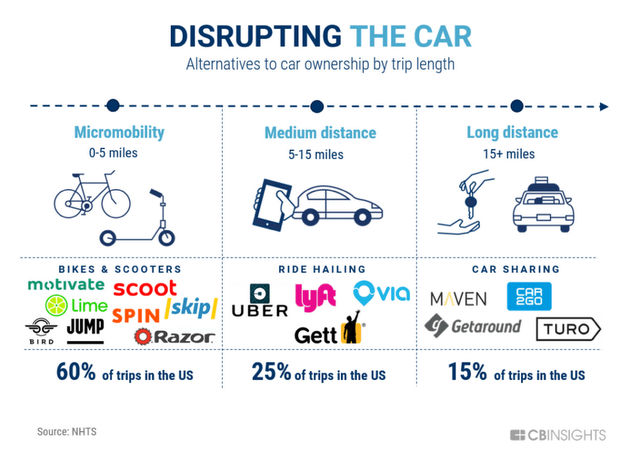 Finally micro mobility options will help to kill the traditional gas car. A staggering 60% of traditional car trips in the US are less than five miles. Bike and scooter sharing – which has taken off – provides far lower cost solutions for short trips.

In 2018, shared electric scooters firms Bird and Lime became the fastest ever US companies to reach billion dollar valuations – each achieving this milestone within a year of inception. Shared electric scooters provided 45.8% of all shared micro mobility trips in 2018, just one year after they emerged on the market. 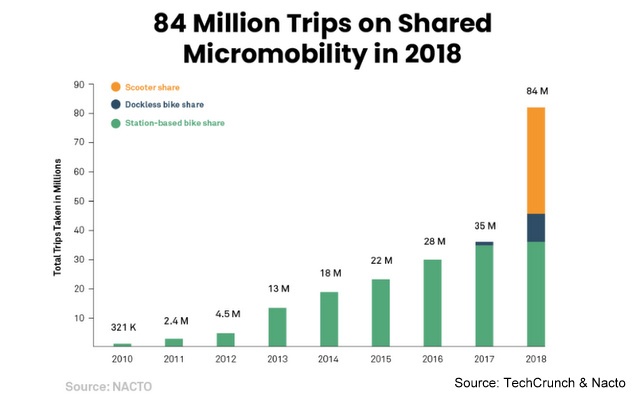 While ride sharing like Uber and Lyft are cheaper than owning a car for a portion of the population, the overall number of cars on U.S. roads is increasing. Traffic congestion in most U.S. cities is getting worse, not better. Further, some studies have found that public transit use has been decreasing in cities where Uber and Lyft are popular. Because of these counterintuitive consequences, traditional transportation experts may be tempted to dismiss or downplay how transformational the trends will be.

But some of those consequences may actually lead to further transformation: worsening traffic in cities will further drive explosive use of scooters in shared mobility for short trips.

Here’s a staggering stat that should tell you which way the wind is blowing: Tesla is valued at more than General Motors and Ford combined as of February 2019. To me, this highlights how profound the coming shift will be.

The death of the traditional gas-powered automobile will be driven by three trends: EVs, the rise of autonomous vehicles and mobility as a service and the rapid rise of micro mobility solutions like shared electric scooters.

This also spells the end for most traditional car companies. I predict that two of the world’s major car companies will go bankrupt in the next five years.

Jim Harris is the author of the Blindsided which focuses on disruptive innovation. It is published in 80 countries worldwide and is a #1 international bestseller. You can follow him on Twitter @JimHarris or email him at jim (at) jimharris.com.

Articles you may have missed…
The Good Disruption: When Transportation Goes Electric and Autonomous
To Decarbonize, We Need To Electrify Everything 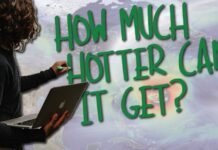 Glimmer of Climate Hope With a Mix of Cautious Optimism