Below 2C
Home Solutions Green Recovery If you think we’re getting a green recovery, think again 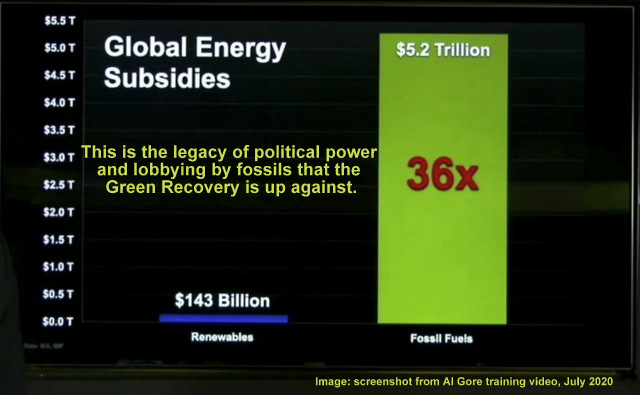 “Do not resuscitate,” wrote George Monbiot in an OpEd In The Guardian in April. “This crisis is a chance to rebuild our economy for the good of humanity. Let’s bail out the living world, not its destroyers.” But now, just a few months down the pandemic road, the hope of a green recovery has dimmed. The “green recovery” the public is calling for is under severe threat from the lobbying and political power of fossils.

Governments around the world have given handouts and regulatory relief as part of their pandemic recovery programs. Yale Environment 360 reports that “oil and gas giants, mining interests, and coal-fired power plants have all received financial and regulatory relief as governments around the world enact pandemic recovery plans. These moves threaten to create a dirty, high-carbon legacy that long outlasts the current crisis.”

In Canada the post-pandemic recovery plan is anything but green. The following article, first published in The Energy Mix reveals that our pandemic response sends $16 billion to fossils but a meagre $300 million to clean energy.

“A considerably larger amount of public money committed to supporting the economy and people of Canada through monetary and fiscal policies in response to the crisis may also benefit different elements of the energy sector,” the tracker states. “However, these values are not available from official legislation and statements and therefore are not included in the database.”

G20 throws US$151 billion in bailouts to fossils

The Canadian numbers are just one segment of a wider data summary, which “shows that at least US$151 billion of bailout cash has been spent or earmarked so far to support fossil fuels by the G20 group of large economies,” with only one-fifth of that total “conditional on environmental requirements such as reducing greenhouse gas emissions or cleaning up pollution,” The Guardian reports. “The G20 countries are directing about US$89 billion in stimulus spending to clean energy, despite most of those governments being publicly committed to the Paris agreement on climate change.”

The United States is lavishing $58 billion on fossil industries, compared to about $25 billion invested in clean energy, the research shows.

“At this point in history it’s clear that investing in fossil fuels is as lethal to global economies as it is to life on Earth,” tweeted Climate Action Network-Canada Executive Director Catherine Abreu. “Yet Canada has funnelled at least US$11.86 BILLION to fossils in recent months, while directing only $222.78 million to clean energy.”

At this point in history it’s clear that investing in fossil fuels is as lethal to global economies as it is to life on earth. Yet Canada has funnelled at least $11.86 BILLION to fossils in recent months, while directing only $222.78 million to clean energy. #cdnpoli https://t.co/CP0uXPozbh pic.twitter.com/Fw4ZWDo8BD

“The COVID-19 crisis and governments’ responses to it are intensifying the trends that existed before the pandemic struck,” concluded IISD Energy Policy Tracker lead Ivetta Gerasimchuk.

“National and subnational jurisdictions that heavily subsidized the production and consumption of fossil fuels in previous years have once again thrown lifelines to oil, gas, coal, and fossil fuel-powered electricity,” she said. “Meanwhile, economies that had already begun a transition to clean energy are now using stimulus and recovery packages to make this happen even faster.”

The Canadian figures show the federal government has been “completely captured by the oil industry,” Greenpeace Canada Senior Energy Strategist Keith Stewart told The Canadian Press. “They just don’t understand how the world is changing.”

CP cites an internal Natural Resources Canada briefing, obtained by Greenpeace through an access to information request, that showed the pandemic “wreaking havoc right across the energy sector, including fossil fuels and renewables,” as early as mid-April. “This will challenge Canada’s climate and energy transformation agendas,” stated the document prepared for Deputy Minister Christyne Tremblay.

“An attached presentation deck from Tremblay’s department outlines the impacts, including the collapse in oil prices, plummeting demand for both oil and electricity, and a cleantech industry being brought to its knees,” CP writes. Cleantech “is heavily dominated by start-up enterprises and those in the research and development phase that are heavily reliant on capital investments,” the news agency adds, and “the onset of the pandemic threw ice water on those investments, including from the oil and gas sector itself as its own revenues dried up.”

CP says Clean Energy Canada Executive Director Merran Smith called on the government “to ensure this sector’s survival by making sure it is a big part of the COVID-19 recovery stimulus programs. She said that doesn’t mean investing just in things that generate clean power, like wind and solar farms and technology, but also in promoting the use of cleaner power, such as by electrifying cars and public transportation.”

The Guardian notes that the tracker results were released ahead of a G20 finance ministers’ meeting this weekend where post-pandemic economic stimulus will be on the agenda. “Some of the spending on fossil fuels is likely to be designed to quickly stabilize hard-hit industries, preserving jobs and preventing a worse recession,” the UK-based paper states. “However, green campaigners are concerned that so much of the money is flowing to companies with no conditions to force them to take even basic measures to reduce greenhouse gas emissions or other pollution,” in spite of the “green strings” demanded by civil society groups and introduced by some countries.

“Economists and energy experts have already shown that green spending can [create] jobs and a higher return on investment in the short and longer term,” The Guardian notes. At the same time,  “as the data studied by Energy Policy Tracker is focused on the energy sector, the figures may not capture all of governments’ green spending. For instance, governments have been urged to spend on many ‘shovel-ready’ non-energy issues, such as cycle lanes, tree-planting, nature restoration, flood resilience, and enhanced broadband networks to help people work at home, all of which will also contribute to a green recovery.”

“We have some anecdotal evidence on these sectors which suggests that total green recovery numbers can be higher,” Gerasimchuk said. “Similarly, global environmentally harmful recovery numbers can be higher as there are measures leading to deforestation, land degradation, overfishing, etc. A lot of government support policies remain unquantified.”

“Its mere existence is a positive first step; but is the deal really as good as they want us to believe?” the Observatory asks. “The fingerprints of industry, and in particular the fossil fuel industry, can be seen all over the EGD. Carbon trading will continue to allow big polluters to slow the transition, emissions reductions targets are too modest and too slow, fossil gas is kept as a transitional fuel, and public money will finance industry ‘false solutions’. The fossil fuel lobby is taking advantage of its privileged access to policy-makers, as well as the corona-crisis, to secure these gains.

Related articles…
Pointing Out The Glaringly Obvious: Oil is Dead
Breaking News: The Coronavirus Will Not Save The Climate
The Madness Continues: Fossil Fuel Subsidies Equal $1,650 Per Canadian