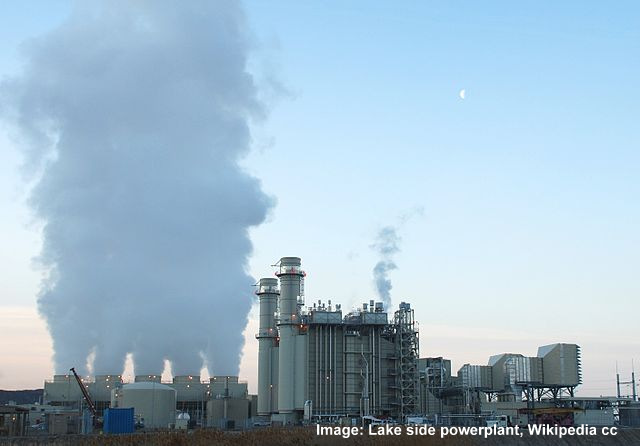 One popular myth about natural gas is that it’s a bridge to a low-carbon future. But it’s really a bridge to nowhere. Fossil fuels are the cause of rising emissions in Canada and globally. And natural gas is a fossil fuel. It is not climate friendly. End of story.

A reasonable chance of stabilizing global temperatures requires greenhouse gas emissions halved by 2030.  By then, electricity in Canada could easily be 100% clean.  Canada would become the largest economy in the world to have achieved a 100% clean grid.

Electricity is already 82% clean on average nationwide.  The key to achieving 100% is engagement of sufficient generation that can be controlled to meet variations in demand.  This can be done cheaper than storage, or new developments like geothermal, without emissions from gas plants, using existing hydro reservoirs working with variable sources like wind.  We need to develop more storage and new non-emitting load following sources, but we’d be foolish not to also optimize use of existing hydro. 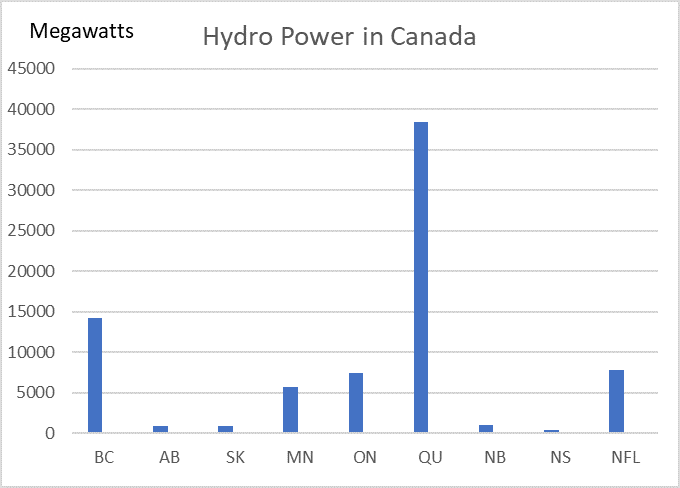 Canada has lots.  We have more than the Americans, with a tenth of their economy.  As shown on this chart (by the author from Wikipedia, Hydroelectricity in Canada, 2018), we have access to hydro from coast to coast, though not evenly.   Would it be so hard for more hydro to flow from BC to Alberta, from Manitoba to Saskatchewan, from Quebec to Ontario and from Newfoundland to the Maritimes?  No.  But can we change negative attitudes within what would be the receiving provinces: Alberta, Saskatchewan, Ontario and Nova Scotia primarily?  We must. These are the provinces who evidently think it’s perfectly OK to burn vastly increased volumes of gas, befouling local air with nitrogen dioxide and making it very difficult for Canada to meet its greenhouse gas reduction obligations and goals.

This travesty warrants the grown-ups stepping in with higher carbon pricing and federal initiatives to enable interprovincial transmission.  A persuasive case for the latter is outlined in the recent report by Corporate Knights on Building Back Better with a bold green recovery (more on that later), as it was in the previously referenced paper by Natural Resources Canada.

The Dash to Natural Gas

“Natural gas is the enabler of renewable energy and provides the flexibility required to ensure a reliable electricity system,” said Ken Hartwick, OPG President and CEO, after spending about $3 billion buying four gas plants from TC Energy and ATCO.

This is a problematic assertion for anyone who has been paying attention to the growing climate crisis.  As already noted, scientists recommend greenhouse gas emissions reduced by at least 50% by 2030.  Are we to ignore the scientists again?  Have we learnt nothing from COVID 19?

The fatal flaw of the dash to gas is that it still produces greenhouse gases.  A CO2 molecule from a gas plant performs the same way as one from a coal plant.  The counter-argument that “gas has about half the emissions of coal” ignores methane leaks and the sensible policy, as argued by Mark Jaccard, in the Citizens Guide to Climate Success (p248-251), and what should be just common sense, that electricity generation should be the first sector to be fully decarbonized.  Other sectors, transportation, buildings, industry, will obviously take longer because they involve millions of decision-makers, much more new investment, and emission reductions in these sectors can be maximized using 100% clean electricity.

But there is a problem.  Among the renewables, wind, sun and water, it’s only water that electricity system operators can control to meet variations in demand, which must be achieved in every instant to maintain system stability.  Lucky Canadians!  We have water in abundance, and it’s getting wetter all the time.  Let’s exploit our comparative advantage to the fullest.  That may require revision of archaic provincial attitudes about their energy fiefdoms, aka “I’m the Boss” and “Not Invented Here”.

Another attitude that needs adjustment is obeisance to a market system that is failing to give us clean energy.  Carbon taxes were supposed to bridge that divide.  To paraphrase the Prime Minister, “polluters will no longer be able to pollute for free in Canada.”  But they can, and they do, because of the Output-Based Pricing System (OBPS) that applies to big emitters requiring they pay carbon tax on only a small fraction of their total emissions.

Gas is cheap and contracts with gas plants are structured such that all the fixed costs are committed whether the plant runs or not.  The only incremental cost of running them is the fuel (plus the carbon tax, if it were effective).  And Ontario already has enough existing gas plants to push out a projected 220 million tonnes of emissions in the current planning period, rivalling large oil sands mines. 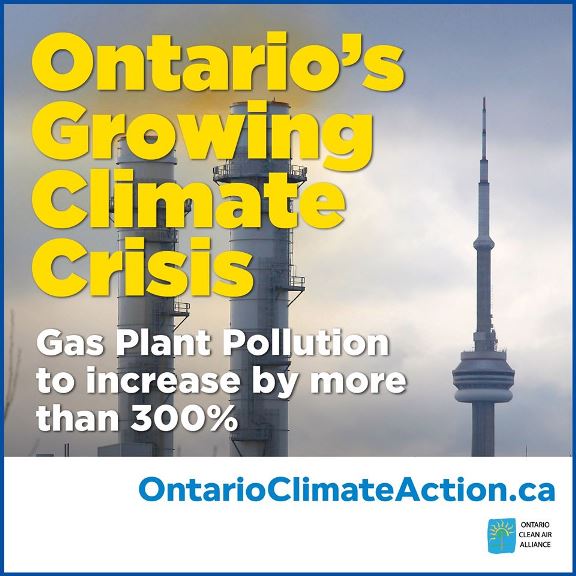 Environmental NGO’s argued against inclusion of electricity generation in the OBPS.   Yet Environment Canada maintained the regulations “will help renewable electricity, such as wind and solar, compete even more effectively against natural gas when utilities are making decisions about what kind of new power generation to choose.”   Well, that’s not happening to any meaningful extent. Look at the projected data: coal plants are been converted to gas plants and there are even four large new gas plants in various stages of development in Alberta.  But there is hope. The same Environment Canada posting stated, “these final regulations are subject to review beginning in 2020, and again in 2022, and could be adjusted to ensure a well-functioning OBPS system.”

Since experience has confirmed the OBPS does nothing to curb pollution from gas plants, the mid-program review promised for 2020 should be used to make electricity generation subject to the full fuel charge.  This might start with tweaking the federal OBPS (which covers Ontario and Saskatchewan), then move on to tackle those provinces currently not covered under the federal carbon pricing regulations for big emitters, i.e. Alberta, especially, and as a lesser priority, Nova Scotia. 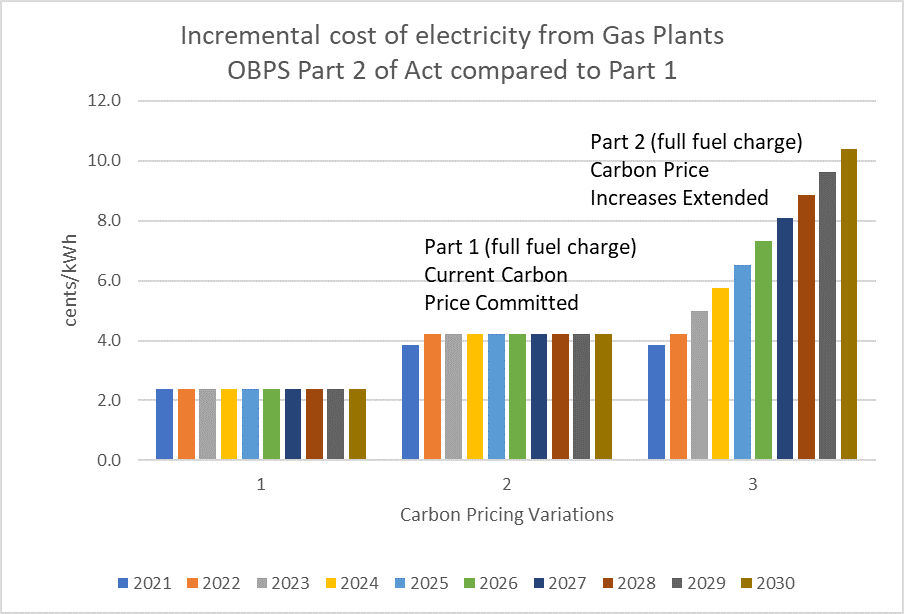 This chart (by the author, mostly from data in the Annual Planning Outlook, January 2020 of the Ontario Independent Electricity System Operator) illustrates why the OBPS is not working and what it will take to make the carbon price effective in the electricity sector.   The ten columns on the left represent the current running cost of gas plants (fuel + carbon tax).  The carbon tax under the OBPS is practically zero.  The cost of competing renewable electricity is about in the range of 3.8 to 7.3 cents/kWh.

Mentally superimposing this band on the chart suggests the current OBPS will never allow renewables to be competitive with the running cost of gas (so long as it is subsidized by allowing it to dump heat trapping gases into our air, for no charge).  Furthermore, the middle and right-hand columns illustrate that even making electricity pay the full fuel charge will probably not be sufficient to strongly decarbonize, unless the carbon price is also raised beyond 2022.  This conclusion is in line with that of the previously referenced study by Natural Resources Canada.

However, if the carbon price is escalated past 2022 by $20/tonne/year, as advocated by Citizens’ Climate Lobby, electricity planners would be forced to seriously look for clean alternatives to gas.  Part of the solution would surely be existing hydroelectric reservoirs in neighbouring provinces.

As previously mentioned, a recent report for Corporate Knights, entitled Building Back Better with a Bold Green Recovery by Ralph Torrie, Celine Bak and Toby Heaps includes a section on Greening the Grid.  It proposes five indicative projects, totalling $8.3 billion, to interconnect hydro-rich provinces to the others, including a 2,000-Megawatt HVDC line direct from Quebec to (I’m guessing) Cherrywood Transformer Station, effectively replacing Pickering Nuclear.

It suggests these projects be financed by the private sector motivated by incentives from the federal government via the Canadian Infrastructure Bank (CIB), as part of its COVID recovery program.

This report similarly envisages the CIB leveraging private investment in storage.  It suggests that loosening the transmission and storage constraints will induce private investment of $95 billion in non-emitting electricity generation.  Effective carbon pricing would help drive that.  It estimates, by 2030, a reduction of 75 million tonnes/year, over 900,000 job-years and $284 billion of Gross Value Added from its greening the grid initiative only.  The total projected greenhouse gas reduction, from all initiatives in the Bold Green Plan, would be more than sufficient to meet Canada’s 2030 reduction goal of 30%, putting 50% within reach (perhaps by doing something about the oil-sands).

The government should heed the advice from the Corporate Knights and Citizens’ Climate Lobby.  Then, in the not too distant future, our friends south of the border will have their own carbon tax, and will be desperate to buy clean power at multiple points from coast to coast, which could be arranged with suitable profit to local ratepayers and even greater global GHG reduction.

References (links were provided in the text):