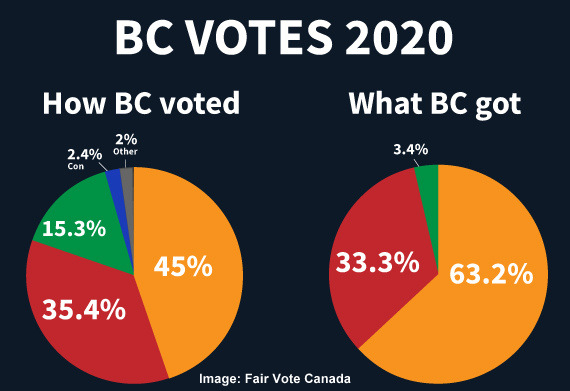 According to Fair Vote Canada, a  September 2020 Leger poll showed that 95% of British Columbians want an electoral system that encourages parties to work together more in the public interest. And a full 87% believe that improving our democracy is key to achieving long-term progress on key issues. And the most critical issue of our times is the climate crisis.

However, the first-past-the-post election of a few days ago in BC has delivered a government which is the opposite of preferences indicated by the Leger Poll.

The BC election has once again shown how dysfunctional and misleading our electoral system is. The NDP received 3 times as many votes (45%) as the Greens (15%), but 18 times as many seats (55 vs 3). They got less than half the votes and yet the media insist on claiming this is a decisive majority. “Now, parties representing 55% of the voters will be shut out of decision-making for the next four years,” says Fair Vote Canada board member Gisela Ruckert.

Unfortunately, as the climate crisis grows increasingly more threatening, Premier Horgan will now claim that, with his 45% mandate, citizens support his planet-destroying policies: the ill-fated Site C dam, the methane-emitting fracking and LNG disaster, support of pipelines over indigenous rights, and oil and gas subsidies that are higher than those of the Liberals’ before them.

We both supported the NDP federally and provincially for decades, but no longer. Not only have we been disappointed by the Horgan government for its failure to truly battle the climate crisis, but Rachel Notley’s NDP Alberta government was also dangerously pro-fossil-fuel.

Sadly, the federal NDP is also downplaying the climate crisis while holding the balance of power — climate action wasn’t even on their demand list for the Speech from the Throne. They are now wasting an excellent opportunity to push the Liberals harder on a green recovery.

Meanwhile, the federal Green Party, the only party consistently serious about the climate crisis, received 6.5% of the popular vote but only 3 seats. The federal Liberals with 5 times as many votes (33%) got 52 times as many seats (157 vs 3) in the last federal election.

It certainly seems that, until we have a more representative electoral system, Canadians who realize the need for serious climate action now will continue to be gravely underrepresented.