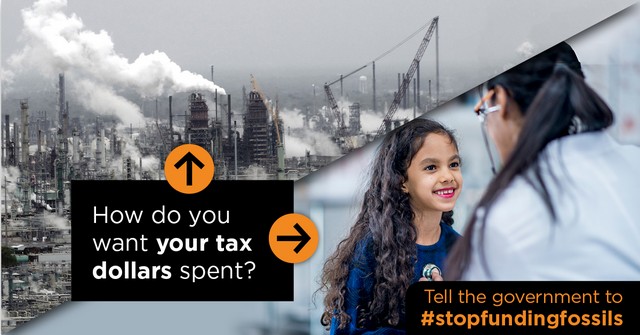 Canada’s massive fossil fuel subsidies give Canadians the dubious distinction of being the G7 leader in handouts to Big Oil. Canadians need to know every woman, man, and child in Canada  “donates” around $100 ($77 USD) to profitable, and often foreign-owned, oil and gas companies. And BC residents need to know that their fossil fuel subsidy of $1billion per year is double the Canadian average — over $200 per person ( $1,000,000,000/4,862,610 residents).

The following piece is a Press Release issued by the BC Citizens’ Climate Lobby and the Canadian Association of Physicians for the Environment (CAPE), published in Below2°C at their request.

BC Wastes $1 Billion A Year In Fossil Fuel Subsidies

It’s money that we can’t afford to lose–and money that is slowing our transition to a clean-energy economy. British Columbians forgo over $1 billion annually in subsidies that promote the development and use of fossil fuels according to data compiled by Citizens’ Climate Lobby (CCL) BC, a non-profit, non-partisan group focused on climate action. Royalty credits to incentivize development of fracked gas make up the largest single category of subsidies.

The Canadian Association of Physicians for the Environment (CAPE) has taken a strong position against fracking and LNG in BC on the basis of its local and global health implications. “After two consecutive years of record-breaking forest fires in BC, and a summer of deadly heat waves in Quebec, Canadians are in desperate need of climate action,” said Dr. Melissa Lem, CAPE board member and BC resident. Regarding the government’s recent announcement about LNG Canada’s $40 billion new Kitimat megaproject, she said, “This unprecedented and ill-advised investment in fossil fuel infrastructure is a dangerous step in the wrong direction.”

CAPE board members Drs. Warren Bell and Larry Barzelai travelled across northern BC this fall to learn about the region’s energy industry and dialogue with local residents about the health effects of fracking. Doctors in the northeast report increased incidences of chronic lung disease and cancer in their patients. People in this region can’t drink water from their wells, can’t hunt because the animals are too diseased, and can’t eat the fish in their lakes because of their high mercury content. Studies in other jurisdictions have demonstrated increased incidences of stillbirths, birth defects and hospitalization of people who live near fracking wells.

“What Larry and I saw was farmland inundated with fracking wells, flare towers, processing plants and pipelines. Site C dam is being rushed to completion to power the LNG industry, and massive preparations for building the multi-billion-dollar LNG Canada plant in Kitimat are underway because the fossil fuel sector is riding high on our taxpayers’ money,” said Dr. Bell. “Meanwhile, the Intergovernmental Panel on Climate Change (IPCC) gives humanity little over a decade to avoid catastrophic global warming — fuelled in large part by burning fossil fuels. Subsidies to this industry are a form of political insanity.”

Just the Tip of the Iceberg

The over $1 billion in annual subsidies includes tax and royalty breaks as well as tax exemptions and rebates. This $1 billion does not include the recent announcement of $5.3 billion in subsidies reported by The Narwhal for LNG Canada’s new Kitimat megaproject. Nor does it include higher health-care costs that result from the impact that fossil fuels are inflicting on the water we drink, the air we breathe and the disastrous effects on our climate in general.

“Continuing to give tax breaks for production and consumption of fossil fuels does not make sense in the midst of a climate crisis. The annual $1 billion in subsidies in BC almost completely offsets the $1.2 billion in carbon tax revenues, and hugely outweighs the few million spent on clean energy,” said Judy O’Leary from Citizens’ Climate Lobby BC. “This revenue could be used to help fund our much needed transition to a clean-energy economy.”

In deciding what constitutes a subsidy, CCL used definitions consistent with reputable international and Canadian organizations including: International Monetary Fund (IMF), International Institute of Sustainable Development, Overseas Development Institute, World Trade Organization (WTO) and Auditor General of Canada. These organizations include tax and royalty breaks as subsidies. As a result of these royalty and tax breaks for fossil fuel companies, the average taxpayer has to pay more in taxes to offset lost revenue

Since 2010, Citizens’ Climate Lobby has called for the phase-out of all fossil fuel subsidies. The Canadian Association of Physicians for the Environment has repeatedly expressed grave concerns about local harms caused by fossil fuel extraction and processing, and about the health impacts of climate change. The influential British medical journal, The Lancet, states that “Climate change is the biggest global health threat of the 21st century.” The World Health Organization has stated “Between 2030 and 2050, climate change is expected to cause approximately 250,000 additional deaths per year, from malnutrition, malaise, diarrhea and heat stress.”