Below 2C
Home Climate Carbon Emissions What On Earth Is Blue Carbon? 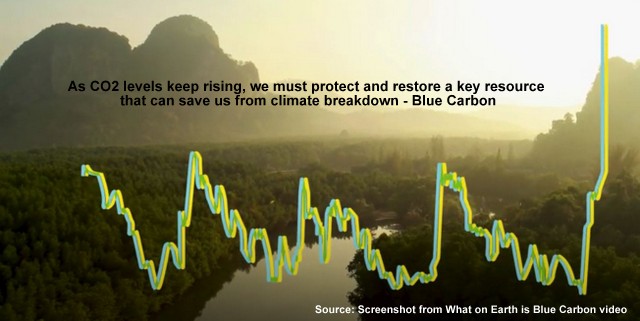 Have you ever heard of blue carbon? According to the NOAA (National Oceanic and Atmospheric Administration) “blue carbon is simply the term for carbon captured by the world’s ocean and coastal ecosystems.” It is stored and sequestered in the soil and plants of coastal habitats such as mangrove forests, seagrass meadows or tidal soft marshes.

This post is sourced from an article — Blue Carbon: a natural climate change solution — published in The Narwhal. Read the full piece here. 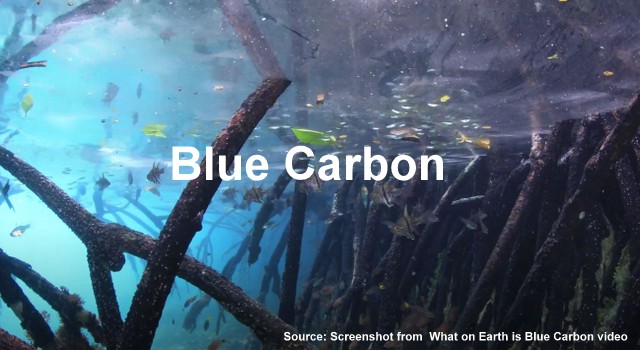 Coastal ecosystems like salt marshes sequester millions of tonnes of carbon, but have been whittled away over the decades. Now Canadian scientists are looking to re-flood marshes and store carbon in an effort to mitigate the impacts of sea-level rise. And with this, seaweed is having its moment in the spotlight.

Over her years of researching the Bay of Fundy, researcher and McGill University professor Gail Chmura found the bay’s salt marshes contain more than 14.2 million tonnes of organic carbon, which it has been accumulating for 3,000 years. That’s equivalent to emissions from over 106 million barrels of oil being consumed.

The carbon stored in ocean and coastal ecosystems like marshes, seagrasses and mangroves was dubbed “blue carbon” by environmental non-governmental organizations in 2009, and Chmura has gained a reputation as a blue carbon expert.

The ocean’s vegetated habitats (like mangroves and salt marshes) cover less than two per cent of the ocean floor, but they hold over half of the carbon stored in ocean sediments. A 2009 report, Blue Carbon: The Role of Healthy Oceans in Binding Carbon, estimated preserving and recovering these ecosystems could offset three to seven per cent of global fossil fuel emissions over the course of two decades.

Instead, like so many ecosystems The Narwhal has explored in the Carbon Cache series, coastal ecosystems have continued to be desecrated over time. Wetlands are threatened by rising sea levels, warmer oceans, erosion and pollution. The Blue Carbon Initiative estimates 340,000 to 980,000 hectares of blue carbon ecosystems are destroyed each year, releasing their stored carbon into the atmosphere.

“The bigger picture of blue carbon is one of coastal habitat conservation. When these systems are damaged, an enormous amount of carbon is emitted back into the atmosphere, where it can then contribute to climate change.” — NOAA

‘You can have your marsh and eat it too’

Earlier this month, the first blue carbon standard was introduced into the global carbon market by Verra, a non-profit organization based in Washington, D.C., that issues verified carbon credits. This means projects restoring or conserving blue carbon can begin accessing carbon markets.

One day soon, Chmura said, perhaps farmers could raise sheep on salt marshes and earn income from selling meat in addition to carbon credits, once they can prove how much carbon is still being sequestered. Chmura believes there are opportunities for ecotourism, as well.

“You can have your marsh and eat it too,” she said.

On a national scale, the federal government is also in the midst of developing its own carbon offset standard, which will set the parameters for a variety of carbon credits.

In the face of climate change, restoring salt marshes may in fact be one of the best ways to protect agricultural land by creating a buffer zone. Many of the Bay of Fundy’s salt marshes disappeared due to dikes being built so the nutrient-rich soil could be used for agriculture. But as sea level rises and dikes erode, those lands are now at high risk of flooding.

Re-introducing these marshes creates a buffer that can absorb water, decrease wave intensity and provide more space between the dike and land that’s being used for other purposes like agriculture.

Bill Collins, Chairman of Cascadia Seaweed says seaweed is the food of the future, and the only way to possibly feed people as demand for food rises in the coming decades. Some estimate the world needs to increase food production by 60 to 100 per cent by 2050 to feed a growing population.

Seaweed is definitely storing carbon, and it may mitigate greenhouse gas emissions in another surprising way: by reducing methane in cow burps.

Scientists have found that adding small amounts of asparagopsis taxiformis, a type of red seaweed, to cow feed can reduce the animals’ methane emissions by 50 to 90 per cent.

According to Agriculture and Agri-Food Canada, in one year a dairy cow can produce the same amount of greenhouse gas emissions as a mid-sized vehicle driven for 20,000 kilometres.

Marine vegetation can sequester up to 20 times more carbon than terrestrial vegetation. Macroalgae could sequester almost 200 million tonnes of carbon dioxide globally every year, equivalent to taking over 55 million cars off the road.

It sounds ambitious, but according to one estimate, farming seaweed in just four per cent of federal waters on the California coast could neutralize emissions from the state’s entire agricultural industry.

Collins has high hopes that seaweed will have its moment, and one day the macroalgae, instead of being thought of as a slimy nuisance, will be recognized as a delicious snack — as well as a carbon sink and cow burp kryptonite.