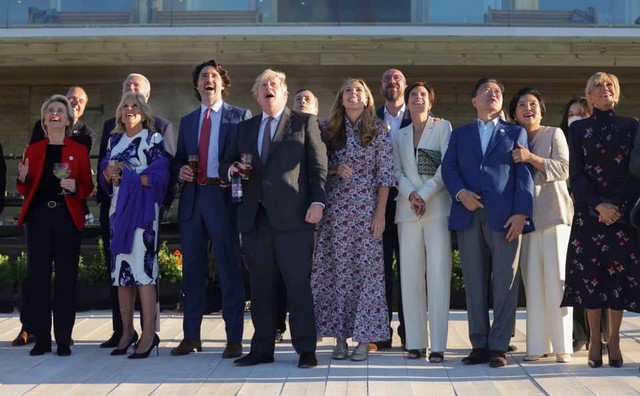 “Never in the history of the G7 has there been a bigger gap between their actions and the needs of the world. In the face of these challenges the G7 have chosen to cook the books on vaccines and continue to cook the planet,” writes Jon Queally of Common Dreams.” On climate, the G7 showed once again it’s a colossal failure.

The 2021 G7 summit which just ended achieved very little if anything. It was expected to be the last opportunity to “forge a global consensus on the climate crisis” according to The Guardian. That did not happen.

“Boris Johnson badly needed a successful G7 deal on climate finance to pave the way for vital UN climate talks, called COP26, to be held in Glasgow this November. Climate finance is provided by rich countries to developing nations, to help them cut greenhouse gas emissions and cope with the impacts of climate breakdown, and was supposed to reach $100 billion a year by 2020, but has fallen far short.”

“The G7 summit ended with rich nations reaffirming their goal to limit global heating to 1.5 C…the prime minister was left to re-announce previously allocated cash, in the form of a £500-million blue planet fund for marine conservation, already set out last year.” You can read the full article here.

Meanwhile Oil Change International (OCI) has called out G7 leaders for missing an opportunity to raise climate ambition so essential for speeding up climate action. “The leaders failed to follow the advice of the International Energy Agency and call for an end to fossil fuel finance of all sorts, including oil and gas as well as coal,” says OCI in its press release.

Oil Change International said “The G7 has failed to commit to what leading economists, energy analysts, and global civil society have shown is required: an end to public finance for all fossil fuels. Our climate cannot afford further delay, and the failure of the G7 to heed these demands means more people impacted by the ravages of our climate chaos.”

The G7 Communique includes a six-point agenda for global action:

Paragraphs 37 to 43 of the full communique outline the G7 consensus on climate and the environment. Paragraph 39 begins with “To be credible, ambitions need to be supported by tangible actions in all sectors of our economies and societies.” And therein lies the problem. The document contains all the right words but is seriously lacking a concrete pathway to build momentum leading up to COP26.

Taking to Twitter after the summit, Greta Thunberg chastised G7 leaders for their arrogance and insensitivity—enjoying a fancy dinner while watching air-polluting aerobatics in the sky—while millions are out of work because of COVID and millions are starving on a drought-ravaged planet not to mention the explosive rise of CO² emissions that will come with a post-pandemic recovery.

The climate and ecological crisis is rapidly escalating. G7 spends fantasy amounts on fossil fuels as CO2 emissions are forecast for 2nd biggest annual rise ever.

This calls for steak-and-lobster-BBQ-celebration while jet planes perform aerobatics in the sky above the G7 resort! pic.twitter.com/iAKEit9aCB

In September of 2019, while in Montreal, Greta blasted Justin Trudeau for “not doing enough” during her rally speech. Trudeau’s response was “I’m listening…young people are counting on us to act.”

Prime Minister Trudeau is doing neither: he’s not listening to the science and he has become a climate loser.

ICYMI:
One Word That Describes G7 Overall Climate Performance: Mediocre
There’s an Avalanche of Climate Bullshit Coming at Us