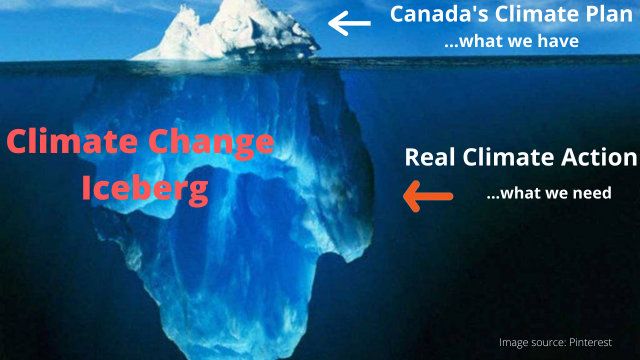 A new Natural Resources Canada report, Canada in a Changing Climate: National Issues Report, looks at the costs of climate change. In 2020, extreme weather caused $2.4 billion in damages across Canada, up from an average of $400 million per year during the 1980s according to the Financial Post. And this is just the tip of the climate iceberg.

“The National Issues Report is a stark reminder that Canadians are already feeling the effects of climate change through more extreme weather events like wildfires, floods and droughts,” says Jonathan Wilkinson, Minister of the Environment and Climate Change.

(This article by Dr. Elaine Blacklock was previously published on her website and her local Sudbury Star newspaper.)

On April 15, 1912, the Titanic hit an iceberg and sunk. It wasn’t the exquisite blue-white peak of ice we see in photographs that doomed the supposedly unsinkable ship to a watery fate. The real danger in icebergs lurks below the surface, unknown and unmeasurable. Or at least that’s how things were before radar was invented.

We who live in 2021 are faced with a metaphoric iceberg of our own, and one of gargantuan proportions. This iceberg (yes, it’s a melting one) is a human creation called climate change, and we’re steaming straight towards it at full speed. We’ve studied our iceberg extensively, and we’ve made progress understanding the risks we face. We already know enough to compel any sensible ship’s captain to reverse course and make haste for a safe port. But such a manoeuvre would require courage, and a sense of urgency we still seem to lack.

Mostly, we’ve been busy scrutinizing the tip of our iceberg. And so, when the Canadian Institute for Climate Choices recently attempted to calculate the health costs we’re going to face as a result of climate change, they encountered some significant limitations. To date, most research has focused on the kinds of dangers we’re familiar with, on the impacts and risks that lend themselves to measuring and modelling. But other potential perils lurk beneath the surface.

The institute’s report came out on June 2, just in time for this past week’s heat wave and spate of air quality alerts. As it happens, the well-studied tip of the climate iceberg features health threats like heat waves, air pollution in the form of ozone at ground level (where we generally do our breathing) and, of course Lyme disease, which migrates further north with each passing year.

Heat and ground level ozone are killers and they often keep company. Ozone is produced when sunlight ignites chemical reactions between air pollutants like nitrogen oxides and volatile organic compounds (VOCs), much of which arise from burning fossil fuels. Heat speeds up the process.

Now … assuming it’s actually possible to put a monetary value on a human life, the report calculates that deaths from ground level ozone could cost us $50 billion-100 billion by 2050, depending on whether we turn the emissions ship around immediately, or keep barreling on at top speed. Throw in another $3-4 billion for heat-related deaths, and $7-15 billion for the loss of productivity that accompanies excess heat, and you have what we can predict with confidence.

What about the unknowns?

What’s even more concerning, however, are the unknowns. After all, some 90 percent of an iceberg hides underwater, its dangers yet to be discovered, its costs yet to be reckoned. How, for example, will an unstable climate affect the economy, and our capacity to even provide health care? How will the ensuing destruction of much-loved ecosystems and rising species extinction rates affect our mental health, which is already in rough shape due to COVID?

And whose health are we concerned with here anyway? Whose lives and deaths are we presuming to calculate? Probably not those of the rich and reasonably well-off. They will have access to air conditioners and the option of staying indoors when it’s too hot or smoggy outside. As always, it will boil down to the usual risk factors: things like income, age, race, education, working conditions, internet access, and so on. And on.

So what does the institute report recommend? It suggests we promptly change course and hightail it to new destination. Unfortunately, we’ve left it rather late. Big boats can’t turn around on a dime; we’re not going to escape giving the iceberg at least a serious glancing blow. Clearly it behooves us to make sure that everyone on board has a life preserver, and access to a lifeboat. Especially the most vulnerable among us.

ICYMI:
Economic Impact from Climate Crisis Like Two Pandemics Per Year
Humans Can’t Be Healthy On A Sick Planet