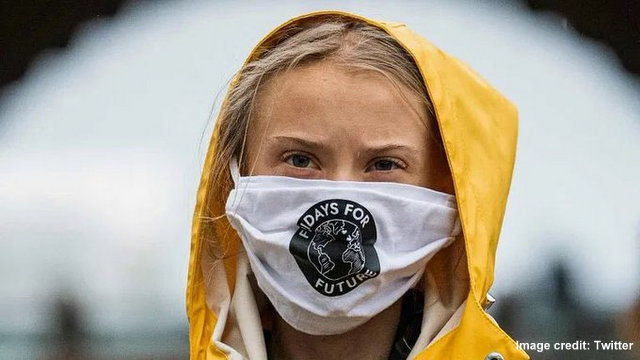 “Let’s be clear—what you are doing is not about climate action or responding to an emergency. It never was,” said Greta Thunberg during her address at the recent Austrian World Summit. Most will agree that world leaders are only pretending to be climate leaders, only pretending to take the climate threat seriously.

Greta rips into the the climate theatrics of world leaders taking special aim at those from rich countries.

Pretending to be Climate Leaders

(excerpts from Greta Thunberg speech at the Austrian World Summit 2021)

Pretending to take responsibility. Acting as saviors as you tried to convince us that things are being taken care of, meanwhile the gap between your rhetoric and reality keeps growing wider and wider. And since the level of awareness is so low you almost get away with it.

Pretending to take science seriously by saying “science is back” while holding climate summits without even inviting a single climate scientist as speaker. Pretending to wage war against fossil fuels while opening up brand new coal-mines, oilfields and pipelines. You don’t only continue business as usual as before, in many cases you are even speeding and scaling up the process.

“Nature and physics will not fall For it…young people all over this planet are no longer falling for your lies.” Greta Thunberg

Pretending to have the most ambitious climate policies while granting new oil licenses, exploring future oilfields. Bragging about your so-called ambitious climate commitments, which if you look holistically are vastly insufficient, and then get caught not even trying to reach those targets.

Pretending to care about nature and biodiversity while the world is cutting down a forest area the size of a football field every second. Pretending to be a climate leader while locking in a future common agricultural policy that will basically make the Paris Agreement impossible to reach.

Pretending that you will “build back better” after the pandemic even though astronomical sums of money have already been locked in, and not in green projects, whatever green means. The G7, as an example, is spending billions more on fossil fuels and fossil fuel infrastructure than on clean energy.

Nature and physics will not fall for it

But let’s be clear — what you are doing is not about climate action or responding to an emergency. It never was. This is communication tactics disguised as politics. You — especially leaders from high income nations — are pretending to change and listen to the young people while you continue pretty much exactly like before.

Meanwhile the people in power call themselves “climate leaders” as they open up new oilfields, pipelines and coal power plants – granting new oil licenses exploring future oil drilling sites.
This is the world they are leaving for us. https://t.co/4hQ8nm11Fd

More from Greta Thunberg:
I Want You To Listen To The Scientists
You Are Failing Us…You Have Stolen My Dreams and my Childhood
Sorry This Is Inconvenient For You