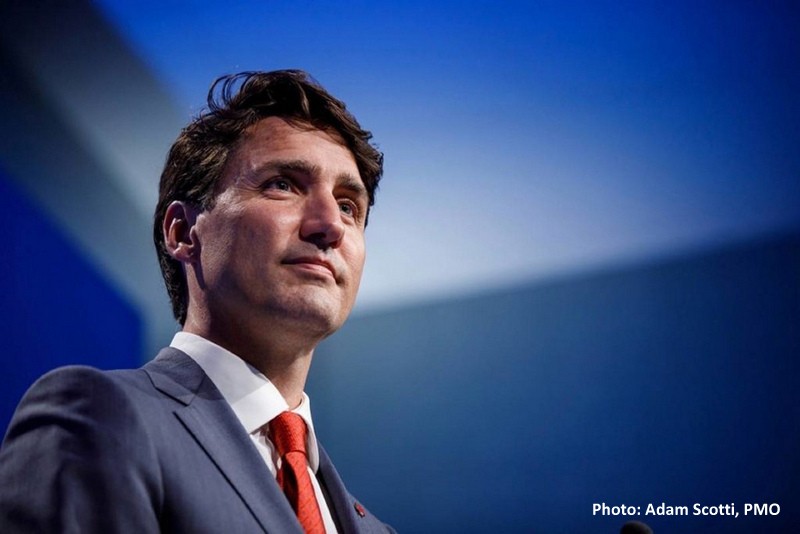 The act of choosing our politicians while the world is burning around us is a deeply profound act. Canadians have just chosen their next government during an election in which the climate crisis rose to the top of the political agenda. There is a growing realization, even an escalating sense of urgency in many, that Canada needs more ambitious climate policies. We must move to emergency mode to tackle climate change.

Canadian voters have returned the Liberals to office with another minority and a mandate to enact a suite of environmental and climate policies outlined in the party’s platform.

Climate change was top of mind for many Canadians during the campaign, following a summer of deadly wildfires and a suffocating heat dome in the West and destructive drought in the Prairie provinces.

What can we expect on the energy and environment files under another Liberal government? Let’s start with Canada’s sexiest emissions fix: nature-based climate solutions.

Canada has a huge role to play in addressing the climate emergency — simply by conserving and restoring forests, grasslands and wetlands that naturally store carbon.

The Liberal election platform committed to protecting 25 per cent of Canada’s land and oceans for nature by 2025 and 30 per cent by 2030, in keeping with promises made by other countries such as the U.S. and the U.K.

In June, the Canadian Parks and Wilderness Society released a report card on conservation efforts which gave Ottawa an A- on land protection and a B+ on ocean protection, while assigning failing grades to many of the provinces. The report card speaks to the challenges the new government will face in securing provincial and territorial commitments to increase Canada’s protected areas — an accomplishment that would also address Canada’s growing biodiversity crisis.

The party also promised to create a $50 million B.C. old-growth nature fund — something advocates for old-growth have been calling for to help resolve conflicts such as the Fairy Creek blockades.

The Liberals promised to support Indigenous communities to enhance their capacity to establish more Indigenous protected areas and programs for Indigenous Guardians, which the Liberals began funding in 2017. The party also made a vague commitment to “restore and enhance more wetlands, grasslands, and peatlands, to capture and store carbon.”

The Liberals have already made good on many of the party’s climate change promises. They’ve put a price on carbon, set a 2030 target date to phase out coal-fired electricity, instituted an electric vehicle mandate, legislated Canada’s target of net-zero greenhouse gas emissions by 2050, set five year-national emissions reduction targets and passed the Net-Zero Emissions Accountability Act to deliver on their commitments.

The NDP committed to lower Canada’s emissions by 50 per cent below 2005 levels by 2030 and reach net-zero by 2050. But experts said the NDP’s plan was not detailed enough to assess whether the proposed policies would lead to reductions in line with the target.

There is uncertainty about Canada’s true greenhouse gas emissions, especially following a new study showing B.C.’s oil and gas facilities are producing up to 2.2 times more methane pollution than current federal estimates. The new research, published in Environmental Science and Technology, concluded that existing regulations are likely not strong enough to meet climate targets since they typically require inspections of leaking equipment with optical gas cameras that are likely failing to adequately measure methane.

Subsidizing the oil and gas sector during a climate emergency has been compared to driving a car toward a cliff and putting your foot on the accelerator instead of the brake.

The Liberal election platform committed to eliminating fossil fuel subsidies by 2023, ahead of the G20 target date of 2025. If re-elected, the Liberal Party says it will develop a plan to phase out public financing for the oil and gas sector, including from Crown corporations, consistent with the party’s commitment to reach net zero emissions by 2050.

Jonathan Wilkinson, Canada’s minister of environment and climate change before Parliament was dissolved for the election, said a re-installed Liberal government is “firmly committed” to phasing out mechanisms that incentivize the exploration and production of fossil fuels — but that money for oil and gas well clean-up is not included in that subsidy bucket.

There’s debate over what, exactly, constitutes a fossil fuel subsidy, and it’s unclear which definition the Liberals are using. In 2009, when Canada and other G20 nations first pledged to tackle fossil fuel subsidies, a collective promise was made to do away with “inefficient” subsidies. But the term inefficient has never been defined, allowing successive governments wiggle room.

Using the World Trade Organization’s definition of subsidy  — “a financial contribution by a government” that “confers a benefit” on its recipient — the International Institute for Sustainable Development says the Trudeau government handed out at least $600 million in fossil fuel subsidies in 2019 and at least $1.9 billion in 2020, including funding to clean-up orphaned and abandoned oil and gas wells in B.C., Alberta and Saskatchewan.

The environmental advocacy organization Environmental Defence takes a different approach, calculating that Canada dedicated $18 billion to assist the oil and gas sector in 2020. That figure includes $3.28 billion in direct spending and $13.6 billion in public financing for oil and gas companies — primarily from the opaque crown corporation Export Development Canada, according to the Environmental Defence report, Paying Polluters: Federal Financial Support to Oil and Gas in 2020.

Both the Bloc and the NDP pledged to eliminate fossil fuel subsidies.

The Just Transition and Economic Diversification

How will the new Liberal government handle the tough choices and trade-offs that come with an energy transition away from fossil fuels?

During the election campaign, the Liberals committed to establishing a $2 billion diversification fund for oil- and gas-producing provinces. The party also said it would set five-year emissions reduction targets for the oil and gas sector so it can achieve net-zero by 2050 — starting with 2025 and 2030 milestones to ensure the oil and gas sector makes a “meaningful contribution” to meeting Canada’s 2030 climate target.

Greenhouse gas emissions from the oil and gas sector have climbed 20 per cent since 2005 and now make up 26 per cent of our country’s total emissions, so this is an extremely important commitment.

The Liberals also committed to moving forward with responsible transition legislation, guided by consultation with communities that began shortly before the election was called, and to launch a clean jobs training centre to help workers upgrade or gain new skills to work in low-carbon industries.

The NDP promised to expand EI benefits, retraining, job placement services and retirement benefits for workers affected by the transition away from fossil fuels and to create “over a million new good jobs.” The party said it wanted to see the federal government devote another $1 billion to the worker transition between now and 2026, in addition to money in the current government budget.

Neither the Liberals nor any other political party in the election campaign could say exactly how their platforms would address the findings of a new scientific study that concludes Canada must keep more than 80 per cent of its oil, gas and coal in the ground in order to address the global climate crisis.

Overall, the scientists concluded that nearly 60 per cent of the world’s oil and gas and 90 per cent of its coal reserves must remain untapped in order to give the global community a 50 per cent chance of limiting warming to 1.5 C by 2050.

During the campaign, Liberal Party spokesperson Alex Deslongchamps told The Narwhal in an email statement the party’s focus is getting to net-zero by 2050 by “ensuring emissions from the oil and gas sector only go down from here.”

How the Liberal government’s purchase of the Trans Mountain pipeline will dovetail with the party’s net-zero pledge remains to be seen.

The Bloc said it would put an end to the Trans Mountain project, oppose any future oilsands projects and reject new projects related to the transportation of oil across provinces. The federal NDP has not committed to cancelling Trans Mountain, which was championed by the former Alberta NDP government.

“Nothing illuminates the vital importance of individual behaviour like an election. We know, objectively, that no single ballot is remotely likely to decide an election. Yet millions of us go to the trouble of voting anyway.” —Arno Kopecky in The Environmentalist’s Dilemma: Promise and Peril in an Age of Climate Crisis—soon to be released new book.

ICYMI:
Climate is Always Second Place To Fossil Fuels
Two Fatal Flaws with Net-Zero By 2050: Net-Zero and By 2050
We Need A Fossil Fuel Non-Proliferation Treaty