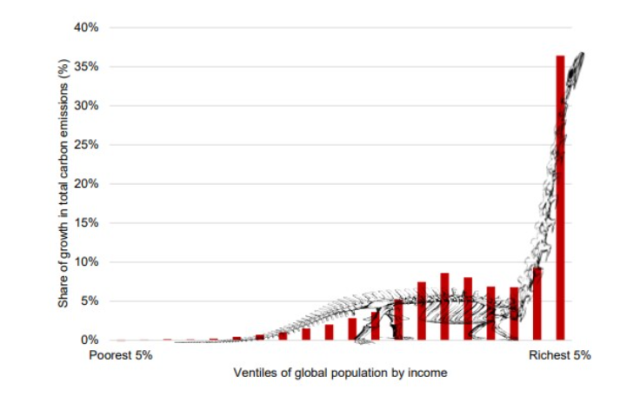 The disproportionate impact of the world’s richest people is unmistakable. The resulting graph looks like a brontosaurus – with a tall neck and long tail. This article is sourced from Citizens’ Climate Lobby Canada Laser talks.

The “tall neck” is the result of the fact that nearly half of the total growth in absolute emissions was due to the richest 10%, with the richest 5% alone contributing over a third (37%). The emissions linked to the top 1% alone grew more than three times as much as those linked to the bottom 50%.

The global carbon budget is a precious natural resource. These results suggest a need for increased attention to be paid to the ongoing porcine impact of the small minority of the world’s richest citizens and the enormous and continuing economic development needs of the world’s poorest citizens.

Our socio-economic and climate policies most certainly can be designed to address carbon inequality. In fact, Canada’s national backstop carbon pricing policy addresses the “brontosaur in the room” (2).

Data from Canada’s Parliament Budget Office confirms this assertion (3). Canada’s carbon pricing policy is a form of carbon fee and dividend. It is also known as climate income. Canada has put a revenue-neutral price on GHG pollution at the source, and gives 90% of the money back to the people equitably, regardless of income or carbon footprint. The other 10% of carbon fees collected go to the MUSH sector: Municipalities, Universities, Schools, and Hospitals. It also reduces GHGs (4) without creating burdensome tax policies for governments to administer.

ICYMI:
Creating a Balanced Future
Carbon Pricing Is the Most Silver Bullet-ish Policy We Know Of