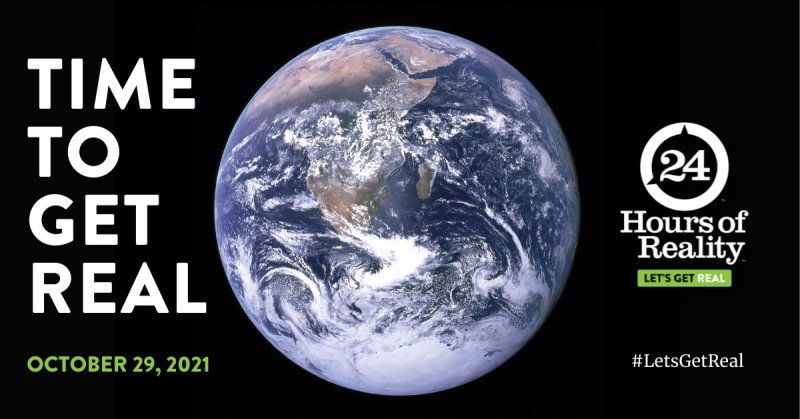 From October 31 to November 12, representatives of nearly 200 countries will meet in Glasgow, Scotland for the United Nations’ 26th Conference of Parties (COP 26) to consider the state of the climate crisis. There, they’re expected to review and strengthen the Paris Agreement, the international community’s framework for global cooperation on climate action. (This post is sourced entirely from the 24 Hours of Reality website.)

This August, UN Secretary-General Antonia Guterres called the latest report from the Intergovernmental Panel on Climate Change (IPCC) a “code red for humanity.” Our window to hold warming to the danger line of 1.5 degrees Celsius and avert the worst of climate change is rapidly closing. We’re already experiencing the climate crisis daily, as devastating weather remakes the world as we know.

If we fail, oceans could rise up to a meter or more by century’s end and warm up to eight times what we’ve seen in recent decades. Even more extreme heatwaves, droughts, fires, and hurricanes will become our new normal.

As we speed toward this unbearable outcome, it’s clearer than ever that the little we’re doing now isn’t enough. We must put real pressure on global leaders headed to COP 26 this November to commit to the real action we need.

Our chance to avert the most dramatic temperature increases is rapidly disappearing. It’s now or never.

Empty promises and corporate greenwashing have allowed the climate crisis to worsen, bringing on extreme weather, from flooding rains to record droughts. Even half-measure commitments have gone unmet, putting us on the short path to a disastrous future.

We need immediate action, to move quickly toward a zero fossil fuel emissions economy in a globally just transition to clean energy. Our point of no return is nearly here. We have to get loud, now, and together demand the REAL policy changes that can save us from the worst degrees of warming.

THIS IS OUR TURNING POINT AND I PLEDGE TO ACT

Our future is on the line!

For more information, see these FAQs:

WHAT IS COP 26?
WHAT IS 24 HOURS OF REALITY: LET’S GET REAL?
WHAT’S DIFFERENT ABOUT THIS YEAR?
WHAT DOES “REAL ACTION” REALLY MEAN?
WHAT DOES THIS HAVE TO DO WITH ME?
HOW CAN I PARTICIPATE?

ICYMI:
Is COP26 the Answer We’ve Been Waiting For Or a Dangerous Fantasy?
Two Fatal Flaws with Net-Zero By 2050: Net-Zero and By 2050