Below 2C
Home Socio-Politico Banks What do Heat Waves, Wildfires and Banks Have in Common?
Share to raise climate awareness

The recent leak of a draft of the next IPCC report (Intergovernmental Panel on Climate Change) warns that recovery from climate breakdown may be impossible as the impact of tipping points leads to far-reaching and perhaps irreversible disaster. Well, it turns out we don’t need the IPCC report to point that out. We’re getting a glimpse of climate chaos already with record-setting heatwaves, heat domes and runaway wildfires right here in Canada. 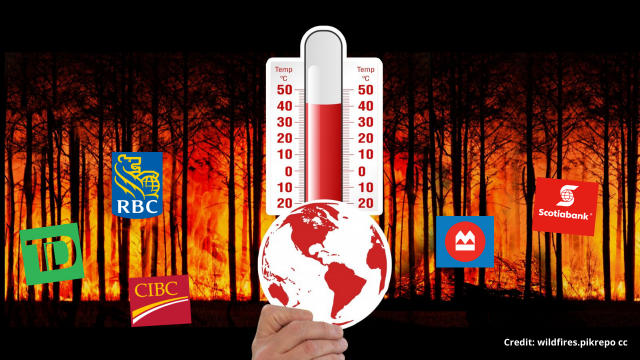 Hundreds of people in the American west and southwestern Canada have died in the last few weeks as a result of the extreme and unprecedented heat wave that shattered global temperature records. The town of Lytton in British Columbia was the epicentre of Canada’s most horrific weather event, shattering an all-time previous high of 45°C with a dangerous 49.6°C. Wildfires swept through the Lytton community in a matter of minutes leading one victim whose property was destroyed to say that “we’re the canary in the coal mine for climate change.”

So, what has this got to do with banks you might wonder. While heatwaves and wildfires are clearly a consequence of climate change – the effects of a warming planet – banks are institutions not affected by extreme events in a broad sense. But wait. While they do not suffer the effects of climate change, they continue to enable the conditions that cause heatwaves and wildfires.

What banks, heat waves and wildfires have in common is climate change. Banks, and their like—insurers, pension plans, and investment funds—shamelessly contribute to climate breakdown, climate chaos and climate disasters.

According to the Banking on Climate Chaos 2021 Report, between 2016 and 2020,  the world’s 60 largest banks financed fossil fuels to the tune of US$3.8 trillion since the Paris Agreement.

The report shows how Canada’s big five banks – RBC, TD, Scotia, BMO, CIBC – have poured C$726 billion into fossil fuels worldwide. This includes C$299 billion in fossil expansion and close to C$100 billion in the Tar Sands at a time when we need to dramatically reduce fossil fuel use.

Of the Big Five, RBC is Canada’s worst bank with fossil funding of C$208 billion since the Paris Agreement, ranking 5th worldwide. 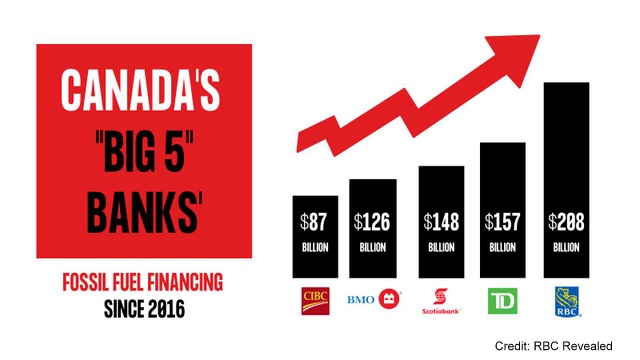 The Five Years Lost report released near the five-year anniversary of the Paris Agreement listed 12 fossil fuel expansion projects around the world that alone would use up 75% of the total remaining carbon budget. Canada’s big five banks are financing seven of those projects, with RBC alone providing US$24.7 billion.

Canada’s financial institutions are even playing a leading role in promoting the dirtiest fossil fuel—coal. During 2018-2020, four of Canada’s banks made the “dirty thirty” list of lenders, with RBC ranked as the 12th largest coal lender in the world while TD ranked 15th.

Our banks have recently come out with a flurry of announcements with empty ‘net-zero’ claims about ‘sustainable investment’ but these are seen as attempts to continue to funnel money into fossil fuel projects. Much more is needed to end the runaway fossil fuel finance and manage the transition to a clean energy future.

A recent tweet by the Canadian Banking Association backfired when our banks attempted to show their generosity in supporting those affected by the west’s extreme weather while totally ignoring their role in causing it. The $360,000 in donations is pocket money in comparison to the $726 billion poured into fossils since the Paris Agreement.

Banks in 🇨🇦 are here for all those affected by the devastating #BCFires. Several banks are donating a combined $360,000 to @redcrosscanada to support relief efforts & long-term recovery, and are accepting public donations in-branch + online.

Keeping the World Safe from Banks

How do we keep the world safe from our banks? We do it by exposing their major role in undermining the Paris Accord,  by calling out their net-zero 2050 greenwashing, by pressing governments to change the investment rules, by finally ending fossil fuel subsidies to make fossil fuel infrastructure a less attractive bet, and by legislating flexible regulations that encourage  clean tech investment.  Personally, we get involved in actions to stop new fossil fuel infrastructure and by moving our money away from Canada’s Big Five.