Below 2C
Home Climate Climate Breakdown Beyond Safe Limits: We Will Not Escape the Ravages of Climate Change 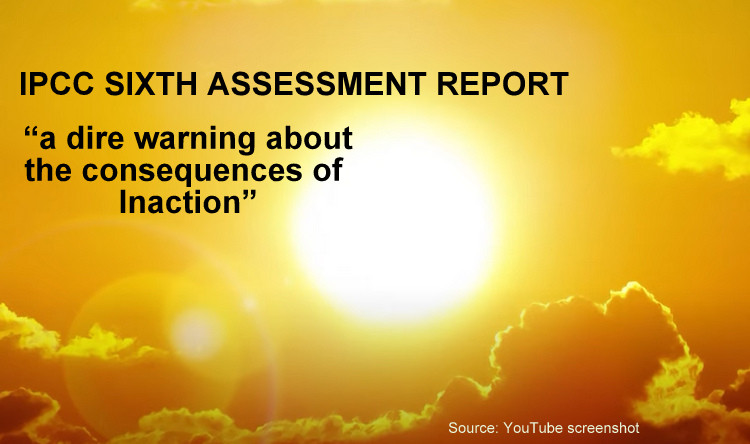 Many of the coming ravages of climate change are already baked in to the global heating our planet has already absorbed since the beginning of the industrial age. In some areas of the world, we are beyond safe limits and sliding irreversibly into complete climate breakdown.

(This article is part of The Energy Mix coverage of the latest IPCC report released just days ago.It was previously published in the Mix.)

Humankind is not just heading for a more dangerous future: for some people, the safe limits have already been passed, the Intergovernmental Panel on Climate Change shows in its climate impacts, adaptation, and vulnerability report this week.

Global supplies of food became more precarious a few years ago when the planet’s average temperature increased by 1°C: the risk of possible famine however is classed as moderate, the report states. But if the thermometer rises by 2.5°C, the risk to communities, regions, and whole nations becomes high, as harvests fail and flocks perish.

Food is inseparable from water supply. Right now, 800 million people experience chronic water scarcity. But if the temperature notches up to 2°C this figure reaches three billion, at 4°C, around four billion people will be in trouble. And that’s a calculation that factors in only the present population of the globe, and only the effects of climate change.

But of course that calculation does not and cannot incorporate the other hazards that come with a soaring mercury: the advance of tropical diseases; the chance of displaced, impoverished and malnourished people on the move; the arrival of new crop pests; and the risk of conflict fuelled by drought or heat. Not to mention the damage to natural ecosystems on which all human health and wealth ultimately depend as the insects that pollinate human crops, or dispose of waste, are winnowed at ever-higher temperatures.

Human-driven climate change threatens the natural world. If the thermometer rises to 3.2°C, 49% of insects will lose half of their range, along with 44% of plants and 26% of vertebrates.

And this forbidding outlook has still to take account of potentially catastrophic impacts of climate extremes — floods, wildfire, droughts, windstorms, heat waves, and so on. Bad things that happen perhaps every 10 years or so in normal circumstances become 1.7 times more likely at a thermometer rise of 2°C, and 2.7 times more likely if the mercury rises by 4°C.

The report makes clear that the poorest will once again be all too often the first victims. Climate change driven by higher average temperatures will increase the number of the undernourished by tens to hundreds of millions worldwide. And windstorms, floods, droughts, and heat waves driven by the same rising temperatures will increase the risks of under-nutrition on regional scales, with ever-higher food prices and ever-more reduced income.

Quite how bad things get will depends not just on what a hotter atmosphere brings to the weather machine, but on how human societies decide to respond. But in a high warming scenario involving high vulnerability, another 183 million people could become undernourished in low-income countries by 2050.

The chapter on risk in the working group report is composed in the usual intergovernmental language of coma-inducing initials, puzzling labels, and difficult-to-define abstractions: “SSPs” or shared socioeconomic pathways, “RFCs” or reasons for concern, global aggregate impacts, “RKRs” or representative key risks, and so on.

The stuff of nightmares

But it also promises the stuff of nightmares. The unemotional labeling and the careful use of language confirm a picture of a menacing future that, in some aspects, arrived quietly a few years ago. And it portends a much more dangerous world that hovers on the horizon, as long as global temperatures continue to rise.

One factor makes this report different from its predecessors. Because more evidence is available with each passing year, and the IPCC authors have examined and evaluated it carefully, scientists can now attribute this or that shift in the human condition directly to climate change driven by ever-increasing use of fossil fuels, resulting in ever greater destruction of natural ecosystems. And they can make these attributions with higher levels of confidence.

Furthermore, where they can the researchers have looked at the task set for them—which includes not just impacts, but adaptation and vulnerability—to confirm that, when it comes to taking serious action, humankind has a long way yet to go.

A future of Adaptation

Can the world adapt? “Global adaptation is predominantly slow, siloed, and incremental with little evidence of transformative adaptation,” the authors say. There are limits to how much humans or living ecosystems can adapt, they add, but while “there is limited evidence to suggest these limits are being challenged or overcome,” there have been only a few documented responses that “are simultaneously widespread, rapid and novel.”

The authors address already predictable hazards assessed with ever-greater confidence: the numbers, for instance, increasingly at risk from sea level rise, as the ice caps melt and glaciers recede and oceans get warmer. It considers not just the threat to the coral reefs—and the point at which they can no longer recover from bleaching episodes fuelled by extreme ocean temperatures—but the risk to human communities at sea level that might once have been kept safe by a healthy reef, mangrove forest, or salt marsh.

The transition for “high” risks, the authors point out, happens at a temperature rise worldwide of 0.9°C, “with an upper bound at the present day level of global warming of 1.2°C. The general picture is one of annual or more frequent occurrences of severe extremes with widespread impacts… and of multiple extremes, meeting the criteria for the ‘severe and widespread’ nature of risks that is required for classification at a ‘high’ level of risk.”

This is another way of saying that the authors have taken considerable care not to overstate the degree of risk. It is also another way of warning that large numbers of humans could be heading for climate catastrophe.

For example, if the thermometer reaches 1.5°C above the long-term average for most of human history, then 40% of all megacities will experience at least one day a year in which the urban thermometer passes a potentially lethal 40.6°C. At 2.7°C higher, this number reaches 65%, and at 4°C, around 80%. And there is high risk of concurrent heat extremes at different locations, with several cities hit by murderous heat waves at the same time.

In most cases, the authors stick to probabilities, and measures of high or medium confidence, rather than arriving at overall numbers of humans who could see their homes, livelihoods, and loved ones swept away by floods, or scorched by fire, or reduced to misery by hunger and drought.

One problem is methodological. Research teams that provided the raw material for this overview—there are more than 50 pages of citations for this one chapter on risk—started with different assumptions and used different methods, and it’s not easy to be sure that gross estimates of potential victims can be derived by simple addition or an average of estimates.

“The other reason why we haven’t got numbers is because so much depends on what we do as a society,” said Rachel Warren,professor of global change and environmental biology at the United Kingdom’s Tyndall Centre for Climate Change Research, and lead author of the chapter on risk.

“This is one of things I think is really, really clear in the report. Yes, things are bad, but actually the future depends on us, not the climate. There is no point in predicting heat deaths in the future, because that depends on what kinds of adaptations we want to put in place,” she said.

“That’s why there aren’t any numbers. It is not a watering down. It reflects the fact that this depends on us.”

(The next article in this series will be about adaptation to the changing climate.)

ICYMI:
“Atlas of Human Suffering” Says UN Secretary General
Nuclear Power Is Not A Responsible Investment
Unless We End Financing of Coal, It Will End Us