Below 2C
Home Energy Coal Unless We End Financing of Coal, It Will End Us 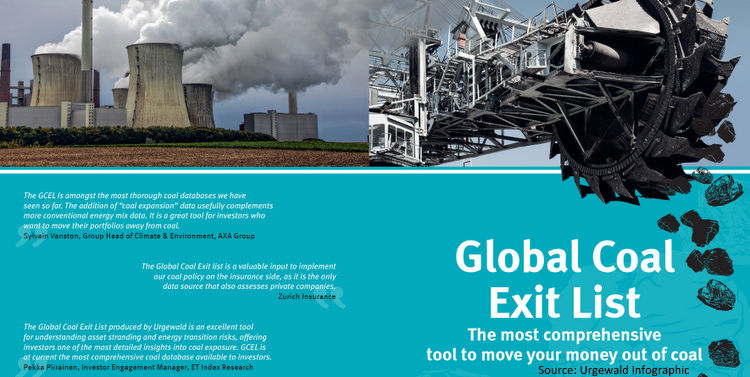 The 2018 IPCC Report stated emphatically that coal-fired power production worldwide must be reduced by 78% by 2030 to keep the world on a 1.5°C pathway. The more recent IEA NetZero by 2050 report confirms that no new coal mines or power plants can be developed. Yet financial institutions continue to pump trillions into the coal industry. “Unless we end financing of coal, it will end us,” says Katrin Ganswindt at Urgewald.

A group of NGOs—Urgewald, Reclaim Finance, Banktrack, 350.org Japan and 25 other NGO partners—has recently published research on investors behind companies on the Global Coal Exit List (CCEL). According to this research, “commercial banks channeled over US$1.5 trillion to the coal industry between January 2019 and November 2021.”

(Excerpts and quotes for this post are from Banktrack, Stand.Earth and Urgewald.)

The Global Coal Exit List covers 1,032 companies. Their activities range from coal mining, trading and transport to the conversion of coal to liquids, the operation of coal-fired power stations and the manufacturing of equipment for new coal plants. “Banks like to argue that they want to help their coal clients transition, but the reality is that almost none of these companies are transitioning. And they have little incentive to do so as long as bankers continue writing them blank checks,” says Ganswindt.

Between January 2019 and November 2021, 376 commercial banks provided US$ 363 billion in loans to the coal industry. But just 12 banks accounted for 48% of total lending to companies on the GCEL. The full list is available  on coalexit.org/finance-data.

Ironically, 10 of the top 12 lenders to the coal industry are members of the Net Zero Banking Alliance. “At the time when it counts most – today – most of these banks are still channeling billions of dollars to the coal industry. It is not enough to make net zero promises for the distant future and only inch towards them reluctantly,” says Eri Watanabe from 350.org Japan.

Support for the coal industry is also provided through underwriting services as well as direct loans. “Both actions lead to the same result: Vast amounts of cash are provided to an industry that is our climate’s worst enemy,” says Ganswindt.

If lending and underwriting are viewed together, the following picture emerges: Banks from only 6 countries – China, the US, Japan, India, the UK and Canada – were responsible for 86% of overall bank financing for the coal industry.

In 2022, RBC financing fossil fuels while spouting sustainability is like handing out cigarettes while warning about the dangers of smoking,” said Richard Brooks with Stand.earth.

In its recent media release, Stand.Earth says that “despite Canada’s commitment to phasing out thermal coal electricity within eight years, Canadian banks are continuing to lend and invest more than USD$100 billion (CAD$127.23 billion) to coal-related companies, including in Canada.”

While communities across Canada and around the world experience devastating climate impacts from fires to floods, Canada’s fossil banks continue to finance coal-related companies with impunity and complete denial of climate science.

The findings from Urgewald show that RBC is one of Canada’s biggest backers of thermal coal, with almost USD$11 billion (CAD$14 billion) of lending and financing to coal related companies, and holding USD$6.5 billion (CAD$8.3 billion) in bonds and shares.

“Ending coal-fired electricity is one of the single most important steps the world must take in the fight against climate change. Canada and the United Kingdom, as co-leads of the Powering Past Coal Alliance (PPCA), continue to drive the global momentum towards that end,” said the news release by Canada and the UK in Glasgow during COP26 following the announcement of 28 new members. The Alliance now totals over 165 members.

And yet, while members of the Alliance are working to stop the world from burning coal, the actions of banks, institutional investors and underwriters show quite the opposite.

Unless we end financing of coal, it will end us.

ICYMI:
Canada’s Banks Among The ‘Dirty Thirty’ Lenders To Global Coal Industry
Clean Energy: An Idea Whose Time Has Come
Shameful: Canada Is a World Leader for Fossil Fuel Finance