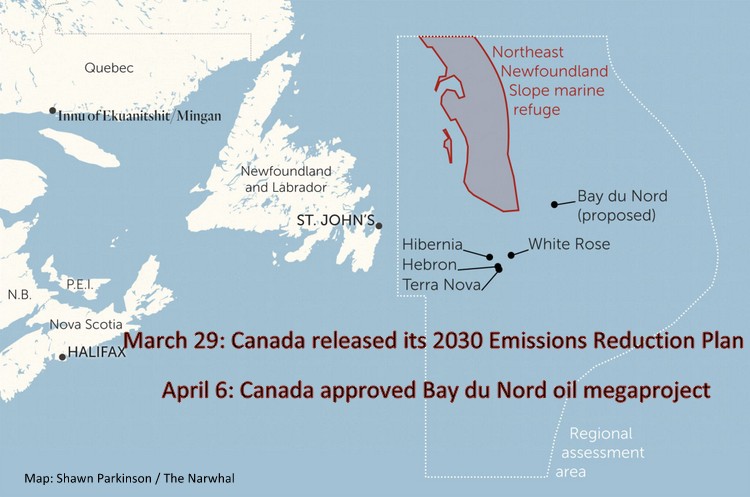 With the approval of the Bay du Nord offshore oil megaproject, Canada has now solidified its hold as the world’s top climate con artist,rogue and villain. Bay du Nord is yet more evidence that Canada’s Emissions Reduction Plan and Climate Plan are bogus—a sham.

Climate Plan Is a Sham

Environmentalists and climate-concerned Canadians rejoiced when former climate crusader Steven Guilbeault was named Minister of Environment and Climate Change. With his credentials, surely he’d be able to accomplish what previous climate ministers failed to do. But with the approval of the Bay du Nord oil megaproject, he has succumbed to Justin Trudeau’s fossil fuel mania and love affair with the oil and gas sector.

In the hours leading up to the announcement, Minister Guilbeault tried to sugar-coat the decision with a news release and backgrounder that would have one believe that Bay du Nord will produce nothing but “clean oil”. Statements to deflect attention away from the fact that Canada continues to expand fossil fuel production and exports include:

“By working closely together, with provinces, Indigenous Peoples, and communities, we are succeeding in protecting nature, halting biodiversity loss, and fighting climate change. On land, since we formed government, we have protected habitat equal to almost half the size of Manitoba. On Canadian marine areas, we have gone from 1 percent to 14 percent areas protected. Today’s announcement is concrete action from both levels of government on these goals that are important to us all.” – The Honourable Steven Guilbeault, Minister of Environment and Climate Change

Well, Mr. Guilbeault, what is “important to us all” is to reduce emissions, and Bay du Nord will not to that, not domestically, not globally. Whatever credibility Guilbeault might have brought with him from his environmental days has now been shot out of a canon. The Bay du Nord decision is a “failure of courage” said Caroline Brouillete at the Climate Action Network Canada.

Slap in the face to Science and the IPCC

“The federal cabinet administered what one critic called a “slap in the face” to climate science with a decision today to approve the massive Bay du Nord oil and gas megaproject off the Newfoundland coast,” wrote Mitchell Beer in The Energy Mix. “Environment and Climate Minister Steven Guilbeault announced the decision just two days after the latest warning from the Intergovernmental Panel on Climate Change that humanity is less than 10 years away from exceeding a carbon budget that would deliver just 50-50 odds of holding global warming to 1.5°C.”

In his speech following the release of the IPCC climate mitigation report— Antonio Guterres said “Climate activists are sometimes depicted as dangerous radicals. But the truly dangerous radicals are the countries that are increasing the production of fossil fuels.” And there is no greater dangerous radical than Canada which is the only G7 member on a pathway to increasing emissions.

“But high-emitting governments and corporations are not just turning a blind eye; they are adding fuel to the flames. They are choking our planet, based on their vested interests and historic investments in fossil fuels, when cheaper, renewable solutions provide green jobs, energy security, and greater price stability.” — Antonio Guterres

It Makes No Sense – Unthinkable

We keep losing too many battles in the war on climate change. Saying NO to Bay du Nord should have been a no-brainer and a climate win for the Trudeau government. Angela Carter (University of Waterloo professor) calls the decision “unthinkable”. Carter told the Mix “the federal government signalled yet again that it is not serious about the climate crisis. Because we can’t have it both ways. We can’t make lofty emissions reduction commitments and keep expanding oil and gas production. It’s just another signal that the federal government doesn’t get it.”

In The Ministry for the Future, author Kim Stanley Robinson writes about an agency that poses idealistic gestures to make people think that extraordinary efforts are being made to tackle climate change, when really, they are not. Could Robinson have been thinking of Justin Trudeau’s Liberal government?