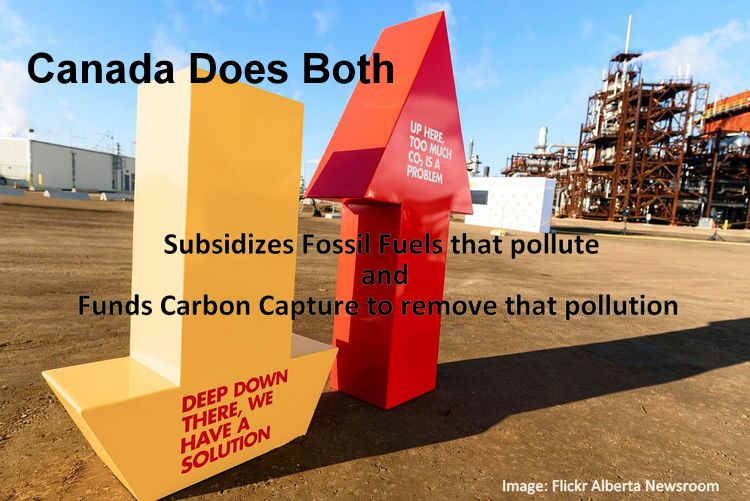 (This article was previously published in the Environmental Defence blog by Julia Levin and adapted for Below2C.)

There is something fundamentally flawed with the logic of subsidizing the production of  fossil fuels that pump emissions into our atmosphere, and then, providing massive funding to support carbon capture projects to suck that same pollution back out. The word stupidity comes to mind. (Editor)

The Government of Canada continued providing financial support to an industry that we need to be winding down in order to avoid catastrophic levels of warming.  —Environmental Defence

2021 was a horrific year for climate disasters in Canada and around the world. Yet even as communities across the country were fleeing their homes – because of heat domes, atmospheric rivers, wildfires, droughts and floods – the Government of Canada provided $8.6 billion in subsidies and supports to the industry at the root of this crisis.

This is a substantial use of taxpayer money that was used to make it cheaper to find, extract, process, transport and export fossil fuels. It’s especially egregious considering that this is an  industry that must be phased out to ensure a safe future.

Due to a lack of transparency and public reporting, quantifying yearly financial support provided to the oil and gas sector by the Government of Canada and its agencies remains a difficult task. As a result, the numbers included here are certainly underestimated.

The report also provides the first estimate of public funding for carbon capture, utilization and storage (CCUS) projects in Canada. CCUS is touted by the oil and gas lobby as a way of cutting emissions, by capturing carbon before it escapes into the air. But carbon capture is not a climate solution – its use in the energy sector only serves to prolong our dependence on fossil fuels. Oil and gas companies know these are dead-end technologies which won’t make a dent in emissions, but are using them anyway to delay the clean energy transition and wring out even more subsidies.

Despite massive taxpayer subsidies, collectively these expensive projects only capture around 3.55 million tonnes of carbon per year – which represents 0.05 per cent of Canada’s greenhouse gas emissions. 70 per cent  of the carbon captured in Canada is used for enhanced oil recovery – i.e., more production. Therefore these huge public subsidies have likely resulted in more emissions, rather than less.

The CCUS handouts could grow exponentially, depending on a new investment tax credit set to be released in the upcoming federal budget.

The most important steps for decarbonizing Canada’s economy are increased electrification, wide-scale use of renewable energy and increasing energy efficiency – yet these sectors have received limited government support.

With smart investments of public funding we could build a more resilient future where everyone can thrive. This will require a planned and deliberate phase-down of the oil and gas industry, with a just transition to ensure no one gets left behind. We have the solutions – they are affordable, available and reliable. Now we have to fund them. 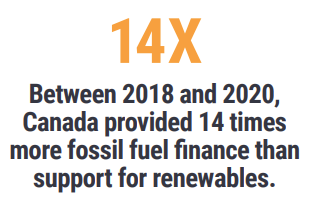 The pathway to zero emissions and a climate-safe future does not include subsidies or public financing for the oil and gas industry. It’s time for Canada to turn off the financial taps.

We know that oil and gas companies are dumping emissions in the atmosphere. We know that emissions are causing global warming. We also know that we are in a climate crisis caused by the burning of fossil fuels. And finally we know that climate change is an existential crisis. Our survival is a stake. (Editor)